5:02pm: The Magic have officially signed Isaac to his extension, the team announced in a press release.

4:31pm: Shortly after reaching an agreement on an extension for Markelle Fultz, the Magic have done the same for Jonathan Isaac. Agent Jeff Wechsler tells Adrian Wojnarowski of ESPN (Twitter link) that Isaac and the Magic have agreed to a four-year, $80MM deal, which will begin in 2021/22. 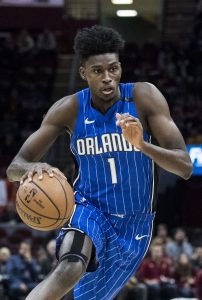 However, a severe left knee sprain and bone bruise sidelined him on January 1, and his comeback effort during the Orlando summer restart was abruptly halted in early August by a torn left ACL.

Despite the fact that Isaac will miss the entire 2020/21 season while rehabilitating that knee injury, the Magic were willing to lock in a new deal for him early, preventing him from reaching restricted free agency in 2021. That signals not only that Orlando views the 23-year-old as an important part of its future, but also that the team feels good about where he’s at in his recovery and rehab process.

While it remains to be seen how Isaac’s offensive game will develop, he’s already one of the NBA’s most talented and versatile defenders when he’s healthy. If he returns to full health and improves on offense, the contract could actually end up being a bargain for the Magic, but it’s still a significant roll of the dice for the club.

Isaac will earn $7.36MM in the final year of his rookie scale contract in 2020/21 before his new deal begins. He’s the eighth player to agree to a rookie scale extension this offseason, narrowly beating Monday’s deadline (5:00pm central time).