5:01pm: Fultz’s extension is now official, according to the Magic. 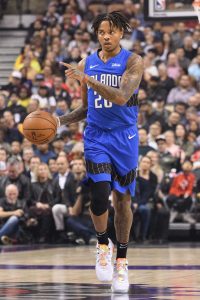 4:18pm: The Magic have agreed to sign former No. 1 overall pick Markelle Fultz to a three-year rookie scale extension worth $50MM, agent Raymond Brothers tells ESPN’s Adrian Wojnarowski (Twitter link). The deal, which will begin in 2021/22 after Fultz earns $12.3MM this season, includes a third-year team option, according to Josh Robbins of The Athletic (Twitter link).

Philadelphia traded up in the 2017 draft to select Fultz, but he was limited to 33 games in a season-and-a-half with the Sixers, as he dealt with a troublesome shoulder injury and struggled to regain the form that made him the top prospect in his class.

Fultz’s new deal is an interesting one for him and the Magic, and is comparable to a few other rookie scale extensions signed in the last couple years by players who have dealt with injuries. Luke Kennard‘s new four-year, $56MM contract (which includes $8MM in additional incentives) is in the same range, as is Dejounte Murray‘s deal from a year ago (four years, $64MM, plus $6MM in incentives).

The closest comparable may be the three-year, $52.5MM extension Caris LeVert signed with the Nets a year ago. Like LeVert, Fultz only signed for three years, putting him in position to potentially reach unrestricted free agency in his prime — he’ll be just 26 years old when his new contract expires.

Fultz is one of two Magic players to reach an agreement today on a rookie scale extension, joining fellow franchise cornerstone Jonathan Isaac.