7:12pm: It’s official, according to a team press release. 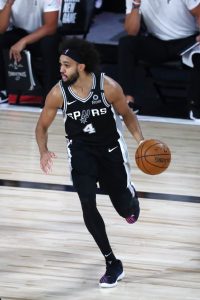 5:08pm: The Spurs have reached an agreement on a four-year extension for guard Derrick White, agent Mike Lindeman tells Adrian Wojnarowski of ESPN (Twitter link). It’ll be worth $73MM, per Wojnarowski.

San Antonio’s strong commitment to White comes after a season in which he was just a part-time starter. White averaged 11.3 PPG, 3.3 RPG and 3.5 APG in 24.7 MPG in his third year in the league. He started 20 of 68 games after starting 55 of 67 games in his second season.

However, the Spurs recently signaled their intentions of retaining the combo guard long term when coach Gregg Popovich remarked, “He’s somebody we plan on for the future.”

White was the 29th pick of the 2017 draft. The Spurs backcourt is now set for years to come as they signed Dejounte Murray to a four-year extension worth up to $70MM last year.

With several veteran players coming off the books after this season, San Antonio will still have plenty of cap flexibility next summer. Factoring in White’s cap hold, the Spurs only sacrificed $6MM in space for the 2021 offseason. San Antonio could still have $50MM in cap room even with White’s extension factored in, Bobby Marks of ESPN tweets.