MARCH 29: The Spurs have made it official with Dieng, announcing in a press release that they’ve signed him to a new contract. 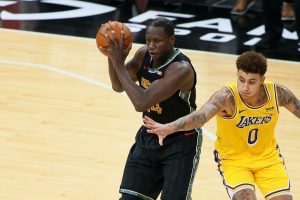 San Antonio doesn’t have an open roster spot, so Marquese Chriss will be waived to make room for Dieng, as Shams Charania of The Athletic first reported (via Twitter). Chriss, who is out for the year with a broken right fibula, was acquired from the Warriors on Thursday. His $1.8MM contract expires at the end of the season.

The Grizzlies waived Dieng on Friday after failing to find a taker for him by the trade deadline. His $17.3MM contract limited the options for Memphis on the trade market.

Dieng has played in just 22 games this season and was averaging 7.9 points and 4.5 rebounds per night. He had fallen behind Xavier Tillman in the rotation and didn’t appear to have a future with the Grizzlies.

Dieng will officially clear waivers at 5pm today. The 31-year-old will provide another veteran front court option for San Antonio, which reached a buyout agreement with LaMarcus Aldridge on Thursday.