AUGUST 6: Powell has officially signed the contract, according to a team press release.

“Re-signing Norm was a priority this offseason and we are pleased that he chose to make a long-term commitment to Portland,” president of basketball operations Neil Olshey said. “We look forward to him building off his career year and are confident he will play an integral role in the future success of our franchise.”

AUGUST 2: The Trail Blazers have struck a deal with their top free agent, according to ESPN’s Adrian Wojnarowski (Twitter link), who hears from agent Thaddeus Foucher that Norman Powell has agreed to a five-year, $90MM contract to remain in Portland. 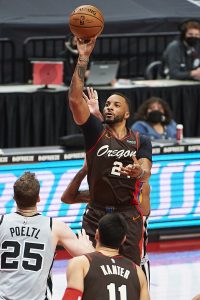 Ahead of the 2021 free agency period, Powell decided to not exercise his $11.6MM player option for the 2021/22 season, confident (and rightfully so) that, as one of the best wings on the free agent market, he was in line for a major raise.

Chris Haynes of Yahoo Sports adds (via Twitter) that the fully-guaranteed deal has no player options for the conclusion of the contract.

Powell was selected by the Raptors with the No. 46 pick out of UCLA in the 2015 draft. He won a title with the team in 2019. After spending his entire career in Toronto, the 6’3″ swingman was shipped to Portland in a deadline deal during the 2020/21 season.

His positional height deficiencies on the wing are not out-of-place in Portland, where he will line up next to the similarly-undersized 6’3″ shooting guard CJ McCollum.