AUGUST 7: The trade is now official, the Grizzlies announced in a press release. While Merrill’s salary for 2021/22 is not yet fully guaranteed, Memphis intends to guarantee his deal and keep him on the roster, reports Tony Jones of The Athletic (Twitter link). 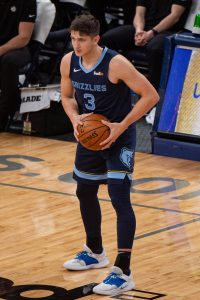 Allen, who is entering his fourth NBA season, had a breakout year for Memphis in which he started 38 of 50 games and averaged 10.6 PPG, 3.2 RPG and 2.2 APG. The former Duke star has knocked down 38.1% of his 3-point attempts during his three-year career and will give the Bucks another perimeter option.

Milwaukee will absorb Allen’s contract using a $4.89MM traded player exception generated by a deal this past winter that sent guard D.J. Augustin to the Rockets, according to Bleacher Report’s Jake Fischer (Twitter link).

Allen has an expiring $4.1MM contract and is eligible for a rookie scale extension. Merrill has a $500K guarantee on his contract and his $1.5MM deal will become fully guaranteed if he’s on Memphis’ roster through Sunday, ESPN’s Bobby Marks tweets. It’s uncertain whether Memphis plans to keep Merrill, a 2020 second-pick who appeared in 30 regular season games with the Bucks.

Milwaukee’s projected luxury tax bill will jump via this acquisition. The team’s luxury tax penalty will increase from $36MM to $44MM, Marks notes in a separate tweet. Milwaukee is right at $200MM in salary and luxury tax, Marks adds.