The Heat have officially re-signed sharpshooter Duncan Robinson, the team announced today in a press release. The five-year, $90MM deal, which reportedly includes an early termination option after the fourth year, was one of the first agreements reached during the free agent period on Monday. 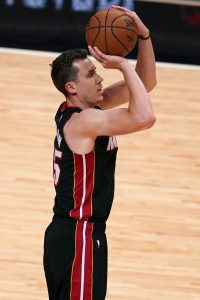 “Duncan is the epitome of everybody who’s ever had a dream about being a great NBA player,” team president Pat Riley said in a statement. “I have never been around a player who worked as hard, fastidiously working on what he needed to do in order to improve his game. Not just his shooting, but his overall game. Having Duncan back was very critical for us.”

If the Heat had used cap room this summer, it would have made sense for them to keep Robinson’s small cap hold on their books while they used up all their space, then go over the cap to finalize his deal. However, the club will operate over the cap instead, having agreed to acquire Kyle Lowry via sign-and-trade rather than signing him with cap room. As such, there was no reason not to complete Robinson’s contract right away when the moratorium lifted today.

That Lowry deal is not yet official, as the Heat and the Raptors have spent much of the week negotiating the terms of the sign-and-trade, but it should just be a matter of time before the two teams figure it out and make an announcement.