AUGUST 21: The Celtics have officially signed Smart to his extension, the team announced today in a press release. 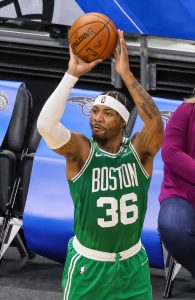 “There’s nowhere else I’d rather play and no other fans I’d rather play in front of. I love Boston, and Boston loves me,” Smart said in a statement. “We’ve had some great moments and success in my time here, but there’s more to accomplish. I’m ready to put that Celtics jersey back on and get to work out on the Parquet with my teammates.”

AUGUST 16: Longtime Celtics guard Marcus Smart will sign a four-year, $77.1MM contract extension with the team that drafted him, per Shams Charania of The Athletic (Twitter link). Charania adds that the deal will include a trade kicker.

Smart’s new contract is fully guaranteed through 2025/26. There is no player option, according to Adrian Wojnarowski of ESPN, who notes that the new agreement will begin during the 2022/23 season.

Originally selected with the No. 6 pick in the 2014 draft out of Oklahoma State, Smart first re-signed with Boston on a four-year, $52MM deal that will take him through the 2021/22 season. A two-time All-Defensive Team selection, the 27-year-old guard has proved to be a valuable addition during seven playoff-bound NBA seasons with the Celtics.