AUGUST 6: The Mavericks have officially signed Bullock, the team announced in a press release. There had been whispers that the Knicks and Mavs might explore a sign-and-trade arrangement, but Dallas ended up signing the veteran wing outright. 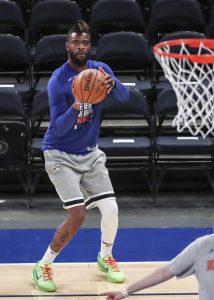 Agent David Bauman tells Shams Charania of The Athletic (Twitter link) that Bullock’s three-year deal with Dallas will be worth $30.5MM. Based on that value, it sounds like the Mavs will give Bullock their full mid-level exception if they operate over the cap.

The Mavs appear to be prioritizing adding shooting around star Luka Doncic, and Bullock certainly fits that bill. The 30-year-old is a career 39.2% shooter from beyond the arc and knocked down 41.0% of his three-point attempts for the Knicks this past season.

After an injury-plagued 2019/20 campaign, the former UNC standout bounced back with one of the best years of his career, averaging 10.9 PPG and 3.4 RPG while starting 64 games and averaging 30.0 minutes a night for the East’s No. 4 seed.

Dallas has been busy on the first day of free agency, having also agreed to terms with Tim Hardaway Jr., Boban Marjanovic, and Sterling Brown.