Will Barton Re-Signs With Nuggets On Two-Year Deal

AUGUST 11: The signing is official, according to a team press release. 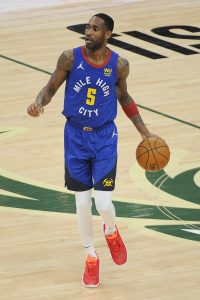 AUGUST 2: Free agent Nuggets swingman Will Barton is set to return to Denver on a two-year, $32MM deal, per Chris Haynes of Yahoo Sports (Twitter link).

Barton, 30, was originally drafted by the Trail Blazers in 2012 out of Memphis with the No. 40 pick. He has been a core role player in Denver since being sent to the Nuggets during the 2014/15 season.

Barton last inked a four-year, $53MM deal with Denver ahead of the 2018/19 season. Earlier this summer, he declined his $14.7MM player option for the 2021/22 season in the hopes of nabbing a pay raise and more guaranteed long-term money.

The Nuggets, led by reigning MVP Nikola Jokic and guard Jamal Murray, are hoping to rebound from a disappointing 2021 playoffs, in which they were swept out of the second round by the Suns in part due to the absence of Murray, who continues to recover from a left ACL tear.