Hoops Rumors is breaking down the 2021 offseason for all 30 NBA teams, revisiting the summer’s free agent signings, trades, draft picks, departures, and more. We’ll evaluate each team’s offseason moves and look ahead to what the 2021/22 season holds for all 30 franchises. Today, we’re focusing on the San Antonio Spurs.

It’s been more than two decades since the Spurs have needed to rebuild, but it appears the youth movement is now fully underway in San Antonio. The veteran core that led the team to the play-in tournament last season is gone, and the roster is constructed around a promising group of 25-and-under players.

The transformation began last winter when San Antonio shut down and eventually reached a buyout agreement with LaMarcus Aldridge, who was the starting center for the first half of the season. DeMar DeRozan, Rudy Gay, and Patty Mills all departed in free agency over the offseason, speeding up the transition to a younger group. 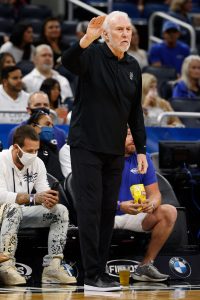 Gregg Popovich, the league’s oldest and longest-tenured head coach, has welcomed the opportunity to start teaching again after so many years of having a veteran-laden team. The Spurs are now led by 25-year-old Dejounte Murray, who leads the team in points, assists and steals through the early part of the season; 22-year-old Keldon Johnson, who earned a spot on the U.S. Olympic team; and 25-year-old Jakob Poeltl, whose strong play last season led to the decision to part with Aldridge.

The Spurs spent the summer searching for players to complement their young nucleus. They added a sharpshooter by acquiring Doug McDermott from the Pacers in a sign-and-trade deal that didn’t cost them any assets besides cap room. McDermott is a career 40.7% shooter from three-point range who should help stretch opposing defenses and provide plenty of driving lanes for San Antonio’s guards.

More shooting came through a reunion with Bryn Forbes, who played a role off the bench for the champion Bucks last year after spending his first four NBA seasons in San Antonio. Forbes, whose modest $4.5MM deal fit into the room exception, is another deadly outside threat, connecting at 41.2% for his career from beyond the arc.

The Spurs gambled on former Trail Blazers big man Zach Collins, who has been through multiple foot surgeries over the past two years and was limited to a combined 11 games in that time. Collins agreed to a three-year, $22MM contract, but the only guarantees are $7MM for the first season and half of his $7.35MM salary in the second season. The team hopes Collins will be ready to start playing sometime after Christmas.

The other significant offseason addition was Thaddeus Young, who was part of the return in the sign-and-trade that sent DeRozan to Chicago. Now in his 15th NBA season, the 33-year-old power forward brings a touch of veteran leadership to the roster and figures to be in demand at the February trade deadline.

Al-Farouq Aminu, who was acquired from the Bulls in the same deal, was waived before the start of the season, despite having a guaranteed $10MM+ salary. The Spurs also opted to part with Luka Samanic, whom they took with the 19th pick in the 2019 draft. He’s only 21, but San Antonio had more than 15 players with guaranteed contracts in camp and Samanic didn’t produce enough in his two years with the organization.

The Spurs provided one of the surprises of this year’s lottery, using the 12th pick on Alabama guard Joshua Primo, who was the youngest player in the draft. Primo has already been assigned to the G League and may spend much of the season there so he can get regular playing time and develop his skills.

With the 41st pick, San Antonio drafted Iowa guard Joe Wieskamp, another shooting specialist. He has also been sent to the G League, and like Primo, is considered more of a long-term prospect than someone who will help right away.

The Spurs reaching the playoffs used to be the safest bet in sports — they got there in a record 22 consecutive seasons. Those days are gone now, as the rebuilding team that may be a long shot to return to the play-in tournament. Instead of molding a title contender, Popovich will focus on developing his youngsters and paving the way for the next era of Spurs basketball.

The Spurs have drafted well over the years and have plenty of talent on the roster. Derrick White, Devin Vassell and Lonnie Walker IV are other intriguing members of the young core, and San Antonio has plenty of roster flexibility, with no player earning more this season than Murray’s $15.4MM salary.

The most pressing question about the Spurs’ future is how much longer Popovich plans to be part of it. With his 73rd birthday looming in January, he’s already the oldest coach in NBA history and he accomplished a major career goal over the summer when he led Team USA to an Olympic gold medal.

There have been conflicting rumors about Popovich’s plans for the future, but the latest report indicates the Spurs are expecting him to step down within the next two years. Before that happens, he almost certainly will pick up the 23 victories he needs to become the all-time leader in coaching wins. Popovich may not coach another title contender before he leaves, but he can develop some of the players that could eventually take San Antonio to that level again.