6:22pm: Both moves are official, the Mavericks announced (via Twitter). 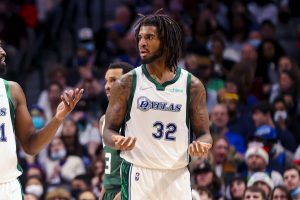 4:08pm: The Mavericks will sign hardship addition Marquese Chriss to a two-year contract, tweets Shams Charania of The Athletic. Willie Cauley-Stein will be waived to make room on the 15-man roster.

Chriss, who signed his third 10-day deal with Dallas under the hardship provision earlier this week, has been productive since joining the team in December. He has appeared in 12 games, all off the bench, and is averaging 6.8 points and 3.9 rebounds in 11.8 minutes per night.

Chriss will earn a prorated minimum salary for the rest of the season and a standard minimum in 2022/23 for a player with six years of service, giving him roughly $3MM overall, tweets Bobby Marks of ESPN. It’s unclear at this point if next season’s salary will be guaranteed.

The 24-year-old was taken by the Suns with the eighth pick in the 2016 draft, but hasn’t lived up to the promise he showed during his rookie season. He also spent time with the Rockets, Cavaliers and Warriors, but was out of the league until COVID-19 forced teams to seek emergency replacements.

Cauley-Stein is in his seventh NBA season and his third with the Mavericks. He’s averaging 1.9 points and 2.1 rebounds in 18 games, but hasn’t played since November 27.

The 28-year-old center is making $4.1MM on an expiring contract. Dallas will still owe him the remainder of that salary (about $1.95MM) unless he is claimed on waivers, according to Marks (Twitter link). The sixth pick in the 2015 draft, Cauley-Stein signed with the Mavericks as a free agent before the start of the 2020/21 season.