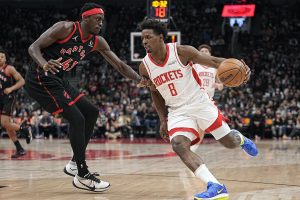 JUNE 30: The Rockets have reached an agreement to re-sign forward Jae’Sean Tate to a three-year contract, agents E.J. Kusnyer and Jordan Cornish tell Shams Charania of The Athletic (Twitter link). Tate’s new deal will be worth $22.1MM.

Houston made the unusual decision to turn down Tate’s minimum-salary team option for 2022/23 this week, despite the fact that he still would have been a restricted free agent a year from now if that option had been exercised.

The move signaled that the Rockets were confident in their ability to lock up Tate to a new multiyear deal — tonight’s news confirms it.

The former Ohio State standout began his professional career overseas in Antwerp in 2018 after going undrafted, then joined the Sydney Kings in 2019 before eventually making his way to Houston in 2020.

While Tate’s three-point shot (31.0%) could use some work, he has showed an impressive ability to score (11.6 PPG on 50.1% shooting), rebound (5.4 RPG), set up teammates (2.8 APG), and defend during his two years with the Rockets and appears to have a place in the club’s plans going forward.