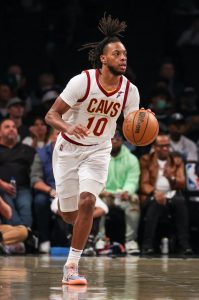 “We’ve quickly seen Darius grow into an NBA All-Star and an integral core piece in our pursuit of sustainable success,” team president Coby Altman said in a statement. “Both on and off the court, Darius has demonstrated a strong commitment to this organization and the community. We look forward to our future and what we can accomplish here in Cleveland.”

JULY 2: The Cavaliers and point guard Darius Garland have reached an agreement on a five-year rookie scale extension that will be the largest deal in franchise history, reports Adrian Wojnarowski of ESPN (Twitter link).

The Cavaliers made serious strides in 2021/22 behind a core of Garland, Evan Mobley, and Jarrett Allen. Mobley’s rookie contract covers three more years, while Allen is under contract for the next four seasons, so the franchise now has that core locked up for the foreseeable future.

Garland’s new contract will go into effect as Kevin Love ($28.94MM) and Caris LeVert ($18.79MM) come off the books in 2023, so the Cavaliers will still have some financial flexibility going forward and aren’t in any immediate danger of becoming a taxpayer.

The exact value of Garland’s extension will depend on where the 2023/24 cap (currently projected at $133MM) lands and whether or not he meets the Rose Rule criteria to increase his starting salary to 30% of the cap.

While Garland is reportedly receiving Rose Rule language in his new deal, it may not be as simple as a spot on the All-NBA Third Team increasing his starting salary to 30% of the cap. Teams and players can negotiate different starting salaries based on what specific criteria the player meets. For instance, Garland may need to make the All-NBA First Team or Second Team in order to get the full 30% — we’ll have to wait for more details.

Even if he doesn’t make an All-NBA team next season, Garland is in line for a starting salary of $33.3MM on his extension, with subsequent 8% raises. He’ll also join the NBA’s list of designated rookies, which we outlined earlier today.

With Garland’s deal done, the Cavaliers figure to shift their focus to a new deal for another guard, Collin Sexton, who is still a restricted free agent.