JULY 12: Brunson’s deal with the Knicks is official, the team announced on Twitter. 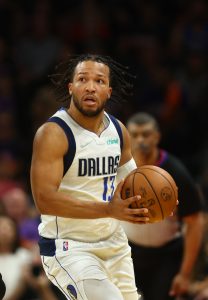 “We are beyond thrilled to add Jalen Brunson to our organization,” said Knicks president Leon Rose. “He’s a competitor, a leader, a play-maker, and most importantly a winner. His addition is a perfect complement to the team that we are building and the culture we are establishing.”

JUNE 30, 8:36am: Brunson has now formally agreed to a four-year, $104MM contract with the Knicks, agents Aaron Mintz and Sam Rose tell ESPN’s Adrian Wojnarowski (Twitter link). The deal will include a fourth-year player option.

JUNE 30, 4:05pm: The Mavericks have been informed that free agent point guard Jalen Brunson intends to sign with the Knicks, a source tells Tim MacMahon of ESPN (Twitter link).

Brunson’s new deal will be worth in the neighborhood of $110MM over four years, according to Shams Charania of The Athletic, who tweets that Dallas didn’t get the opportunity to make a final offer. Marc Stein (Twitter link) hears the contract will be worth about $105MM, plus incentives.

The meeting that Brunson had set with the Mavericks in New York City at the start of free agency is no longer taking place, according to Stein (Twitter link). A report last night suggested that Brunson would meet with the Knicks, Mavericks, and Heat at the start of free agency, but word broke earlier today that the meeting with Miami wasn’t happening either.

Despite his strong performances last season, Brunson isn’t without flaws. He’s only 6’1″ and although he’s strong, he’s not the best athlete, which limits his defensive versatility.

Chris Mannix of Sports Illustrated previously reported that part of the Knicks’ pitch to Brunson is the ability to be the full-time starting point guard. In Dallas, he’s more of a secondary option at the position, with Doncic running the show.

The Mavericks had long projected confidence in their ability to re-sign Brunson, but that confidence had waned considerably over the past week or so. They held his Bird Rights, giving them the ability to offer more years (five) and money than other teams, but reportedly were only willing to go as high as $106MM over five years, which is obviously considerably less annually than the Knicks are offering.

Dallas projects to be far over the salary cap, limiting the team’s ability to secure an adequate replacement for Brunson. However, Stein reports (via Twitter) that the Mavs aren’t expected to immediately pursue a replacement, instead relying on incumbent guards Spencer Dinwiddie and Tim Hardaway Jr. for backcourt depth.

Hardway missed about half the season, including the postseason, but he should be healthy for 2022/23, Stein notes. Dallas eventually plans to go after veteran guard Goran Dragic once the team pursues higher priority targets, including wings and frontcourt players, per Stein.

It’s worth noting that reports two days ago said the Knicks were expected to land Brunson on the terms outlined above, and now his commitment to New York has all but been finalized before free agency officially opens, so it’s possible the Knicks will face a tampering investigation in the future.