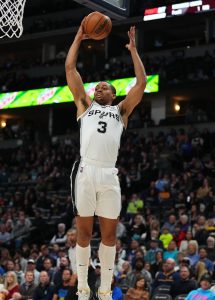 JULY 15: Keldon Johnson is signing a four-year, $80MM extension with the Spurs, according to Shams Charania of The Athletic (Twitter link).

Johnson was the 29th pick of the 2019 draft. As a former first-round pick entering his fourth season, he was eligible for a rookie scale extension, and he has agreed to a lucrative deal to remain with San Antonio.

The young small forward figures to see an increased role during the upcoming season after All-Star Dejounte Murray was traded to the Hawks for first-round picks.

For the sake of comparison, Johnson’s extension is in between what a couple of other small forwards received for their rookie extensions: OG Anunoby got $72MM over four years from the Raptors in 2020 (the last year being a player option), while Mikal Bridges received $90MM over four years from the Suns last summer. Johnson hasn’t been the defender that either of those two were through their third seasons, but he’s been a more productive offensive player — part of that is due to opportunity, but he’s still a talented player with plenty of room for improvement.

Johnson’s extension will kick in during the ’23/24 season. As our extension tracker shows, he is the first player to receive a rookie scale extension that isn’t a maximum-salary deal.