The G League Ignite’s roster is made up of those five veterans and several young prospects, including Jalen Green, Jonathan Kuminga, Isaiah Todd, Daishen Nix, Princepal Singh, and Kai Sotto.

The program’s aim is to provide top prospects with an alternative path to college or international ball during the year before they become draft-eligible. The veteran players are meant to help provide leadership and stability as those prospects prepare for the NBA.

Johnson, 33, is the most notable name among the Ignite’s additions. He has appeared in a total of 870 regular season games since making his debut in 2006, averaging 7.0 PPG and 5.4 RPG in 21.1 minutes per contest for the Pistons, Raptors, Celtics, and Sixers. He didn’t play in the NBA last season after making 51 appearances for Philadelphia in 2018/19.

Hearn, Ashley, and Demps are G League veterans — of the three, only Hearn has played in an NBA regular season game, logging limited minutes in three contests for Detroit during the 2017/18 season.

It remains to be seen exactly what the NBA G League’s 2020/21 season will look like, but the Ignite – led by head coach Brian Shaw – have already begun training in Walnut Creek, California.

JULY 10: The Nets have officially signed Hall as a substitute player, the team announced today in a press release.

Hall, who will turn 23 next month, spent last fall with the Pistons after going undrafted out of Alabama. He was waived by Detroit before the regular season began, but spent most of his rookie year with the Grand Rapids Drive – the Pistons’ G League affiliate – before eventually earning a call-up to the club’s NBA roster.

In 38 games (28.6 MPG) for Grand Rapids, Hall averaged 15.4 PPG, 10.6 RPG, and 1.4 BPG on 66.9% shooting, earning All-NBAGL Second Team honors. He signed a pair of 10-day contracts with the Pistons in February and March, logging limited minutes in four NBA games during that time. His 10-day deal was still active when the NBA went on hiatus on March 11, but didn’t carry over to the summer, making him a free agent.

The Nets have ruled out Spencer Dinwiddie, DeAndre Jordan, Taurean Prince, and Wilson Chandler for the NBA’s restart due to positive coronavirus tests or voluntary opt-outs. As a result, the team is eligible to sign four substitute players. It appears those players will be Michael Beasley (whose deal is already official), Justin Anderson, Jamal Crawford, and Hall.

As Stein tweets – and previously reported – the Nets strongly considered signing Amir Johnson to add frontcourt depth. The club also reportedly had some interest in Lance Thomas. However, having already reached deals with multiple veterans, Brooklyn will opt instead for youth in signing Hall.

Hall’s rest-of-season contract won’t include any form of Bird rights, and he’ll become an unrestricted free agent this fall. Still, if the Nets like what they see this summer, they could try to get him back for the 2020/21 season.

Veteran center Amir Johnson has emerged as a “prime target” for the Nets, according to Marc Stein of The New York Times (Twitter link).

Brooklyn is on the lookout for frontcourt help after losing Nicolas Claxton to a shoulder injury and DeAndre Jordan to a positive COVID-19 test. The team is eligible to sign multiple substitute players due to the fact that Jordan and Spencer Dinwiddie – who also contracted the coronavirus – won’t be participating in the NBA restart.

Although Johnson is unlikely to fill up the box score, he’s a solid defender and screen setter who should be a positive asset in the locker room. He’d likely be an insurance piece off the bench for Brooklyn, though it wouldn’t be a surprise if he sees some minutes, as the team will be down six players. In addition to Claxton, Jordan, and Dinwiddie, the Nets will be missing Kevin Durant (Achilles), Kyrie Irving (shoulder), and Wilson Chandler (opted out).

If the Nets finalize a deal with Johnson, it would be a rest-of-season, minimum-salary contract that would put him on track to reach unrestricted free agency in the fall. Brooklyn wouldn’t hold any form of Bird rights on him at that time.

Whichever player Johnson technically replaces would be ineligible to return in 2019/20.

Klay Thompson would be open to a meeting with the Clippers should the Warriors not present him with a max salary offer at the start of free agency, Adrian Wojnarowski said on the network’s free agency special. Thompson is expected to re-sign in Golden State.

Here’s more from the Western Conference:

6:35pm: The Sixers have fined Johnson for using his cell phone on the sidelines, tweets Shams Charania of The Athletic. “I apologize for having my phone on the bench in today’s game,” Johnson said in a statement tweeted by the team. “I take full responsibility and will accept the consequences of my actions. I also apologize to my teammates, the 76ers organization and the fans for the distraction this has caused.”

5:10pm: Today’s playoff loss to the Nets was punctuated by an embarrassing incident late in the game in which Sixers players Amir Johnson and Joel Embiid were caught looking at Johnson’s cell phone while on the bench. Coach Brett Brown criticized both players for their actions and promised the situation would be handled, tweets Ben Golliver of The Washington Post.

“It’s completely unacceptable and we will deal with it internally, very soon,” Brown said in his post-game press conference. “It’s not something we are and certainly don’t condone.”

Using a cell phone from the bench violates the NBA’s Operations Manual, points out ESPN’s Bobby Marks (Twitter link). Both players are facing substantial fines and possible suspensions. Johnson was inactive today, while Embiid, who has been bothered by knee pain, decided to play shortly before the game began.

Embiid explained that they were using the phone to get an update on the health of Johnson’s daughter (Twitter link). “I looked down because he said his daughter was extremely sick and he was checking on his daughter,” he told reporters.

Here are today’s G League assignments and recalls from around the NBA:

Every week, Hoops Rumors takes a closer look at players who will be free agents or could become free agents next offseason. We examine if their stock is rising or falling due to performance and other factors. This week, we turn our attention to the Atlantic Division:

Marcus Morris, Celtics, 29, PF (Down) – Signed to a four-year, $20MM deal in 2015
Morris will get a nice bump in pay from the team-friendly contract he signed with Phoenix a few years ago. In the last couple of weeks, he’s been in a shooting slump. He’s 7-for-29 from long range over the last six games and has scored 11 or fewer points in five of them. The Celtics don’t rely on Morris for scoring, as evidenced by their five-game winning streak. He’ll eventually perk up offensively and his defensive versatility and rebounding will keep him in the rotation. 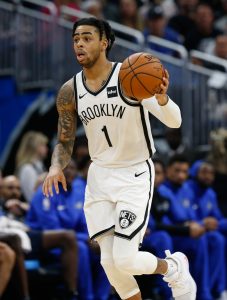 D’Angelo Russell, Nets, 22, PG (Up) – Signed to a four-year, $23MM deal in 2015
Has any free agent increased his value as much as Russell in recent weeks? If so, it’s an awfully close call. Russell has blown up this month, averaging 24.1 PPG and 7.7 APG for the surging Nets. In the past two weeks alone, Russell hung up 34 points and seven assists against Boston and 40 points and seven assists against Orlando. He added a 25-point, 10-assist performance against the Magic on Wednesday. Russell will be a restricted free agent and the Nets now have to consider using a chunk of their cap space to re-sign him. It will intriguing to see if any team calls the Nets’ bluff with an offer sheet.

Enes Kanter, Knicks, 26, C (Down) – Signed to a four-year, $70MM deal in 2015
Kanter is still in his prime but he’s been swept into the undertow of New York’s youth movement. Kanter didn’t leave the bench on Wednesday and is now pining for a trade. With the hope of landing a big fish in the free agent pond, the Knicks had no intention of re-signing Kanter. But his diminished role isn’t exactly enhancing his value during his walk year. Kanter puts up solid numbers in the points and rebounds columns but his defensive shortcomings and lack of shotblocking prowess will depress his market.

Kawhi Leonard, Raptors, 27, SF (Up) — Signed to a five-year, $94.3MM deal in 2015
The Raptors essentially gave Leonard a week’s vacation by sitting him out for four consecutive games. They’re treating him with kid gloves with the hope he’ll take off the gloves in the summer and sign the dotted line with them. When he has played, he’s been dynamite. He’s averaging career highs in points (27.6 PPG) and rebounds (7.9), alleviating concerns that the quad injury that limited him to nine games last season would be a long-term issue. The Raptors have played quite well without Leonard but there’s no doubt that their hopes of reaching the NBA Finals rest on Leonard’s shoulders.

Amir Johnson, Sixers, 31 (Down)– Signed to a one-year, $2.39MM deal in 2018
Johnson has carved out a nice career after getting drafted in the second round by Detroit in 2005. His playing time has gradually diminished over the last six seasons and he’s down to 9.3 MPG for Philadelphia this season. Johnson has never been a prolific rebounder but he can help at the defensive end. Lately, he’s dealt with some migraines. If Johnson wants to continue his career going forward, he’ll be looking at a veteran’s minimum contract once again.

JULY 4, 2:50pm: Johnson’s new one-year deal will be worth the veteran’s minimum, according to Jake Fischer of SI.com (Twitter link). 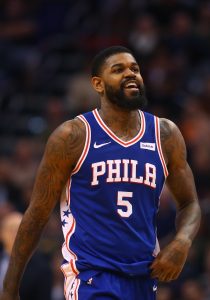 2:29pm: The Sixers are finalizing a contract agreement with free agent big man Amir Johnson that will keep him in Philadelphia, reports ESPN’s Adrian Wojnarowski (via Twitter). According to Wojnarowski, Johnson is expected to sign a one-year deal.

The Sixers have committed just about all their projected cap room to Redick and trade acquisition Wilson Chandler, but could offer Johnson the $4.45MM room exception or a minimum-salary contract if they don’t intend to clear additional space with another roster move.

In 74 games for Philadelphia in 2017/18, Johnson provided veteran stability in the frontcourt, primarily serving as Joel Embiid‘s backup at the five. He averaged 4.6 PPG, 4.5 RPG, and 1.6 APG in 15.8 minutes per contest.

The 76ers entered the offseason with 11 players under contract, and have since drafted and signed Zhaire Smith and Landry Shamet, agreed to re-sign Redick, struck a deal to acquire Chandler, and now agreed to terms with Johnson as well.

That brings Philadelphia’s projected roster count to 16, without accounting for the possibility that the team could bring over draft-and-stash prospect Jonah Bolden this offseason. As such, a trade or cut figures to be coming at some point, with Jerryd Bayless and Timothe Luwawu-Cabarrot among the players whose roster spots look least secure.

Their agreement with Johnson also seems likely to take the Sixers out of the running for veteran center Kyle O’Quinn, who was reportedly drawing “heavy interest” from Philadelphia on the first day of free agency.

The Sixers are interested in veteran free agent guard Jamal Crawford, Keith Pompey of the Philadelphia Inquirer reports. Crawford could fortify a bench that has lost Ersan Ilyasovaand Marco Belinelli since the start of free agency. Crawford, 38, averaged 10.3 PPG in 20.7 MPG for the Timberwolves last season. The Pelicans, Cavaliers, Warriors and Nuggets are also reportedly in the mix for Crawford, who opted out of his contract with Minnesota and left $4.54MM on the table.

In other news regarding the free agent market: