Free agent guard Damyean Dotson has signed overseas in Turkey with Gaziantep Basketbol, the team announced on Saturday. This marks the first overseas stint in Dotson’s professional career, which began when he was drafted No. 44 overall by the Knicks in 2017.

Dotson stayed with New York for three years, then spent time with the Cavaliers during the 2020/21 season. He joined the Spurs for training camp last fall and spent most of the season in the G League. The Knicks also signed him to two 10-day hardship contracts in December.

After their initial 10-day hardship contracts expired overnight, Damyean Dotson and Matt Mooney have each signed a second 10-day deal with the Knicks, according to NBA.com’s official transactions log.

Neither Dotson nor Mooney played much during their first 10 days with New York. Dotson got into two games and logged 21 total minutes, while Mooney only made a brief cameo on Christmas Day. However, the two shooting guards provided the Knicks with some depth while they dealt with a minor COVID-19 outbreak.

New York still has four players in the health and safety protocols and Danuel House is the only other player currently on a 10-day deal with the team, so Dotson and Mooney will stick around a little longer.

Dotson will earn $102,831 over the course of his 10-day contract, while Mooney will make $85,578. Neither figure will count toward team salary for cap or tax purposes.

DECEMBER 21: Dotson’s 10-day deal is now official, the Knicks announced in a press release. It will run through December 30.

DECEMBER 20: The Knicks will use the hardship exception to sign veteran wing Damyean Dotson to a 10-day contract, agent Chris Gaston tells Shams Charania of The Athletic (Twitter link).

The Cavaliers signed Dotson to a two-year contract during the 2020 offseason, but the second year of that deal was non-guaranteed, so Cleveland waived him this fall after he appeared in 46 games for the club in 2020/21. Most recently, Dotson has been playing for San Antonio’s G League affiliate, recording 12.9 PPG, 5.6 RPG, and 3.9 APG in 12 games (34.9 MPG) for the Austin Spurs this season.

The Knicks, who have six players in the health and safety protocols, added Tyler Hall using a hardship exception on Sunday. At least one more signing could be forthcoming for New York before Tuesday’s game vs. Detroit.

OCTOBER 14: Dotson and Burns have been waived, Keith Smith of Spotrac tweets. Both will likely wind up with the Austin Spurs once they clear waivers.

OCTOBER 13: Free agent guard Damyean Dotson is signing an Exhibit 10 contract with the Spurs, tweets JD Shaw of Hoops Rumors. The team is listing Dotson as a roster member on its website, so the deal appears to be official.

Dotson, 27, played 46 games for the Cavaliers last season, averaging 6.7 points and 2.0 assists per night. He had a non-guaranteed contract for the upcoming season, but Cleveland waived him last month. Dotson was a second-round pick by the Knicks in 2017 and spent his first three NBA seasons in New York.

Like Dotson, rookie guard Jordan Burns is listed as a member of the Spurs’ roster on the team’s official website, so it appears his reported deal is done as well. The two signings give San Antonio 19 players under contract.

The Cavaliers have waived guard Damyean Dotson, Kelsey Russo of The Athletic tweets.

Dotson had a non-guaranteed $2MM salary. The four-year NBA veteran averaged 6.7 PPG, 2.0 RPG and 2.0 APG in 19.7 MPG last season for Cleveland. He saw action in 46 games, including seven starts.

Dotson spent his first three seasons with the Knicks. He has averaged 7.5 PPG and made 34.6% of his 3-point shots during his career.

The Cavs are adding guard Kevin Pangos who has been playing overseas since attending Gonzaga, on a contract with a first-year guarantee. That put Dotson’s roster spot in jeopardy.

By trimming Dotson’s salary, Cleveland will give itself more breathing room under the tax line, John Hollinger of The Athletic tweets.

Doc Rivers has talked to Ben Simmons about the trade rumors surrounding the point guard but the Sixers coach wouldn’t reveal any details, Rich Hofmann of The Athletic tweets. Simmons has been mentioned prominently as the centerpiece of any package for the Rockets’ disgruntled star, James Harden, if Philadelphia pursues that avenue. “I can tell you that none of this started from us,” Rivers said. “I gave Ben a call (Thursday) night but I’m not going to share what we said. It’s unfortunate, but it’s part of the business.”

The Kings will have to make a decision on Bogdan Bogdanovic‘s offer sheet with the Hawks on Tuesday, and as Jason Anderson of The Sacramento Bee writes, there are pros and cons the team must consider as it weighs its options.

Matching Bogdanovic’s four-year, $72MM offer sheet would mean not losing him for nothing, and the contract doesn’t look particularly onerous — it’s unlikely that it will become an albatross within the next year. Bogdanovic would have veto power on any trade for the next year if Sacramento matches his offer, and the deal includes a 15% trade kicker, but there’s a good chance the club could eventually move him for positive value.

Still, while the Kings had originally budgeted for a $15-18MM annual salary for Bogdanovic under former GM Vlade Divac, per Anderson, the financial impact of the coronavirus pandemic and the salary cap coming in $6MM lower than anticipated may make the team nervous about a long-term deal at the upper end of that range.

Additionally, sources have suggested to Anderson that Bogdanovic would prefer a change of scenery and that the swingman feels he has been “de-prioritized” by the Kings. Sacramento already may have to deal with one disgruntled wing in Buddy Hield — carrying two of them, and having them eat into each other’s minutes, may not be an ideal situation for the club.

Here are a few more notes and rumors related to free agency:

NOVEMBER 25: Dotson’s new deal with the Cavaliers has been completed, according to the NBA’s official transactions log. The second year of the contract is non-guaranteed, Chris Fedor of the Cleveland Plain Dealer tweets. 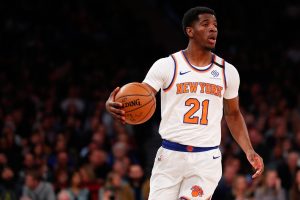 Wojnarowski says the deal will be worth $4MM. Two years at the minimum for Dotson would be worth $3.5MM, so this is either a minimum-salary agreement that has been rounded up or the Cavs will use a small portion of one of their exceptions to complete the deal.

Dotson will provide a little more depth on the wing for the Cavs, who agreed to acquire JaVale McGee on Sunday in an effort to bolster their frontcourt.

12:40pm: The Knicks have confirmed all the roster moves detailed below and added that they’ve turned down their team option on Theo Pinson, whom they claimed off waivers in June. Pinson’s option had been worth $1.7MM, but he’ll become an unrestricted free agent instead of remaining with New York.

The team projects to enter free agency with upwards of $38-40MM in cap room.

12:06pm: The Knicks will waive Elfrid Payton and Kenny Wooten and have decided not to pick up Bobby Portis‘ option for next season, tweets Steve Popper of Newsday. In addition, the team won’t make a qualifying offer to Damyean Dotson, who becomes an unrestricted free agent.

The decisions are designed to create cap flexibility, Popper adds (Twitter link). He notes that the team could opt to re-sign some of the players, but at lesser salaries than what they were scheduled to make (Twitter link).

The Jazz, Bucks, and Warriors are among the teams expected to show interest in Damyean Dotson when he becomes a free agent this offseason, sources tell Marc Berman of The New York Post.

Dotson, who will turn 26 in May, has spent his first three NBA seasons with the Knicks, appearing in 165 games and averaging 7.8 PPG on .419/.361/.721 shooting in 20.1 minutes per contest. Because he only has three years of experience, he can be made a restricted free agent at season’s end if the Knicks give him a qualifying offer worth just over $2MM.

However, as Berman notes, it’s unclear whether New York will make an effort to re-sign Dotson to a new deal. The new management group isn’t the one that drafted him, and he had fallen out of the rotation prior to the NBA’s hiatus, appearing in just one of the Knicks’ last nine games.

“That seemed (to be) the writing on the wall,” one NBA scout told Berman. “You’d think they’d be still trying to develop him.”

Former Knicks head coach David Fizdale, who lauded Dotson’s “work ethic, leadership qualities, and toughness,” also praised the youngster’s willingness to be coached and expressed to Berman that the 6’5″ wing has a promising NBA future.

“He’s a game shooter and improved his handle and as a finisher,” Fizdale said. “He’s a good rebounding guard, but he still has to improve defensive awareness on the weak side. Overall he’s a solid NBA player.”