We have more overseas news:

Former NBA guard Milos Teodosic has reached a contract extension agreement with Virtus Bologna through the 2022/23 season, according to a team press release. Teodosic played 60 games with the Clippers from 2017-19. He was waived in February of his final season and signed with the Italian club during the summer of 2019.

DECEMBER 2: Free agent forward Dante Cunningham is working on a deal with a team in China, sources tell Jon Krawczynski of The Athletic (Twitter link). It’s unclear which club in the Chinese Basketball Association is pursuing Cunningham.

Cunningham, 32, has spent the last decade in the NBA since being selected 33rd overall in the 2009 draft by Portland. The former Villanova standout has bounced around the league since then, suiting up for a total of seven teams and logging 715 regular season games, plus another 21 playoff contests.

Although he has played both forward spots, Cunningham is seemingly best utilized as a stretch four, having added a three-point shot to his game in recent years. In his last three NBA seasons, he knocked down 38.4% of his outside attempts.

While Cunningham was briefly linked to the Nets in September, there otherwise hasn’t been much chatter surrounding him since his contract with the Spurs expired in the spring. If he does end up playing in the CBA, the season will end before the NBA’s does, giving him the opportunity to potentially return stateside down the stretch if he looks good overseas.

Despite the fact that multiple Nets players are reportedly pushing for the team to sign Carmelo Anthony, Brooklyn appears very unlikely to do so at this point, league sources tell Shams Charania of The Athletic.

According to Charania, the Nets are more likely to fill their 20-man offseason roster they’ve worked out in recent weeks, including perhaps veteran forward Lance Thomas and swingman C.J. Williams. Dante Cunningham and Luol Deng are among the other free agents who have emerged as viable targets for Brooklyn, Charania adds.

With Wilson Chandler facing a 25-game suspension, the Nets could theoretically move on from the former Nugget to open up a spot on their 15-man regular season roster, but they currently have no plans to do so. As Charania points out, keeping Chandler on the suspended list during his 25-game ban will allow the franchise to recoup some of his salary. Plus, team executives believe Chandler would be quickly scooped up by another team if he were released later in the season.

Here are a few more items of interest from Charania’s latest round-up:

Maxi Kleber, 27, Mavericks, PF (Up) – Signed to a two-year, $2.19MM deal in 2017
Kleber has received increased playing time since the blockbuster Kristaps Porzingis deal with the Knicks. He’s averaging 10.2 PPG and 4.8 RPG in 25.7 MPG as a starter this month while making 36% of his 3-point attempts. Kleber would be a restricted free agent if Dallas extends a $1.82MM qualifying offer. With loads of cap space to spare, the Mavs have plenty of incentive to make that modest offer for a rotation player, even though he’d probably move back to the bench next season when Porzingis is ready to play again. 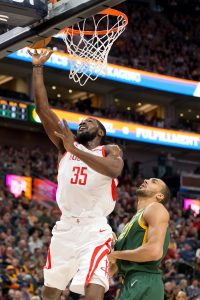 Kenneth Faried, Rockets, 29, PF (Up) – Signed to a one-year, $917K deal in 2019
Clint Capela‘s return from a thumb injury this week will reduce the Manimal’s minutes. He’ll still play a valuable role for Houston, where he has revived his career after getting bought out by Brooklyn. After appearing in just 12 games with the Nets, Faried has averaged 15.7 PPG, 9.9 RPG and 1.0 BPG in 13 outings with the Rockets. It seems Faried has been in the league a long time, but he’s still just 29. In an era of stretch fours and fives, it’s questionable whether anyone views Faried as a starter going forward. He should still get a multi-year deal somewhere as a second-unit difference maker.

Justin Holiday, Grizzlies, 29, SF (Down) – Signed to a two-year, $9MM deal in 2017
Holiday was acquired from the Bulls when the Grizzlies still harbored hopes of making the playoffs. He didn’t move the needle at all before Memphis went into sell mode prior to the trade deadline. He’s averaged 8.2 PPG on 34.8% shooting (29.8% on 3-point tries) in 28.5 MPG with the Grizzlies. Holiday has posted below average PERs throughout his career, which doesn’t help his cause in the analytics era. Holiday has enough of a resume to land on someone’s bench next season but his days as a starter are likely over after this season.

Elfrid Payton, Pelicans, 25, PG (Down) — Signed to a one-year, $3MM deal in 2018
Payton inked a short-term, ‘show me’ contract after the former lottery pick flopped in Orlando and Phoenix. He was given the opportunity to replace free agent Rajon Rondo in the lineup but has spent a majority of the season in the trainer’s room. He’s appeared in just 19 games, with a right ankle sprain sidelining him for the last nine games heading into Friday’s action. The Pelicans lost six of the last eight games that he played. Payton will probably have to settle for another one-year deal this summer, this time in a backup role.

Dante Cunningham, Spurs, 31, SF (Down)– Signed to a one-year, $2.49MM deal in 2018
Cunningham has seen spot duty with the Spurs, averaging 15.9 MPG in 53 appearances. He’s managed to stay in the league for a decade, though he’s usually the No. 5 option at the offensive end. He accepts his limited role and provides some defense, so it’s possible he’ll squeeze out another veteran’s minimum deal with San Antonio or another playoff contender. But being on the wrong side of 30 means he’ll probably have to wait until late in the free agency period for an offer.

Spurs first-round pick Lonnie Walker IV will undergo surgery on Monday to repair a right medial meniscus tear, Shams Charania of The Athletic tweets. The injury was suffered during the fourth quarter of San Antonio’s preseason victory over the Pistons on Friday.

The early timeframe for Walker’s recovery is 6-to-8 weeks, Adrian Wojnarowski of ESPN tweets. Walker was expected to play a key bench role at small forward behind Rudy Gay. His injury, at least in the short run, opens up playing time for veterans  Dante Cunningham and Quincy Pondexter.

Walker was the 18th overall pick in the draft.

A Spurs legend is helping Lonnie Walker navigate his first NBA training camp, writes Jabari Young of The Athletic. Tim Duncan has served as a mentor to the rookie guard, helping him refine his game to get ready for the start of the season.

“It’s a little surreal,” Walker said. “But that’s probably one of the best things about being a rookie, especially being drafted by the Spurs. You have players who are [the] previous greatest of all-time, such as him and Manu [Ginobili], and they treat you like family.”

Walker admits to being awe-struck the first time he met Duncan, but their relationship has become much more comfortable. Duncan is seen as a teacher who happy to pass along advice to any Spurs player, and he has become a surrogate to coach Gregg Popovich.

“It’s nothing unusual for us to see,” long-time Spur Patty Mills said. “[It’s] that same characteristic that Manu has of being able to help younger guys for the better of the team. Just because he’s retired doesn’t mean that that trait can’t keep going.”

JULY 20: The Spurs have officially signed Cunningham, the team announced today in a press release. 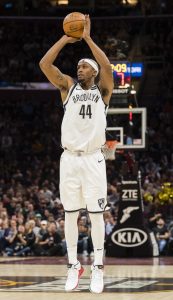 Free agent forward Dante Cunningham has agreed to terms on a deal with the Spurs, reports ESPN’s Adrian Wojnarowski (via Twitter). According to Shams Charania of Yahoo Sports (Twitter link), Cunningham will sign a one-year contract with San Antonio.

After making just two 3-point shots in his first six NBA seasons, Cunningham has shown an increased willingness to fire away from beyond the arc in recent years. Over the last three seasons, he has knocked down 184 threes at a 35.2% rate, solid numbers for a player who sees most of his action at power forward. He’ll likely be expected to continue stretching the floor in San Antonio.

Cunningham won’t be in line for a big payday with the Spurs. His one-year deal is expected to be worth $2.5MM, says Jabari Young of The San Antonio Express-News (Twitter link).

That would exceed Cunningham’s minimum salary, so the Spurs may be using a portion of their mid-level exception to complete the signing. San Antonio used approximately $6MM of the $8.641MM MLE to sign Marco Belinelli.

Having added Cunningham, Belinelli, and Lonnie Walker while re-signing Rudy Gay, Davis Bertans, and Bryn Forbes, the Spurs now have 14 players on NBA contracts for the 2018/19 season.

Wizards Express Interest In Crawford, Mbah A Moute, Others

The Wizards lost one key member of their bench when Mike Scott reached an agreement with the Clippers on Monday, but the team has remained active in search of potential free agent additions.

According to Candace Buckner of The Washington Post (Twitter links), the Wizards have expressed interest in a number of veteran free agents, including Jamal Crawford, Luc Mbah a Moute, Dante Cunningham, and Willie Reed. Ty Lawson, who finished last season in D.C., also remains a possibility to return, Buckner adds.

The Wizards’ backcourt is getting pretty crowded, with Tomas Satoransky and newly-acquired Austin Rivers slotting in behind John Wall and Bradley Beal. Jodie Meeks and rookie Troy Brown could also see some time at the two, so it’s not clear whether Crawford, who will want a featured role off the bench, would be a good fit in Washington.

However, Mbah a Moute, Cunningham, and Reed make more sense as potential targets for the Wizards. Mbah a Moute and Cunningham are versatile forwards capable of knocking down three-pointers, while Reed is a big man who could add depth to a Wizards frontcourt that no longer features Marcin Gortat.

The Wizards have also been linked to Dwight Howard, Jeff Green, Treveon Graham, and Thomas Robinson, among other free agents.

4:06pm: Wolfson adds Jeff Green, Malcolm Delaney, and Treveon Graham to the list of free agents that the Timberwolves have inquired on so far (Twitter link).

12:15pm: The Timberwolves have interest in Nick Young among several other free agents, according to ESPN’s Darren Wolfson (Twitter link).

Young is coming off a down year in Golden State where he sported just a 10.0 player efficiency rating and scored just 7.3 points per game. It’s hard to envision the shooting guard surpassing the $5.19MM salary he received with the Warriors last season after floundering alongside the best supporting cast he’s ever played with.

Minnesota has the non-tax mid-level ($8.6MM) and the bi-annual ($3.4MM) at its disposal. However, with approximately $115MM already on the books, the team must be careful when handing out deals if it intends to stay below the luxury tax line. If a team uses its bi-annual exception or more than the taxpayer portion of its MLE, it becomes hard-capped for the season.

Dante Cunningham and James Ennis are among other free agents the Wolves are keeping an eye on, Wolfson adds. Lance Stephenson remains a possibility for one of the team’s five open roster spots. Minnesota is among the teams expected to have interest in the mercurial shooting guard once the first wave of free agents sign.