The Nets have re-signed guard David Duke Jr. to a two-way contract, according to a team press release.

The signing came as no surprise, as a report surfaced late last month that Duke was likely to return on a two-way deal. Former Wake Forest guard Alondes Williams holds the other two-way slot. Duke will earn about $502K (half the rookie minimum) on the deal, and could eventually have it converted into a standard contract if he’s productive.

The Nets tendered a two-way contract offer to Duke earlier this summer. Duke had initially passed on the proposal and was reportedly eyeing a spot on Brooklyn’s 15-man roster but eventually settled for another two-way deal.

Prior to joining the Nets, Duke went undrafted in 2021 after playing three seasons at Providence College. 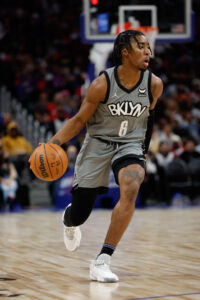 The Nets tendered a two-way contract offer to Duke earlier this summer. Duke had initially passed on the proposal and was reportedly eyeing a spot on Brooklyn’s 15-man standard roster, but it sounds like he’s prepared to accept the two-way offer.

Duke would be Brooklyn’s second two-way player, joining former Wake Forest guard Alondes Williams. As Milholen notes, the 6’5″ guard will earn about $502K (half the rookie minimum) on the deal, and could have his two-way deal converted into a standard contract later on in the season.

Duke’s return to the fold would bring the total sum of Nets players to 15 ahead of training camp. The team has 12 players inked to fully guaranteed deals, along with the partially-guaranteed contract of Edmond Sumner and the aforementioned duo of two-way players.

Brooklyn can still sign up to five players to its 20-man offseason roster and is reportedly considering some veteran big men for bench depth.

The Celtics have a recent history of reaching extensions with their first-round picks, and Grant Williams hopes to be next, writes Jared Weiss of The Athletic. Weiss reports that Boston has already started extension talks with Williams, who displayed his value during the team’s run to the NBA Finals. He provides a strong defensive presence off the bench and shot 39.3% from three-point range during this year’s playoffs.

Williams talks about wanting to play his entire career for the Celtics and help the organization add more banners to the rafters. Weiss notes that negotiations might be tricky in light of recent deals for similar players, but Williams expressed confidence that management will be fair with him.

“Just making sure that the extension works for both sides. My number one focus is winning,” Williams said. “You take care of the good guys. You take care of the guys that provide value to your team, both on and off the floor. I feel like the Celtics are feeling the same way. I’m not too stressed about the negotiations because I feel like both parties want to get a deal done.”

Simmons missed the entire 2021/22 season due to mental health issues and a back injury that required surgery. Sources tell Lewis, who notes that Simmons is on track to rejoin Brooklyn in time for the team’s training camp this fall, that the former No. 1 overall pick has little trade value at present. The three-time All-Star, still just 25, holds career averages of 15.9 PPG, 8.1 RPG, and 7.7 APG.

There’s more out of Brooklyn:

With free agency still two days away, rumors about P.J. Tucker landing in Philadelphia continue to percolate. After Marc Stein reported earlier in the week that multiple executives believe the Sixers will sign Tucker to a three-year, $30MM contract, Keith Pompey of The Philadelphia Inquirer conveys a similar sentiment today.

According to Pompey, three sources believe Tucker to the 76ers is a “done deal,” while a fourth source said he’d be shocked if the veteran forward doesn’t end up in Philadelphia. Sources tell Pompey that Tucker’s three-year deal with the Sixers, assuming it materializes, could be worth $27MM with incentives that increase the value to $30MM.

The Sixers still need to do some cap work in order to realistically make that kind of offer to Tucker. If James Harden turns down his $47MM+ player option and agrees to a lesser first-year salary on a new contract, the team could create the cap flexibility necessary to use its full mid-level exception on Tucker. But Harden is expected to opt in and then sign an extension, which means Philadelphia would have to shed some salary. Furkan Korkmaz ($5MM), Matisse Thybulle ($4.4MM), and Georges Niang ($3.5MM) are among the club’s potential trade candidates.

The Suns have issued a qualifying offer to center Deandre Ayton, making him a restricted free agent, reports Keith Smith of Spotrac (Twitter link). Ayton’s qualifying offer is worth $16,422,835.

Although there have been consistent whispers about the possibility of Ayton leaving Phoenix in free agency this summer, there was never any doubt that he’d receive a qualifying offer. That QO ensures that he doesn’t become an unrestricted free agent and gives the Suns the opportunity to match any offer sheet he signs with a rival team. Ayton also has the option of signing the one-year, $16.4MM deal if he wants to become an unrestricted free agent in 2023, though that’s considered very unlikely.

Today marks the one-year anniversary of the trade that brought James Harden to Brooklyn and gave the Nets an imposing Big Three of Harden, Kevin Durant, and Kyrie Irving. That trio hasn’t been on the court together very often, but on Wednesday they provided a reminder of how dominant they can be, writes Brian Lewis of The New York Post.

With all three players in the lineup for only the second time this season, Brooklyn broke open a close game in the third quarter and smashed the East-leading Bulls by 26 points. Harden scored 25 points and handed out 16 assists, while Durant put up 27 points and nine assists. Irving, playing his third game of the season, had just nine points but created plenty of scoring opportunities for his teammates.

“Since I’ve been here it’s been crazy, lots of ups and downs,” Harden said. “Nah. Like, we’re that good. We just haven’t had enough of it. Last we had 15 games maybe together, and this year only two. We haven’t had a real season to where y’all can consistently see how great we can be. And we’re working on that. We need to get to that point.”

It has been an unusual week for Suns guard Elfrid Payton, who entered the health and safety protocols on Sunday, then exited them on Monday after what appeared to be a false positive. On Wednesday, prior to Phoenix’s game vs. Oklahoma City, Payton reentered the protocols, as Duane Rankin of The Arizona Republic writes.

The specifics of Payton’s situation are unclear, but he’ll now remain in the protocols for at least six days unless he can once again return two consecutive negative COVID-19 tests at least 24 hours apart.

According to Rankin, Payton wasn’t the only Sun to be placed in the protocols on Wednesday — Abdel Nader has also joined that list. However, Nader has been out of Phoenix’s lineup since November 19 due to what the team has called “right knee injury management,” so his placement in the protocols had no real impact on the rotation.

Here are a few more COVID-related updates from around the NBA:

The Nets announced some good news and some bad news on Thursday morning. Three players – James Harden, Paul Millsap, and Jevon Carter – have exited the health and safety protocols, but three others – rookies Cameron Thomas, David Duke, and Kessler Edwards – have entered the protocols, tweets Adam Zagoria of Forbes.

You could make a strong case that no team has been hit harder in the last couple weeks by COVID-19 than Brooklyn, which still has 10 players in the league’s protocols after today’s updates. Of the 17 players the team had been carrying on its standard roster, 13 have been in the protocols this month, while Joe Harris (ankle) and Nicolas Claxton (wrist) have dealt with injuries.

Patty Mills and Blake Griffin have been the only players unaffected, and even Griffin is playing through knee pain. The Nets have also signed four replacement players – Langston Galloway, James Ennis, Shaquille Harrison, and Wenyen Gabriel – via hardship exceptions to help fill out the roster.

Brooklyn’s game in Portland on Thursday has been postponed, but the NBA will certainly want to avoid having the team’s Christmas Day game vs. the Lakers endure a similar fate. Head coach Steve Nash said today that Harris won’t play on the Nets’ current road trip, but the team hopes to have Claxton return on either Saturday vs. the Lakers or Monday vs. the Clippers (Twitter link via Brain Lewis of The New York Post).

If Harden, Millsap, and Carter are all cleared to return and Mills, Griffin, and the four replacement players are good to go, Brooklyn would have at least nine players available, even without Claxton. The Nets remain eligible to complete more hardship signings before Saturday too, if they so choose.

The Knicks will be looking to pick up a win in Milwaukee on Friday night, but Julius Randle views the Bucks as a success story worth emulating, as Fred Katz of The Athletic details. Milwaukee won a title in Giannis Antetokounmpo‘s eighth season, having patiently built a championship-caliber roster around its star player without making any major splashes on the free agent market.

“It was beautiful to watch simply because the aspect of, they built it from the ground up,” Randle said. “They didn’t put a super team together or whatever it was. These guys were in the mud every day grinding the thing out. They took some lumps along the way there trying to figure it out.”

While the Knicks lack a bona fide superstar on the level of Antetokounmpo, Randle likes the idea of building the roster “organically” and believes that it an eventual breakthrough would be more rewarding.

“(The Bucks) did something that’s very unique, especially in today’s league, as far as building something like that and not putting a bunch of players together,” he said. “They really built it.”