Here are the latest developments on players entering or exiting the league’s health and safety protocols:

LaVine, Dosunmu, Johnson, and Thomas were all placed in the COVID-19 protocols at least 10 days ago. Dotson just entered the protocols on Tuesday, but has since tested out of them, according to Donovan (Twitter link via Johnson). That suggests that perhaps Dotson registered a false positive test earlier in the week.

It’s great news for the Bulls, who were one of the first teams to be affected by a coronavirus outbreak this month and who have had three games postponed. They’ll resume play on Sunday when they host Indiana.

While those contracts remain active for now, once all the Bulls players coming out of the protocols have been medically cleared to return to action, the team won’t be able to continue carrying those hardship signees, notes ESPN’s Bobby Marks (Twitter link). That means Ilyasova and McClung likely won’t get to play out their full 10-day contracts, and if Chicago wants to keep McKinnie around, the team would have to create room by trading or waiving someone from the 15-man roster.

DECEMBER 22: The contract is official, according to NBA.com’s transactions page.

DECEMBER 21: The Bulls have agreed to sign free agent forward Ersan Ilyasova to a 10-day contract using a hardship exception, according to ESPN’s Adrian Wojnarowski and Ramona Shelburne (Twitter link).

The shorthanded Bulls, who currently have six players in the health and safety protocols, have already added Alfonzo McKinnie as a replacement player and will reportedly sign Mac McClung as well. The hardship signings won’t count toward the team’s 15-man roster limit, so no corresponding moves are necessary.

Ilyasova, 34, has an extensive NBA résumé, having appeared in 825 regular season games and another 52 playoff contests since making his debut in 2006. However, he didn’t sign until March last season and played a limited role down the stretch for the Jazz, averaging just 3.8 PPG and 1.7 RPG in 17 games (8.7 MPG).

The former second-round pick out of Turkey is known as a stretch four, having made 36.7% of his career attempts from beyond the arc.

Ilyasova will earn $151,821 over the course of his 10-day contract, but it won’t count against the Bulls’ team salary for cap or tax purposes.

Four qualifying tournaments to determine the final four teams in the men’s basketball pool at the Tokyo Olympics are set to tip off on Tuesday. In advance of the Olympic qualifiers, the 24 teams involved have officially set their 12-man rosters, according to a press release from FIBA.

More than two dozen current NBA players are participating in the tournament, and 11 of the 24 teams competing for Olympic spots have at least one current NBA players on their respective rosters. Of those clubs, Team Canada has the biggest contingent of NBA players — eight of the 12 players on Nick Nurse‘s squad finished the season on an NBA roster. Turkey is next with four NBA players.

The four qualifying tournaments will take place in Serbia, Lithuania, Croatia, and Canada. Only the winner of each six-team group will advance to Tokyo. Those four winners will join Japan, Nigeria, Argentina, Iran, France, Spain, Australia, and the U.S. in the 12-team Olympic tournament.

The teams that move onto the Olympics may tweak their rosters for Tokyo, depending on the availability of certain players. For instance, if Greece were to win its qualifying tournament, perhaps Bucks star Giannis Antetokounmpo – who remains active in the playoffs for now – would make an effort to join the team in Tokyo next month.

Here are the NBA players on the OQT rosters:

To view the full rosters, be sure to visit FIBA’s official site and click through to each team from there.

Veteran center Pau Gasol, who has represented Spain in four Olympic tournaments so far, remains on track to be part of the team in Tokyo, per an Associated Press report. Gasol was one of 18 players included on Spain’s preliminary roster for the Tokyo games, joining his brother – Lakers center Marc Gasol – and Timberwolves point guard Ricky Rubio.

Timberwolves forward Juan Hernangomez, Pelicans big man Willy Hernangomez, and projected first-round pick Usman Garuba are among the other notable names on Spain’s preliminary roster, according to The Associated Press.

Here’s more on the Tokyo Olympics:

Mike Conley was a beloved figure during the 12 years he spent with the Grizzlies, so it’s going to be odd to face his old team in a playoff series, writes Mark Giannotto of The Memphis Commercial Appeal. Conley will square off with 21-year-old point guard Ja Morant, who was drafted to replace him after he was traded to the Jazz in 2019.

“I know how great the fans are there when they’re rooting for you, but I don’t know what it’s like when they’re against you,” Conley said. “I’m looking forward to that. It’s a new chapter for me and it’ll be fun to compete in the city that was home for me for so long against the team that’s playing so well.”

Conley had one of his best seasons at age 33 and is coming off his first All-Star appearance. He had a difficult adjustment to Utah last season, but posted numbers this year that are typical of what he used to do in Memphis: 16.2 points, 3.5 rebounds and 6.0 assists per game while shooting 44% from the field and 41% from three-point range.

“I felt really comfortable in my role this year, how I’m used and how I can be effective for our team,” Conley said. “I think the bubble kind of helped expedite that and now with everybody healthy … everybody has really bought into their roles so much that we feel really comfortable and confident with what we have, and we feel like we can go to bat with anybody.”

Ersan Ilyasova, who signed with the Jazz earlier this week, won’t get rushed into action, according to Sarah Todd of The Deseret News. Ilyasova bided his time in free agency, waiting for an opportunity this season, until Utah came calling.

“I think he’s anxious to contribute in any way that he can,” coach Quin Snyder said. “We don’t expect him to show up and be ready to go right away. That’s not to say that he won’t be in many senses, but there’s an adjustment period, and we’re patient with him. I want him to be patient with himself.”

Ilyasova jumped at the chance to join the team with the league’s best record, as a story posted on the team’s website notes. The veteran forward played for the Bucks the past two seasons.

MARCH 10: The Jazz have officially signed Ilyasova, according to NBA.com’s transactions log. 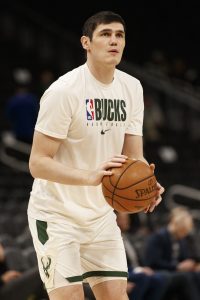 MARCH 9: Free agent power forward Ersan Ilyasova has agreed to a sign a rest-of-season, minimum-salary contract with the Jazz, sources tell Jordan Schultz of ESPN (Twitter link). According to Schultz, Ilyasova is expected to officially sign on Wednesday after completing the COVID-19 protocol.

Last season’s 36.5% mark from three-point range matches Ilyasova’s career rate, and his ability to stretch the floor from the power forward spot has been valuable over the years. While he’s not the most switchable or versatile defender, the 33-year-old has shown an uncanny knack over the years for taking charges on the defensive end.

Utah has had plenty of success this season with a forward rotation that includes Bojan Bogdanovic, Joe Ingles, Royce O’Neale, and Georges Niang, so it’s unclear if Ilyasova will see action outside of garbage time or if he’ll simply provide some extra frontcourt depth.

The Jazz had been carrying 13 players on standard contracts since waiving Shaquille Harrison on February 24. Since the NBA allows teams to dip below the required 14-player minimum for only two weeks at a time, they needed to add a player before the second half got underway this week, as we detailed on Monday. After signing Ilyasova, Utah will still have an open spot on its 15-man roster, but won’t have to fill it immediately — or at all.

DeMarcus Cousins‘ diminished mobility, brought on by back-to-back Achilles and ACL injuries, is behind the Rockets‘ decision to cut ties with him in the next few days, according to Kelly Iko of The Athletic.

Cousins had been filling the role the team envisioned when it signed him, Iko adds, serving as a backup to starting center Christian Wood and spacing the offense while playing in short bursts. However, an ankle injury that has kept Wood off the court since February 4 pushed Cousins into a starting role that he wasn’t ready to handle.

Coach Stephen Silas is working to build a defensive identity in his first season in Houston, and Cousins’ inability to cover ground was getting in the way. With Cousins defending, opponents were shooting an incredible 63.4% on shots from six feet and closer.

Silas liked Cousins and the veteran presence he brought to the locker room, Iko writes. Several young players sought advice from him, especially rookie Jae’Sean Tate. But Cousins’ inability to handle more minutes convinced the team that it needs to go in a different direction at center.

There’s more on the Cousins situation:

8:10pm: The Bucks have confirmed they’ve requested waivers on Ilyasova.

2:07pm: The Bucks are waiving forward Ersan Ilyasova before his salary for 2020/21 becomes guaranteed, according to Shams Charania of The Athletic (Twitter link).

Ilyasova is under contract for $7MM in ’20/21, the final year of his deal. However, that amount is fully non-guaranteed until tomorrow, so Milwaukee can avoid being on the hook for his salary by releasing him now.

On its surface, the decision isn’t a surprising one. Ilyasova saw his role reduced in 2019/20, as he recorded 6.6 PPG and 4.8 RPG in 63 games, playing just 15.7 minutes per contest. In the postseason, he logged just 23 minutes in three games.

However, the implications of waiving him are worth noting. He was expected to be moved to Sacramento part of the deal that would have sent Bogdan Bogdanovic to Milwaukee in a sign-and-trade.

However, that deal reportedly fell apart on Wednesday. With Ilyasova hitting waivers, it will be very difficult for the two sides to rekindle that agreement, since his $7MM expiring contract was important for salary-matching purposes. In other words, the Bucks’ decision to cut Ilyasova suggests they really are moving on from Bogdanovic.

Ilyasova will be an unrestricted free agent able to sign outright with any team, assuming he goes unclaimed on waivers this weekend.