Sixers forward Georges Niang has entered the NBA’s health and safety protocols, the team announced today (Twitter link via Tim Bontemps of ESPN). Niang has already been ruled out for Wednesday’s game and if he registered a confirmed positive COVID-19 test, he figures to miss several more. He’d have to sit out at least 10 days or return two consecutive negative coronavirus tests at least 24 hours apart before being cleared to exit the protocols.

Several teams have been affected this month by positive COVID-19 tests. Brooklyn, Charlotte, Chicago, Milwaukee, New York, and the Lakers are among the clubs that have had three or more players in the protocols at the same time. The Sixers aren’t at that point yet, but they’ll likely test the rest of the team to make sure they’re not at risk of an outbreak.

Here are more COVID-related updates from around the league:

Hawks forward Cam Reddish, who is recovering from a wrist injury, went through a full practice on Thursday, according to coach Nate McMillan. Reddish did some shooting and participated in drills at 75% speed. He’s listed as probable to play on Friday.

Bogdan Bogdanovic still needs more time to return from his ankle injury, Sarah Spencer of the Atlanta Journal-Constitution reports in a series of tweets. “Bogi’s not doing anything other than shooting. He looks better,” McMillan said. “He’s up on his feet and he’s moving around.”

Second-year big man Onyeka Okongwu is continuing his rehab assignment from shoulder surgery. He’s with the G League College Park Skyhawks and is expected to play on Thursday.

The shorthanded Hornets surprised Atlanta on Sunday. They’re playing the second game of a back-to-back tonight against Philadelphia.

Bouknight and four other players were recalled from the franchise’s G League affiliate in Greensboro prior to Sunday’s game to fortify the roster.

Those players will be sidelined for at least 10 days unless they record two consecutive negative tests at least 24 hours apart. Charlotte is scheduled to play five games over the next 10 days — Sunday at Atlanta; two home games vs. Philadelphia Monday and Wednesday; another home game vs. Sacramento on Friday; and a road test against Dallas next Monday.

The team sent players and staff members home from the practice facility as a precautionary measure, ESPN’s Adrian Wojnarowski tweets. If all have tested positive, the Hornets could sign another player under the hardship exception, ESPN’s Bobby Marks tweets.

Charlotte is in the midst of a three-game losing streak but still has a winning record at 13-11. Ball had 36 points and nine assists against Milwaukee on Wednesday and is averaging 20.0 PPG, 8.3 APG and 7.7 RPG in his second NBA campaign. Rozier is the team’s third-leading scorer at 17.7 PPG, 3.6 APG and 3.5 RPG.

Until the duo returns, the Hornets will have to improvise in the backcourt with Ish Smith and Kelly Oubre likely to move into the starting lineup and Cody Martin and James Bouknight backing them up.

Plumlee has been sidelined with a calf injury since November 24 but was expected to return on Sunday. He’s averaging 6.8 PPG and 7.3 RPG as a starter. McDaniels is averaging 5.5 PPG and 3.3 RPG off the bench.

Jalen Suggs has looked more like a rookie than some of the other lottery picks in this year’s draft, but the Magic are willing to be patient with him, writes Austin David of The Orlando Sentinel. The No. 5 overall pick is struggling in his first month in the NBA, shooting just 31.2% from the field and 20.3% from three-point range while averaging 3.5 turnovers per game to go with his 3.5 assists.

But Suggs has held onto his starting job, and a rebuilding Orlando team is planning to give him the time he needs to learn how to be an NBA point guard. Head coach Jamahl Mosley is a strong believer in Suggs and says he’s constantly working to get better.

“The thing that I continue to tell everyone is that the way he’s seeing it and communicating it through film sessions, with our coaches, with myself on the sideline, he’s seeing it very well,” Mosley said. “Now it’s just a matter of putting the physical side of it to it, and understanding when to slow down, when to speed up, the right reads, when it takes shots. He’s getting better at it slowly but surely. So as he can continue to communicate it, the better he’ll be as he sees it on the physical side of it.”

The 3-3 Hawks have yet to recapture the momentum that propelled them to the Eastern Conference Finals last season, writes Chris Kirschner of The Athletic. With an intimidating schedule coming up in which Atlanta will play several 2021 playoff teams, Kirschner offers his thoughts on how the club can adjust.

While forwards Cam Reddish and John Collins have exhibited plenty of growth, other key Hawks players have struggled a bit. Point guard Trae Young is struggling to adjust to the league’s new free throw rules, while shooting guard Kevin Huerter is struggling to connect from deep.

Point guard Ish Smith will be playing for his 12th NBA franchise this season but his stint with the Hornets will be special, Sam Perley of the team’s website notes. Smith grew up in Charlotte, NC.

“I wanted to be home, I’m not going to lie to you,” Smith said. “I’m sure everybody is going mention it in every game we play. Every year, it’s about how many teams you’ve been on. I’m like look, somebody likes me. … [Being here] is something that I’m excited about, it’s something my family’s excited about. So, yeah, it is something I wanted to do.”

Smith signed a two-year deal with the Hornets last month.

Kelly Oubre‘s two-year deal with the Hornets, which was completed using cap space, is worth $12MM and $12.6MM in year two, tweets Keith Smith of Spotrac. That second year is only partially guaranteed for $5MM, however, so the agreement includes just $17MM in total guaranteed money.

AUGUST 7: The Hornets have officially signed Smith, the team announced today in a press release. Based on the order in which Charlotte completed its roster moves this week, it looks like the team signed Smith using its room exception after using up all its cap space. 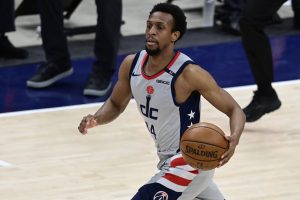 Charania reports (via Twitter) that it’s a two-year deal, with a team option on the second year. Smith will earn $4.5MM in the first year, Charania adds.

While the Hornets have LaMelo Ball atop their point guard depth chart and Terry Rozier as a strong second option, those two guards often share the court, so Charlotte needed to add a reliable backup after agreeing to send Devonte’ Graham to New Orleans in a sign-and-trade deal. It looks like the team has landed on Smith to fill that role.

The Wizards, meanwhile, are making major changes to their point guard position this offseason, as Russell Westbrook will be traded to the Lakers and Smith won’t be back. Washington has agreed to acquire Aaron Holiday from Indiana and is also finalizing a sign-and-trade deal to acquire Spencer Dinwiddie.

Wizards point guard Russell Westbrook is officially listed as questionable to play Saturday’s Game 3 against the Sixers due to a right ankle sprain, the team tweets. Westbrook injured his ankle in the second half of Game 2. He played just 29 minutes and shot 2-for-10 from the field. If he can’t go, Ish Smith would likely move into the lineup and play big minutes.

We have more from the Wizards: