Adams played for the Raptors in the Las Vegas Summer League, averaging 17.6 points, 10.6 rebounds, and 3.2 assists in five games. He also had a workout for the Celtics in late July.

There are more overseas signings to report:

4:02pm: McRae’s deal with Beijing will be worth $1.5MM for 25 games, sources tell Quinton Mayo of NBC Sports Washington (Twitter links). According to Mayo, McRae is set to depart today, pending the OK from the Chinese government.

2:21pm: Former NBA guard Jordan McRae is set to join the Beijing Ducks of the CBA, per Emiliano Carchia of Sportando (Twitter link). The Ducks have enjoyed great success added a lot of ex-NBA point guards in the recent past, including Jeremy Lin and Stephon Marbury.

The 6’5″ combo guard out of Tennessee spent parts of last season with the Pistons, Wizards and Nuggets. He also logged time with the Suns and Cavaliers across four NBA seasons. McRae holds career averages of 6.9 PPG, 1.8 RPG, and 1.4 APG, in 13.8 MPG, across 123 games.

This will not be McRae’s first tour of duty overseas, as he took an intermission from the NBA to serve with Saski Baskonia of the Spanish Liga ACB.

The Pistons began their in-market training camp on Wednesday with several players from their G League affiliate participating, according to Rod Beard of the Detroit News (Twitter link). Tre’Shawn Thurman, Tra-Deon Hollins, Adam Woodbury, Khalil Iverson, and Craig Sword all played with the Grand Rapids Drive this season.

Beard also reports (via Twitter) that Pistons center Justin Patton had surgery Tuesday to repair a fractured right pinky finger. Additionally, Tony Snell returned home for personal reasons, and Jordan McRae will not be participating in the team portion of the in-market camp.

If the 2019/20 season can’t be resumed, few – if any – teams will be hit harder than the Bucks, who had an NBA-best 53-12 record before the league’s hiatus began. For now though, the club is still operating as if it will get a chance to resume play and pursue a championship, as Eric Woodyard of ESPN details.

“We are operating and functioning and just have a mentality that we will play,” Bucks head coach Mike Budenholzer said on Wednesday in a conference call. “… Luckily, Adam Silver and the league office, they’ll make the hard decisions and they’ll do what’s best for everybody, but I think it’s certainly important that we kind of operate and have a mentality that we will play again, and we’ll be excited about that if and when it does happen.”

While Budenholzer admitted that he has been using some of his unexpected time off to catch up on TV shows like ‘Ozark’ and ‘Game of Thrones,’ he has also been spending plenty of time studying potential playoff opponents. As Woodyard relays, the Bucks’ head coach has focused on Brooklyn and Orlando, but is also looking at film on possible Eastern Conference opponents beyond the first round.

Pistons forward Blake Griffin hasn’t discussed his future with the team’s front office since the franchise went into full rebuild mode, he told the Detroit Free Press. Griffin is making good progress from the arthroscopic debridement of his left knee he underwent in January, the second surgical procedure he had on the knee in less than nine months.

“My focus is on what I can control and that’s my rehab and getting back on the court,” he said. “When the time comes, I’ll have that conversation but I don’t think that time is right now.”

Griffin’s latest rehab has gone well and he expects to do his usual offseason training regimen. His guaranteed $36.8MM cap charge for next season and a ’21/22 player option worth nearly $39MM will be nearly impossible to move in a trade.

When the Pacers play the Bulls on Friday night, they could be without a few notable players, including Malcolm Brogdon.

Brogdon is dealing with a left hip injury that limited him to only 11 minutes of game action on Wednesday night against the Bucks. The former Rookie of the Year award winner got an MRI and did not practice on Thursday, according to J. Michael of the Indianapolis Star.

Along with Brogdon, T.J. Warren, Doug McDermott, and JaKarr Sampson are all questionable for tomorrow’s contest.

Here’s more from out of the Central:

4:15pm: The waiver process is complete and McRae belongs to the Pistons, tweets Chris Haynes of Yahoo Sports.

3:07pm: The Pistons intend to claim guard Jordan McRae off waivers this afternoon, according to ESPN’s Adrian Wojnarowski (via Twitter). 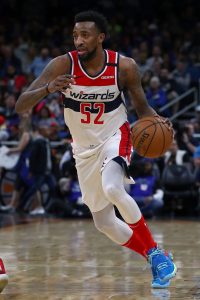 After reaching a buyout agreement with Denver on Sunday, McRae was officially released and appeared to be headed to Phoenix, with the Suns planning to place a waiver claim of their own. However, with Derrick Rose on the shelf due to an ankle injury, the Pistons were said to be eyeing McRae for backcourt depth.

Because the waiver priority order is determined by the NBA’s reverse standings, Detroit (20-42) will be awarded McRae over Phoenix (24-38) if both teams submit claims. Technically, one of the five teams with a worse record than the Pistons could swoop in and steal McRae, but there has been no indication that will happen.

A fourth-year shooting guard, McRae was putting up the best numbers of his career in D.C. this season, recording 12.8 PPG, 3.6 RPG, and 2.8 APG on .420/.377/.371 shooting for the Wizards, though injuries limited him to just 29 games. He was sent to Denver in a deadline deal for Shabazz Napier and averaged just 8.0 MPG in four games for the Nuggets, who have an overcrowded rotation.

The two sides reached a deal on Sunday that allowed McRae to get a new opportunity, with the Nuggets opening up a roster spot and saving some money. Although the 28-year-old agreed to surrender $390,424 of his minimum salary, that agreement will be negated by the Pistons’ waiver claim. Detroit will simply take on McRae’s $1,645,357 expiring contract, which will come off Denver’s books. The Pistons will be on the hook for paying the prorated salary remaining on the deal, while the Nuggets’ financial obligation will be extinguished.

By claiming McRae off waivers, the Pistons will get his Early Bird rights, which will give them added flexibility to re-sign him this summer. No corresponding roster move will be necessary for Detroit, since the team has an open spot after letting Derrick Walton‘s 10-day contract expire earlier this week.

After a long, successful run with the Grizzlies, Mike Conley was viewed heading into this season as the player who was going to help turn the Jazz from a solid playoff team into a bona fide contender. However, it has been an up-and-down first season in Utah for Conley, who is averaging just 13.5 PPG on 39.8% shooting.

Speaking to Tony Jones of The Athletic, Conley admitted he hasn’t been able to entirely block out the criticism he has faced this season, and that he understands that criticism.

“Nobody is more frustrated than me,” Conley said. “Not the fans, not the media, not my teammates. I’m not a guy who runs from looking in the mirror. But, at this point, I have to control what I can control. I have to stay locked in. I have to focus on what I can handle. I know what’s being said. But in a big way, it’s not in my control what people may think.”

As Conley gears up for the home stretch and looks to become a consistent, reliable contributor for the Jazz, let’s round up a few more notes from around the Western Conference…

11:59am: The Pistons have issued a press release confirming that Rose has been diagnosed with a grade two right ankle sprain. He’ll be re-evaluated in two weeks, according to the team.

11:07am: An MRI on Derrick Rose‘s sprained right ankle came back negative, according to Chris Haynes of Yahoo Sports. However, sources tell Haynes that the Pistons will be cautious with Rose’s injury and that he’ll be reassessed in “a few weeks.”

Rose, who received interest from contenders at the trade deadline, has a second year on his contract with Detroit, so the Pistons will want to make sure he’s as healthy as possible heading into the offseason — the former MVP will either play a key role on next year’s team or be a valuable trade chip this summer. Rose is expected to make a full recovery from his ankle injury, Haynes notes.

As the Pistons consider handing the reins to their young players for the rest of the season, they’re also keeping an eye on Jordan McRae, according to Haynes. Released by the Nuggets on Sunday night, McRae is expected to be claimed off waivers by the Suns on Wednesday.

However, based on Haynes’ report, it sounds like Detroit is mulling a waiver claim of its own. Because they trail Phoenix in the NBA standings, the Pistons would have the higher priority and would be awarded McRae if both teams submit a claim.

If the Pistons were to place a claim on McRae, no corresponding roster move would be necessary, since they have room on their 15-man roster.

Allen Crabbe surrendered $681,544 in his buyout agreement with the Timberwolves, according to reports from Dane Moore of ZoneCoverage.com and Jeff Siegel of Early Bird Rights (Twitter links). That’s more than the veteran wing would earn if he signs a rest-of-season deal with a new team after clearing waivers, but it wasn’t quite enough to get Minnesota below the luxury-tax threshold, as Moore and Siegel note.

If the Timberwolves are dead-set on getting out of tax territory, buying out Evan Turner remains a possible path, but it appears less likely now that he would no longer retain his playoff eligibility if he’s released.

The Timberwolves’ other option for sneaking below the tax line would be to cut a little-used player who is likely to be claimed on waivers, like Miami did at the end of last season with Rodney McGruder. That’s a risky alternative though, since any player valuable enough to be claimed on waivers probably isn’t someone Minnesota wants to lose.

Here are more details on the latest round of buyouts from around the NBA: