A series of NBA free agents have signed contracts with the G League, according to the NBAGL transactions log. Veteran guard Quinn Cook and former Kings Jahmi’us Ramsey and Robert Woodard II – both of whom were waived earlier this month – are among the players entering the G League.

Cook, who has 188 career NBA appearances under his belt, began the 2021/22 season playing overseas with Lokomotiv Kuban, but left the Russian team in December in what was deemed a mutual decision. Ramsey and Woodard were second-round picks in the 2020 draft, but never developed into regular rotation players in Sacramento, appearing in just 32 and 25 total games, respectively.

Woodard was initially claimed by the Iowa Wolves and has since been traded to the Oklahoma City Blue (the Thunder‘s NBAGL affiliate). Cook and Ramsey signed their contracts more recently and have yet to land with new teams.

Malik Fitts, Ky Bowman, Karim Mane, and Daulton Hommes are among the other players with NBA experience who have signed G League contracts within the last week. Although Hommes technically has yet to appear in an NBA regular season game, he spent the first two months of this season on a two-way deal with New Orleans, earning a year of NBA service.

Fitts’ returning rights belong to the Agua Caliente Clippers of Ontario, while Bowman has been traded to the Austin Spurs. Mane has landed with the Greensboro Swarm, the Hornets‘ G League team, while Hommes rejoined the Birmingham Squadron, the Pelicans‘ affiliate.

Finally, former Warriors and Magic guard Mychal Mulder has also signed a G League contract, a source tells our JD Shaw (Twitter link). Mulder, who was waived by Orlando last month, appeared in 15 games this season and has played in 82 total NBA contests since 2020.

None of these players’ rights are held by an NBA team, so they remain free to sign a standard contract or a two-way deal with any of the league’s 30 clubs.

Kings rookie Tyrese Haliburton has gotten off to a fast off the bench during his rookie season, averaging 13.2 PPG and 5.4 APG. However, the young guard isn’t concerned about not being in the starting lineup (he’s started just two games this season), according to The Sacramento Bee’s Jason Anderson.

Instead of worrying about his place in the lineup, he switched the subject of discussion to the new fad NBA Top Shot.

“Naw, I’ve been on NBA Top Shot all day,” Haliburton said, via Anderson. “… I’ve been trying to explain to my teammates why they should get into it. There are two things that a lot of us love and that’s money and basketball, so put them together and good things can happen.”

Here’s more around the Pacific Division:

Bowman spent last season with the Warriors after going undrafted out of Boston College, averaging 7.4 points, 2.9 assists and 22.6 minutes in 45 games, including 12 starts. Bowman had his two-way contract converted into a multiyear standard deal in February, but only the 2019/20 salary was guaranteed. Golden State waived him last month.

Ford is also an undrafted rookie out of the same college. A two-time member of the All-WCC team, he was the second-leading scorer in the West Coast Conference in 2019/20, averaging 21.9 PPG.

Los Angeles now has 17 players under contract, including 14 on guaranteed deals and a pair on two-way pacts. Rayjon Tucker, the Clippers’ other player without a fully guaranteed salary, remains under contract for now, but could also be waived soon if the team doesn’t intend to open the regular season with a full roster.

Any of the waived players could eventually resurface with the Clippers’ G League team, Agua Caliente.

DECEMBER 1: The Clippers have officially signed Bowman, the team announced today in a press release.

NOVEMBER 25: The Clippers have reached an agreement with guard Ky Bowman, allowing him to compete for a roster spot in training camp next month, according to Shams Charania of The Athletic (Twitter link).

It figures to be a minimum-salary contract, as Andrew Greif of The Los Angeles Times tweets. It also doesn’t sound like it’ll be fully guaranteed.

Bowman spent last season with the Warriors after going undrafted out of Boston College, averaging 7.4 points, 2.9 assists and 22.6 minutes in 45 games, including 12 starts.

Bowman had his two-way contract converted into a multiyear standard deal in February, but only the 2019/20 salary was guaranteed. As a result, Golden State was able to waive him last week without being on the hook for any additional money.

1:33pm: The Warriors have officially confirmed in a press release that they’ve waived Bowman. If he clears waivers, he’ll be free to sign with any NBA team.

1:07pm: The Warriors will waive Ky Bowman, who saw significant playing time as Golden State dealt with injuries last season, tweets Shams Charania of The Athletic. Sources tell Charania that other teams have interest in signing the 23-year-old point guard.

Bowman inked a two-way deal with the Warriors last summer after going undrafted out of Boston College. That was converted in February to a standard contract, which included non-guaranteed minimum salaries for the next two seasons.

The move comes after the Warriors drafted point guard Nico Mannion in the second round of Wednesday’s draft.

Brisbane Bullets big man Will Magnay, who has played in Australia’s NBL since 2017, said this week on the Gibbo Goes One-On-One podcast that the Warriors had interest in him earlier this year, but never formally offered him a 10-day contract.

While Mavericks guard Luka Doncic seems to be over the ankle issues that bothered him earlier in the season, he’s missing Sunday’s game vs. Minnesota with a new injury — a left thumb sprain. Doncic played through the injury on Friday, but struggled to work around it, per an ESPN report.

“I didn’t know how important the thumb was to hold the ball,” Doncic said on Friday. “It was tough. … I wasn’t myself today. Just have to learn from that and move on.”

Head coach Rick Carlisle said that he’s not sure about Doncic’s status for Monday’s game against Chicago.

Rookie guard Ky Bowman injured his right ankle late in the Warriors‘ blowout loss to the Lakers on Thursday night, and head coach Steve Kerr said after the game that he expects Bowman to miss some time as a result of that injury.

“He rolled his ankle pretty well,” Kerr told reporters, including Ali Thanawalla of NBC Sports Bay Area. “It’s not going to be a day-to-day thing. He’s going to be out a little bit. He won’t go on the trip (to Phoenix) and I think he’ll get an MRI (on Friday).”

With Andrew Wiggins and Jordan Poole also banged up, the Warriors’ backcourt might be extremely thin on Saturday vs. Phoenix. However, there’s a chance reinforcements could be coming by Sunday in the form of a two-time MVP.

Here’s more on that, along with a couple other Warriors-related notes:

FEBRUARY 7: The Warriors have officially promoted Bowman to the 15-man roster and signed him to his new contract, the team announced in a press release.

FEBRUARY 6: The Warriors have agreed to a multiyear deal with Ky Bowman, Shams Charania of The Athletic reports (Twitter link). Bowman had been on a two-way deal with the team.

Players on two-way contracts are subjected to at most 45 days with the NBA club, which includes non-game days. Bowman had used up his full 45 days with the Warriors, so once the new deal is official, he’ll be able to return to the NBA.

Bowman has appeared in 37 games for the Warriors this year. The point guard, who went undrafted last June, is averaging 7.3 points with a career-high of 24, which came in a late November contest against Oklahoma City. With D’Angelo Russell out of the picture, Bowman should get plenty of opportunity, though Andrew Wiggins looms as a competitor for shots.

The Warriors’ deadline deals left them with just nine players on their standard roster, so more signings will be coming, including the possible promotion of Marquese Chriss. Golden State won’t be able to sign two-way replacements for Bowman and/or Chriss, since the deadline for two-way signings passed on January 15.

January 15 is the last day that NBA teams can sign a player to a two-way contract this season. After that date, teams can still waive two-way players or promote them to their 15-man rosters, but they can’t bring aboard new players on two-way contracts as replacements.

With that deadline looming, we could get a mini-flurry of activity related to two-way deals this week. While it’s impossible to predict which teams will simply choose to replace one two-way player with a new one, there are a few specific situations worth keeping an eye on, based on certain players’ performances or teams’ roster situations.

Here are a few two-way contract situations to watch this week:

The Suns, Cavaliers, and Heat

The Suns and Cavaliers are currently the only two teams not carrying a pair of players on two-way contracts, while the Heat are expected to join them tomorrow.

Phoenix has only had one player (Jared Harper) on a two-way contract all season long, but it would still be a surprise not to see the team add a second two-way player by Wednesday. Cleveland, meanwhile, just waived Levi Randolph on Sunday, while Miami is poised to promote Chris Silva to the 15-man roster, opening up a two-way slot for each club. 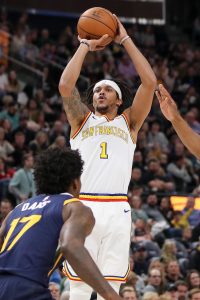 Rotation players Lee and Bowman have been two of the most likely candidates for promotions all season long. The Warriors have a pair of open roster spots, but based on their hard cap, they only have the flexibility to promote one of their two-way players for now.

Lee is expected to be first in line, as we heard when Golden State waived Marquese Chriss last week. A deal appeared imminent at that time, but nothing has been completed yet, even now that Lee has reached his 45-day NBA limit. It’s possible the two sides are still haggling over the length of the contract (the Warriors could offer as many as four years), but the team may just be taking its time to maximize its financial flexibility below the hard cap.

Assuming Lee is promoted by Wednesday, as expected, Golden State figures to add a new two-way player to pair with Bowman, who may get a promotion of his own later in the season. The Dubs’ new two-way player would be able to spend up to 24 days in the NBA before the end of the G League season.

Keith Smith of RealGM suggested on Sunday (via Twitter) that the Nets will likely move Luwawu-Cabarrot to the 15-man roster in the coming days, on either a standard contract or a 10-day deal.

Brooklyn won’t technically have a roster spot open until Justin Anderson‘s 10-day pact expires on Wednesday night, but could terminate that contract a day or two early in order to promote Luwawu-Cabarrot and sign a new two-way player by Wednesday’s deadline.

Teams around the NBA are keeping an eye on Pelle, who only has a few NBA days left on his two-way deal, according to Keith Pompey of The Philadelphia Inquirer (Twitter links).

If the Sixers intend to promote Pelle, it’d be in their best interests to do it by Wednesday in order to sign a new two-way player to replace him. However, it remains unclear whether or not that will happen. After guaranteeing Trey Burke‘s salary last week, Philadelphia has a full 15-man roster and would probably have to release a player like Jonah Bolden, Raul Neto, or Kyle O’Quinn to make room for Pelle.