Despite the recent surge in COVID-19 breakthrough cases, the expectation around the NBA is that things will return roughly to normal for the 2021/22 season, writes ESPN’s Tim Bontemps in his offseason roundup.

Bontemps polled 10 executives and scouts on some of the most pressing questions of the offseason, such as who the best player will be this season (Giannis Antetokounmpo and Kevin Durant tied for first), the best moves of the offseason (the Heat signing Kyle Lowry won out over the Magic drafting Jalen Suggs and the Wizards getting off Russell Westbrook‘s contract), the worst moves (DeMar DeRozan‘s signing with the Bulls), and others.

The executives also gave their thoughts on why fewer teams seem to be tanking this season and who should be considered the favorites to win the title.

We have more news from around the world of hoops:

The Celtics initially drafted the rights to the 7-footer with the No. 16 pick in 2013 (one pick after reigning two-time MVP Giannis Antetokounmpo), packaging him in a draft-night deal with the Hawks. During the summer of 2014, with Nogueira still overseas, the Hawks sent his draft rights to the Raptors in a package that also included sharpshooting off-guard Lou Williams.

Nogueira played 141 games for the Raptors between 2014-18. Toronto decline to tender the big man an extension offer for the 2018/19 season, making him an unrestricted free agent in the summer of 2018. He opted to return overseas, playing for clubs in Spain and Bahrain. Nogueira posted career NBA averages of 3.2 PPG, 2.8 RPG, and 1.0 BPG in 12.4 MPG.

The 28-year-old alluded to incurring a new injury after a prior injury kept him off the court for the better part of two years.

“Certainly the sad moments [on the court] were those that took me away from the courts due to injuries,” Nogueira said in his Instagram post. “I always knew that returning to the [court] after almost two years away from her would be very difficult and challenging, but I was willing to take on more of this challenge in my career. However, last Tuesday, it happened again, so I made this difficult decision and asked to leave Fortaleza Basquete Cearense.”

Following a wild 2019 offseason, the NBA has been in a period of relative stability for the last several months. However, there are a number of tipping points on tap for the 2020 postseason and offseason that could re-inject some chaos into the basketball landscape, writes Tim Bontemps of ESPN.com.

According to Bontemps, people around the league will be keeping an especially close eye on teams like the Rockets and Sixers, who will be looking to make deep playoff runs after falling short of their goals in recent years. If those two teams are eliminated early in the postseason, it’s possible major changes could be made, with Mike D’Antoni and Brett Brown potentially on the way out and roster shakeups around the corner.

League insiders will also be curious to see whether the Warriors look to use their 2020 lottery pick as the centerpiece in a trade for another impact player, Bontemps writes. Most notably, all eyes will be on Milwaukee as Giannis Antetokounmpo decides whether to sign a super-max extension with the Bucks. For what it’s worth, Bontemps says every executive he spoke to expects Antetokounmpo to remain in Milwaukee.

Lucas Nogueira, who appeared in 141 games for the Raptors over the course of four NBA seasons from 2014-18, recently spoke to Gustavo Faldon of ESPN Brazil about his battles with depression and alcohol. Nogueira, who returned to Spain – where he began his professional career – last year when his contract with Toronto expired, said he has been sober for three months, but admitted that his drinking habits were a problem earlier in his career.

“I went out a lot,” Nogueira said. “In Spain, we had one game per week. You’re young, you have some money and no limits. You would eventually find the party. It’s Europe. I had no work ethic whatsoever. When I went to the U.S. I saw that a 15-year-old kid had more discipline than I did. It is a cultural thing.”

Having returned to his home country of Brazil, Nogueira is currently training in Sao Paulo in the hopes of staying in shape and eventually earning tryouts with NBA teams.

“If you asked me the same question four months ago, I’d say I didn’t know,” Nogueira said when asked about a potential NBA comeback. “Now I say I will be back. What makes me so confident is my training and my attitude. I’m ready for the challenge like I’ve never been.”

Semaj Christon, who appeared in 64 games for the Thunder during the 2016/17 season, will play in Israel this season, according to Emiliano Carchia of Sportando. Hapoel Be’er Sheva has announced the signing of the 25-year-old point guard, who split last season between China and Puerto Rico.

Christon was part of Oklahoma City’s rotation two seasons ago, averaging 2.9 points and 2.0 assists in about 15 minutes per game. The 55th pick in the 2014 draft, he was waived by the Thunder prior to the start of last season. A former star at Xavier, Christon played in the G League and Italy before coming to Oklahoma City.

Former Raptors center Lucas Nogueira will play in the Spanish League next season, tweets Emiliano Carchia of Sportando. Nogueira is signing a deal today to play for Montakit Fuenlabrada, Carchia adds, and an official announcement is expected soon.

Nogueira spent the past four years in Toronto, but didn’t receive a qualifying offer when the season ended. That made him an unrestricted free agent, but there wasn’t much NBA interest in the 26-year-old. His fate in Toronto was sealed when the Raptors signed veteran big man Greg Monroe last month.

Nogueira peaked during the 2016/17 season when he averaged 4.4 points and 4.3 rebounds in 57 games while playing about 19 minutes per night. His playing time was cut in half last season and he appeared in just 49 games.

AUGUST 13: While the Raptors haven’t yet issued a press release confirming the move, Monroe has officially signed with the club, per the NBA’s transactions log.

AUGUST 6: Free agent center Greg Monroe has agreed to a contract with the Raptors, tweets Shams Charania of Yahoo Sports. 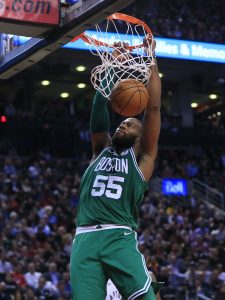 Monroe will get a one-year, $2.2MM deal, Charania adds (Twitter link) and will move from one Eastern Conference contender to another after finishing last season with the Celtics. Monroe will fill the backup center slot, according to Josh Lewenberg of TSN (Twitter link), who reported Toronto’s interest in Monroe last week.

The Raptors had their $5.3MM mid-level exception available, but are concerned about adding to their luxury tax bill. Toronto already had more than $137MM committed for next season before adding Monroe. He will become the 14th player on the roster with a fully or partially guaranteed contract.

An eight-year veteran, Monroe averaged 10.3 points and 6.9 rebounds last season while splitting time between the Bucks, Suns and Celtics. He was sent from Milwaukee to Phoenix in November as part of the Eric Bledsoe deal, then signed with the Celtics in February after agreeing to a buyout.

The addition of Monroe may signal the end of the Raptors’ relationship with Lucas Nogueira, who has been with the organization for the past four seasons. The free agent center got into 49 games last year and scored 2.5 points per night.

Free agent center Greg Monroe could be a candidate to fill a roster opening in Toronto, according to Josh Lewenberg of TSN.

Monroe, who spent time with the Bucks, Suns and Celtics last season, would give the Raptors an experienced low-post scorer and add to their frontcourt depth. Although his playing time was inconsistent last year, Monroe still averaged 10.3 points and 6.9 rebounds in 51 games.

Toronto has a $5.3MM mid-level exception available, but Lewenberg notes that the franchise is already well into luxury tax territory and may prefer to fill out its roster with a veteran’s minimum contract. The team has 13 players with fully or partially guaranteed deals, and NBA rules require teams to carry at least 14 on their rosters.

Another possibility is re-signing free agent center Lucas Nogueira, although Lewenberg sees that as unlikely. Nogueira, who has spent his entire four-year career in Toronto, appeared in 49 games last season, averaging 2.5 points per night.

The team may also consider Chris Boucher, who held a two-way contract with the Warriors last season and appeared in one NBA game. Boucher will be in training camp on an Exhibit 10 deal and impressed new coach Nick Nurse during summer league, especially when he was used at center. Lewenberg states that the Raptors won’t rush to fill their roster opening, so Boucher may get a chance to audition for the spot in camp.

VanVleet, the most notable of the three players, had a breakout season for the Raptors in 2017/18. The leader of the team’s second unit, VanVleet averaged 8.6 PPG and 3.2 APG with a .414 3PT% and was a finalist for the league’s Sixth Man of the Year award. His qualifying offer is worth just under $1.7MM.

As Michael Grange of Sportsnet.ca detailed earlier today, the Raptors are wary of a rival suitor back-loading an offer sheet to VanVleet via the Arenas provision. However, if the 24-year-old doesn’t receive any over-the-top offers from other teams, there’s a good chance he’ll remain in Toronto on a new multiyear deal.

As for De Colo, he hasn’t played in the NBA since the 2013/14 season, but the Raptors have retained the right of first refusal on the 31-year-old since then by issuing qualifying offers each year. De Colo seems unlikely to return to the NBA at this point, given his success overseas — the CSKA Moscow guard has earned First Team All-EuroLeague honors for three straight seasons. As such, the Raps’ QO looks like a mere formality.

The only Raptors player eligible for restricted free agency who didn’t receive a qualifying offer today is Lucas Nogueira. The team has a couple more days to issue a QO if it changes its mind, but it appears Nogueira will become an unrestricted free agent when the new league year begins.

After barely playing for the Celtics this season, two-way player Jabari Bird has averaged 22.8 MPG in Boston’s last two games, posting 12.0 PPG, 4.0 RPG, and 2.5 APG while shooting 11-of-15 from the field. Despite his solid play lately, Bird won’t be postseason-eligible for the Celtics unless the team converts his two-way contract into a standard deal. And to do that, the C’s would have to waive one of their 15 players with guaranteed contracts.

There are no obvious expendable pieces on the Celtics’ roster, so the idea of Bird joining the team for the postseason may be a long shot. For his part, the rookie tells A. Sherrod Blakely of NBC Sports Boston that he’s focused on playing hard during the regular season and “trying to control what I can control.” Brad Stevens also deferred on the topic of Bird becoming playoff-eligible, but had praise for the youngster.

“Those aren’t my discussions or my job,” the Celtics head coach said of Bird’s contract situation. “But at the end of the day, I think he is playing well. He’s doing some good things. I thought offensively he was pretty good, especially early. He’s done a good job in the last couple of games and will probably play some of the next two.”