The NBA has instituted a rule change this season that will penalize teams whose bench players and coaches are crowding the sidelines and standing for long periods of time, according to Ira Winderman of The South Florida Sun Sentinel (all Twitter links). Teams will initially be warned, then get a delay-of-game warning, then be assessed a technical foul.

Winderman clarifies that the rule won’t apply at the end of games, when everyone is often standing, and won’t affect head coaches as long as they’re not interfering with play. The goal is to reduce instances of players and coaches on the bench attempting to blatantly distract players on the court.

The new rule will likely become informally known as the Theo Pinson Rule — Pinson was viewed as the unofficial ring leader of the Mavericks’ bench mob that earned the team $175K in fines during the playoffs due to its “bench decorum” violations. However, Pinson is unfazed by the change, joking to reporters on Monday that he intends to “find a loophole,” as Brad Townsend of The Dallas Morning News writes.

Utah opted not to tender a qualifying offer to Paschall in June, allowing the 25-year-old to become an unrestricted free agent. After spending his first two seasons with the Warriors, Paschall was traded to the Jazz in the 2021 offseason.

It doesn’t appear that veteran center Marc Gasol will be making an NBA comeback this fall. As Johnny Askounis of Eurhoops.net relays, multiple reports out of Spain have indicated that Gasol intends to remain a member of Girona, the Spanish team he owns and plays for.

Girona competed this past season in Spain’s second-division Liga Española de Baloncesto, but has received a promotion to the top Spanish league, Liga Endesa, for the 2022/23 season. Having helped his team earn that promotion by averaging 14.5 PPG and 8.2 RPG this season, Gasol’s goal is now to actually play for Girona in Liga Endesa competition, according to Askounis.

With Brook Lopez sidelined indefinitely, the Bucks and center Marc Gasol, who is currently playing for Girona in Spain, had discussed the possibility of a possible late-season deal, according to Zach Lowe of ESPN (Insider link). However, Lowe suggests that a union “does not appear to be in the cards” now that Milwaukee has acquired Serge Ibaka.

It’s worth noting that the Bucks have three open spots on their 15-man roster following the trade deadline, so there still could be room for Gasol down the road, and it’s not like he and Ibaka haven’t had success teaming up in the past — the two vets played key roles for the 2019 champion Raptors. Still, Milwaukee may be looking to address other positions with those open roster spots, and there’s no guarantee Gasol will look to return to the NBA when his season is over in Spain.

Here are a few more highlights from Lowe’s post-deadline roundup:

The Nuggets‘ first attempt to trade Bol Bol didn’t work out, but they’re happy with the return they got on the second try, writes Mike Singer of The Denver Post. Denver officially completed a three-team deal today that sends out Bol and PJ Dozier in exchange for Bryn Forbes, a dangerous outside shooter who will have a clearly defined role on the team.

“Really for me, it comes down to Bryn Forbes is a career 42% three-point shooter,” coach Michael Malone said. “You go back to last year in their run in winning a world championship in Milwaukee, that first-round series they swept Miami, and Bryn Forbes averaged 15 points a game.”

Currently ranked 18th in three-point shooting percentage, the Nuggets have a need for Forbes, who is expected to make his debut either Friday or Sunday. Malone was disappointed to part with Dozier, who will miss the rest of the season with a torn ACL. Malone offered to give Dozier a role on his staff if he ever goes into coaching.

Marc Gasol: “Door Is Not Closed” On An NBA Comeback

Marc Gasol is currently playing in Spain, but his NBA career may not be over. Gasol, who will turn 37 this month, is both an owner and player with Basquet Girona. In an interview with the Spanish publication Cadenaser, he indicated that he still has options to return to the NBA, relays Dario Skerletic of Sportando.

“In the NBA they know I haven’t closed the door,” he said. “Now I wanted to do this thing (play at Girona) and they understood it, perhaps more than many people here in Spain. The door is not closed, I am not saying that I will return or that I am evaluating it, but I know that there is interest on their part … at the moment I am focused on Girona.”

A three-time All-Star and former Defensive Player of the Year, Gasol played 13 NBA seasons before deciding to return to his native country. He was the Lakers’ starting center for most of last season, averaging 5.0 points and 4.1 rebounds in 52 games.

However, Gasol didn’t see much playing time after Los Angeles signed Andre Drummond midway through the season. In September, he was traded to the Grizzlies, who released him five days later.

Gasol indicated that he’s not in a hurry to make a decision about his future. The Spanish League schedule runs through mid-May, and with Gasol determined to honor his commitment to Girona, it’s unlikely that he’ll be back in the NBA this season.

“The most precious thing we have is time,” he said. “We have little time and each of us decides how to invest it. to live unique experiences, I wanted to give this time to a city that supported me in difficult moments in sport, when I started my career at the age of 21.”

Marc Gasol To Play For Girona

As expected, veteran center Marc Gasol has announced that he’ll resume his playing career with Girona, a team based in Catalonia, Spain (video link). Gasol is also the owner and president of the franchise, which plays in the LEB Oro, Spain’s second league. 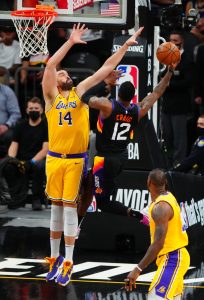 A three-time All-Star and the NBA’s 2013 Defensive Player of the Year, Gasol spent the 2020/21 season with the Lakers, but his relationship with the team soured after L.A. signed Andre Drummond as its new starting center in the second half. The Lakers didn’t re-sign Drummond during the offseason, but added centers Dwight Howard and DeAndre Jordan, paving the way for Gasol’s exit. He was traded to the Grizzlies in a salary-dump deal and Memphis subsequently waived him.

Gasol’s desire to return home to Spain was a factor in his split with the Lakers. Reports all the way back in mid-September indicated that he would likely end up joining Girona, but it took him a little while to finalize that decision. FC Barcelona was among the other teams in Europe that attempted to recruit Gasol as he weighed his options.

Gasol, who will turn 37 in January, would likely have NBA suitors if he decided to return stateside. Although he’s not the perennial All-NBA candidate he once was, the veteran big man remains a savvy defender and a strong passer who can stretch the floor on offense.

However, it’s unclear whether or not Gasol intends to attempt an NBA comeback either in 2022 or further down the road. He said today that he’ll weigh his future after playing out the season with Girona.

Gironia is off to a 2-7 start in LEB Oro play so far this season, so Gasol will be looking to reverse the team’s fortunes and push for a playoff spot.

Navarro classified the team’s discussions with Gasol as “conversations” rather than “negotiations,” but suggested that the Spanish center hasn’t ruled out the possibility. Gasol, who was traded from the Lakers to the Grizzlies and then was waived during the offseason, decided to return home to Spain rather than continue his career in the NBA. It remains to be seen if he’ll play on either side of the Atlantic in 2021/22.

Scariolo coached Gasol on the Spanish national team and as an assistant in Toronto, so he has an existing relationship with the veteran center. However, Gasol – who was traded to Memphis and then waived in September – appears content to spend time with his family in Spain rather than joining another NBA or EuroLeague team anytime soon. There were rumors last month that Gasol would be playing for Girona, the Spanish club he owns, but that hasn’t come to fruition yet.

Knicks guard Evan Fournier has expressed confidence in the future of France’s national team, discussing his vision for the program in an interview with L’Equipe (hat tip to Sportando).

Fournier, 28, was part of the French team that nearly defeated Team USA in the Gold Medal Olympic game last month. While his team narrowly missed out on a gold medal, it did beat Team USA in an exhibition contest two weeks earlier. Fournier led all scorers with 28 points during that outing.

“We have to promote our sport culture, stop being afraid of being ambitious,” Fournier explained. “I want this to change and our team can do it. We are not afraid of anyone. My vision is to become as dominant as Spain has been in the last fifteen years. Tokyo is just our first final … I want to win Eurobasket 2022.  This is not the time to stop. We have the opportunity to build a dynasty.

“This team must grow every summer, relive the same emotions, reactivate what has made possible our success in Tokyo: putting aside the ego, fighting for each other, having this winning mentality. And starting over every year. It is an opportunity for our sport, but also something that can go beyond basketball, help sport in France. We can set an example for an entire generation.”