The Nets‘ season could be over in a matter of hours, as the team faces an elimination game at home on Monday night, down 3-0 to Boston in its first-round series.

While a first-round sweep would be a disastrous outcome for a club that entered the season as a championship favorite and would certainly increase scrutiny on head coach Steve Nash, one source close to the situation tells Substack writer Marc Stein that he doesn’t expect Nash to become a fall guy for a disappointing playoff run.

As Stein and his source observe, Nash has faced an inordinate number of challenges during the 2021/22 season, including Kyrie Irving‘s vaccination decision, James Harden‘s trade request, and injuries to players like Kevin Durant and Joe Harris. Stein suggests that Nash shouldn’t avoid blame for the Nets’ struggles, but says there are many larger issues in play as well.

After a disappointing 25-win season for the Pacers, Gregg Doyel of The Indianapolis Star contends that the team should continue to reshape its roster this offseason, with a focus on building around a core duo of Tyrese Haliburton and Myles Turner. Doyel thinks that 2021 first-round picks Isaiah Jackson and Chris Duarte should be in the conversation for the starting lineup next season, but shouldn’t be considered locks by any means.

Doyel would also like to see Indiana part with Malcolm Brogdon and Buddy Hield, and not bring back free agent T.J. Warren, who only played four games over the past two seasons (zero in 2021/22) while recovering from consecutive stress fractures in his left foot.

The draft will be key, Doyel notes. The Pacers have a 42.1% chance of landing a top-four pick, and will own the Cavs’ first-round pick if Cleveland beats Atlanta and advances as the No. 8 seed (the Cavs keep the pick otherwise). Indiana also owns a couple of second-round picks from Houston (No. 31) and Phoenix (No. 58).

People around the NBA have speculated for years about the possibility of Hornets president of basketball operations Mitch Kupchak leaving the organization or transitioning into more of an advisory role, but those whispers have intensified this year, according to Jake Fischer of Bleacher Report. As Fischer explains, Kupchak’s current contract with Charlotte is believed to expire at the end of this season.

It’s unclear at this point what Kupchak’s future holds, but Fischer says two names have frequently been cited as potential candidates for the top job in the Hornets’ front office if a change occurs. One is current assistant general manager Buzz Peterson, who was roommates with team owner Michael Jordan at UNC. The other is Bulls GM Marc Eversley, who interviewed for the job in 2018 before the Hornets hired Kupchak.

Malcolm Brogdon has been the subject of some trade speculation since the team acquired Tyrese Haliburton — some rival executives reportedly believe the Pacers will look to move the veteran guard this offseason.

However, speaking to reporters on Monday as part of his exit interview, Brogdon said he feels comfortable with his current team and has a “great relationship” with head coach Rick Carlisle, per Joel Lorenzi of The Indianapolis Star. In other words, while it’s possible the Pacers could trade him this offseason, it doesn’t sound like that would be his preference.

“I want to be here,” Brogdon said. “I feel like I’ve built a home here. They’ve paid me here and extended me here. And I fit. I like Carlisle, I like the coaching staff and I love my teammates. This is a player’s league, but a lot of time we don’t make the decisions. So for me it’s about getting healthy, getting better this summer and coming back ready.”

Pacers head coach Rick Carlisle appears committed to his role for the future, Marc Stein writes at Substack. As we recently relayed, Carlisle denied that he’s interested in switching to a front office role, addressing the rumors in a brief statement.

“I just want to be completely clear on this. I don’t know what the assumptions are that people are making about this, why this would be the case,” Carlisle said, according to Stein. “When I came here, we had hoped to have a really good season this year. We had some struggles early, and it morphed into a change in direction, but that’s OK. It has not quelled my enthusiasm for being back with the Indiana Pacers or taking on this challenge one single bit.”

The Pacers are viewed as a team that may pursue Mavericks guard Jalen Brunson in free agency this summer, Stein reports. Brunson played under Carlisle for three years in Dallas. Signing the 25-year-old could motivate Carlisle further, though Detroit and New York are also expected to bid for his services.

There’s more out of Indiana today:

Considered a prime trade candidate earlier in the season, Pacers center Myles Turner ultimately stayed put after he injured his foot and Indiana opted to move Domantas Sabonis instead. Appearing on the HoopsHype podcast with Michael Scotto, Scott Agness of Fieldhouse Files said he believes Indiana should either trade or extend Turner this offseason rather than having him enter 2022/23 on an expiring contract with a retooling team.

Agness believes the Pacers are more likely to bring back Turner than to move him, but notes that the Mavericks would be one team of interest to Turner if he’s shopped, since he was born and raised in the Dallas area. Scotto spoke to four NBA executives who believe the Pacers could get at least a protected first-round pick for Turner if he’s traded this offseason.

Within the same podcast, Agness acknowledged that the Pacers could gauge the trade market for Malcolm Brogdon and Buddy Hield, but he doesn’t view either player as a lock to be dealt. Agness also expressed skepticism that Indiana will be able to re-sign big man Jalen Smith, since he expects other teams to exceed a $4.67MM starting salary, which is the most the Pacers can offer. 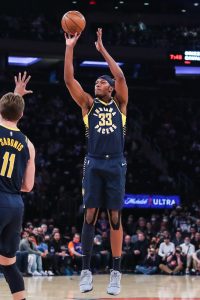 Turner, who turned 26 last Thursday, has been sidelined since January 14 due to a stress reaction in his left foot. According to Wojnarowski, Turner has made “good progress” in his recovery, but the Pacers only have seven games remaining and are out of the playoff hunt, so it doesn’t make sense to bring back the big man at this point.

Prior to going down with his foot injury, Turner averaged 12.9 PPG, 7.1 RPG, and 2.8 BPG in 42 games (29.4 MPG) for Indiana. His name surfaced in several trade rumors earlier in the season, but his injury diminished his value to some extent and Indiana ended up moving its other center, Domantas Sabonis, while hanging onto Turner.

It’s still possible the retooling squad will shop Turner this offseason ahead of the final year of his contract. But with Sabonis no longer in the mix, the Pacers may be more inclined to keep Turner, perhaps envisioning him as their long-term starting center.

As Bobby Marks of ESPN observes (via Twitter), Turner is eligible for a contract extension this offseason and Indiana could theoretically use its cap room to to renegotiate the last year of his current deal, giving him a raise on next year’s $18MM salary as part of an extension agreement.

Swingman Justin Anderson is eager to display his skills after receiving a 10-day contract from the Pacers on Thursday, James Boyd of the Indianapolis Star writes.

“I just want to be out on the court and show my impact, show what I can bring. I’ve been biting at this for a long time,” Anderson said. “Unfortunately, injuries have kind of had me in and out of the NBA, but that’s over and done with. I only have two tibias, two legs, and both of those have been operated on, and I’m back stronger than ever.”

Pacers guard Keifer Sykes, a rookie at age 28, has taken a remarkable path to the NBA, according to James Boyd of The Indianapolis Star. It’s an in-depth look at Sykes’ journey — from the harrowing gun violence of his youth in Chicago’s South Side, to starring for the University of Wisconsin-Green Bay, several stops overseas and much, much more.

Sykes’ mother, Lisa, was thrilled when she learned that his contract had been guaranteed for the remainder of the season.

“My heart was just filled with so much joy when he got what he wanted, and that’s to play in the NBA for his dream,” Lisa Sykes said. “When I see him play against his favorite people, seeing him playing against Chris Paul and he went to Chris Paul’s camp, it’s like it’s (full) circle.”

It’s a fascinating story and I recommend checking out the full article.

Bulls All-Star Zach LaVine previously said that he won’t know in advance whether he’ll be able to play back-to-back games going forward. Chicago continues to monitor him daily, but coach Billy Donovan said that LaVine’s knee has been feeling much better since the All-Star break (Twitter links via Rob Schaefer of NBC Sports Chicago).

After playing against the Hawks on Thursday, LaVine didn’t appear on Chicago’s injury report on Friday and suited up for both ends of the back-to-back against the Bucks. He finished the game with 30 points, eight rebounds and six assists, but the Bulls dropped their fourth straight in a 118-112 loss. Chicago is now the No. 4 seed in the East with a 39-25 record.