The Jazz‘s player development track record is getting hard to ignore, according to Ben Dowsett of FiveThirtyEight.com, who points not to stars like Donovan Mitchell or Rudy Gobert, but to veterans like Joe Ingles, Jordan Clarkson, and – most recently – Royce O’Neale.

Dowsett contends that the mid-career leaps those players have made in Utah are in large part due to head coach Quin Snyder‘s developmental program. For his part, Snyder is reluctant to take credit, suggesting that the players themselves are the ones responsible for their positive strides.

“It’s a credit to the players,” Snyder said. “Sometimes you can be content, especially if you’re successful in this league and have established yourself, to do what you do, so to speak.”

“He was great,” head coach Gregg Popovich said of Murray. “His defense is not going to be noticed as much as offense, but he got us in situations where people were getting the ball and scoring. He scored. He disrupts at the defensive end. He played a heck of an all-around game.”

Trail Blazers forward Anfernee Simons has really started to blossom during his fourth year, writes Jason Quick of The Athletic.

A lot of Simons’ improvement appears to be a credit to his commitment to offseason workouts with longtime trainer Phil Beckner. One of Portland’s many undersized guards, Simons is averaging career highs of 12.6 PPG, 3.0 RPG, 2.4 APG and 22.8 MPG through his first five games during the 2021/22 season.

“Usually, he would train with me here and there,” Beckner said. “And at the start of the summer he wanted to know where I was going to be. I told him either Phoenix or Portland. So I asked him where he was going to be. His answer: ‘Wherever you are at.”’

JaMychal Green drew interest from a number of teams during free agency, Mike Singer of The Denver Post reports. Green caught the attention of the Timberwolves, Pelicans, Sixers, Spurs and Bucks. Minnesota even considered a possible sign-and-trade for the veteran forward, who opted to re-sign with the Nuggets on a two-year, $17MM deal.

Dennis Lindsey‘s transition from his executive VP of basketball operations position with the Jazz into an advisory role was framed as Lindsey’s call, but it was more of an ownership decision, according to Andy Larsen and Eric Walden of The Salt Lake Tribune.

As Larsen and Walden explain in an in-depth story, new Jazz owner Ryan Smith is making some changes to the front office — director of pro player personnel David Fredman was also told this week that his contract isn’t being renewed.

One factor in the decision to reassign Lindsey was a “long-running disconnect” between the executive and head coach Quin Snyder, per the Tribune’s report. According to Larsen and Walden, Lindsey and Snyder had numerous disagreements both on and off the court, including not seeing eye to eye on rotation and roster decisions. Snyder – along with many members of the front office – were frustrated by the selection of Udoka Azubuike in the first round of the 2020 draft, per Larsen and Walden.

Given Utah’s success during the 2020/21 season, Lindsey and Snyder were on better terms during the last year, but several people in the organization still felt that this week’s announcement reflected a feud being settled. “Quin won,” one source told The Tribune.

Although Lindsey has been the head of basketball operations in Utah in recent years, general manager Justin Zanik has run day-to-day operations in the front office since 2019 and he’ll continue to do so going forward, sources tell ESPN. Head coach Quin Snyder will also continue to have a “significant organizational voice,” says Wojnarowski (via Twitter).

New Jazz owner Ryan Smith is expected to take the opportunity to evaluate the basketball operations department to “see where it can be strengthened,” Woj adds (via Twitter). Tony Jones of The Athletic (all Twitter links) also suggests that more front office changes are on the way, with former Celtics president of basketball operations Danny Ainge among those who could be in the mix to join the Jazz. Ainge was linked to Utah immediately after word broke that he was stepping down from his job in Boston.

However, Wojnarowski stresses that Smith and Zanik have worked well together, and Jones says the plan is for Zanik to head up the basketball operations department going forward. If Ainge comes aboard, it won’t be to lead the front office, according to Jones. It’s unclear if Ainge would be interested in a role where he’s not making the final decisions.

Lindsey, confirming his move to an advisory position, shared a statement with Wojnarowski:

“In recent years, I have had conversations with the Miller family and then Ryan Smith when he came on board about moving into an advisory role. This is an appropriate time to make the transition with the organization on such solid footing. … I look forward to making contributions to the Jazz in a different way, while enjoying more time with my wife Becky and our four children.”

Tom Thibodeau has been named Coach of the Year, according to a league press release. 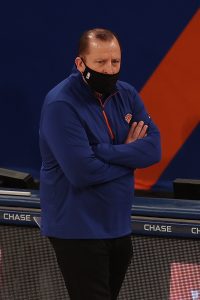 Thibodeau guided the Knicks to their first postseason appearance since the 2012/13 season. The Knicks finished the regular season with a 41-31 record, ending a string of seven consecutive losing seasons. They were 21-45 last season and 17-65 in 2018/19.

Suns coach Monty Williams actually received more first-place votes (45) than Thibodeau (43). However, Thibodeau earned 351 total points while Williams had 340 points.  The 11-point difference between the first- and second-place finishers was the smallest margin since the voting format was introduced in the 2002/03 season.

Thibodeau is the first Knicks coach since Pat Riley (1992/93) to win the award.

In limited minutes, Jazz All-Star shooting guard Donovan Mitchell looked like his old self Thursday night, his first game back since spraining his right ankle on April 16, writes Nick Friedell of ESPN. Mitchell scored 25 points in 26 minutes of game action.

The 24-year-old’s return to the floor helped galvanize the Jazz. Utah ultimately beat the Grizzlies 141-129 to knot their first-round series at 1-1.

“I felt better than I anticipated, and as a whole, I think the biggest thing as a team is we did a lot of good things tonight … so it made my job easier,” Mitchell said of his return to the Jazz. “I didn’t have to come in and just do everything. I was able to find my spots and attack. And kind of just do what I do. And my teammates made it really easy for me.”

During a TNT broadcast ahead of tonight’s Wizards-Pacers play-in matchup, the finalists for six big end-of-season 2020/21 awards were announced. Here is the full list, as voted on by reporters.

NBA Defensive Player of the Year:

NBA Rookie of the Year:

NBA Sixth Man of the Year:

NBA Coach of the Year:

Some of these current contenders are familiar with the hardware they’re up for again. Curry is a two-time MVP, having won the award previously in 2015 and 2016. Gobert and Green have both previously won Defensive Player of the Year awards — Green in 2017 and Gobert in 2018 and 2019. Thibodeau was voted Coach of the Year a decade ago while with the Bulls.

The winners for the awards will be announced during the 2020/21 NBA playoffs.

Suns head coach Monty Williams has won the 2020/21 Michael H. Goldberg award, as voted on by the National Basketball Coaches Association, according to ESPN’s Adrian Wojnarowski.

This award, introduced in 2017 and named after longtime NBCA executive director Michael H. Goldberg, is voted on by the NBA’s 30 head coaches, none of whom can vote for himself. However, it isn’t the NBA’s official Coach of the Year award, which is voted on by media members and is represented by the Red Auerbach Trophy. The winner of that award will be announced later in the year.

Williams earned the Coaches Association’s award after leading the Suns to a 51-21 record, good for second in the NBA. The club had the league’s sixth-ranked defense and seventh-ranked offense, Wojnarowski notes.

The Suns, who were 19-63 in 2018/19, became just the fifth team in NBA history to improve by at least 15 games in back-to-back seasons, per Woj. Williams accomplished that feat in his first two years in Phoenix despite dealing with pandemic-shortened seasons, making the feat even more impressive.

The previous winners of this award are as follows: