In a move that was expected, the Sixers announced they waived Sasha Kaun days after acquiring him. The Sixers acquired Kaun in a deal from the Cavs on Friday. Kaun, 31, played his college ball at Kansas and was selected with the 56th overall pick in the 2008 NBA draft. Kaun agreed to a two-year contract with the Cavaliers last summer, and still has one season remaining on that deal — he’s owed $1,333,420 in 2016/17. In his lone season in Cleveland, Kaun didn’t see much action, averaging only 3.8 minutes in 25 games.

Here’s more from the Atlantic Division:

5:52pm: The Sixers intend to waive Kaun, according to Wojnarowski (via Twitter). As I noted below, Cleveland sent Philadelphia enough cash to make the move worth the 76ers’ trouble, per Wojnarowski.

5:42pm: The Sixers and Cavaliers have completed a trade, according to a press release issued by the 76ers. The deal sends center Sasha Kaun and cash considerations to Philadelphia in exchange for the rights to Chu Chu Maduabum. Adrian Wojnarowski of The Vertical tweets that the move clears the way for the Cavs to finalize their signing of Chris Andersen.

Kaun, 31, played his college ball at Kansas and was selected with the 56th overall pick in the 2008 NBA draft. However, as a draft-and-stash prospect, it took him seven years to formally join an NBA roster. Kaun agreed to a two-year contract with the Cavaliers last summer, and still has one season remaining on that deal — he’s owed $1,333,420 in 2016/17.

In his lone season in Cleveland, Kaun didn’t see much action, averaging only 3.8 minutes in 25 games. While it’s possible he’ll see a larger role with the Sixers, Philadelphia has a logjam in its frontcourt at the moment, so this looks like a salary dump for Cleveland. I imagine the Cavs are sending the Sixers more than enough money to cover Kaun’s salary.

Meanwhile, the Cavs didn’t open up any cap room by moving Kaun, since cap holds for LeBron James and others ensure the team is still well over the cap. Wojnarowski’s suggestion that the move opens the door for the club to add Andersen is probably more about clearing a roster spot, and perhaps limiting the team’s tax bill.

Pistons owner Tom Gores credits the decision to unify the position of coach and chief basketball executive and the subsequent hiring of Stan Van Gundy to fill that post as the primary reason the team was able to advance to the playoffs this season, Keith Langlois of NBA.com relays. “I think throughout the league are disconnects between the floor and the front office, but not everybody can do what Stan can do,” Gores said. “Coach and then think big picture, high level and what’s good for the franchise long term. I thought that was a way to accelerate our progress and I had seen enough in terms of how that can be disconnected. Hopefully, it has, and we’re in the playoffs now.”

The owner also indicated that the team’s plan all along was to set itself up for sustained success, Langlois adds. “When we talked the first time, we said we wanted to win but never sacrifice the future and we didn’t know how that was going to play out,” Gores said. “Stan deserves a lot of credit. He came in, really quickly changed the culture. We worked together setting up the organization. When I met with Stan those couple years ago, what he had to say really impressed me. But more importantly now, he just delivers. He’s hard working, dedicated and I think he’s a great role model for our players in terms of preparation.”

The team’s success under Van Gundy has caught the eye of Wolves owner Glen Taylor, who’s reportedly thinking about mimicking that unified coach/executive structure. Here’s more from the Central Division:

The NBA placed restrictions on Jerry Colangelo after the Sixers hired him as chairman of basketball operations in December, sources told Adrian Wojnarowski of The Vertical. Rival executives were concerned about Colangelo’s access to star players as USA Basketball’s managing director, fearing he would have an advantage in courting top free agents, Wojnarowski continues. The limitations include Colangelo’s ability to communicate directly with players outside of USA Basketball activities, as well as his impact on the final voting process for national team and Olympic rosters, league sources indicated to Wojnarowski. The limitations will remain in place even though he relinquished his title as the Sixers’ chairman of basketball operations after his son Bryan was hired as president of basketball operations. Jerry Colangelo will now serve as a special adviser to the team’s ownership group, Wojnarowski notes.

In other developments around the league:

Steve Novak made it into only three games with the Bucks before a sprained left MCL prematurely ended his season, but the sharpshooter who played his high school and college ball in the state of Wisconsin has a strong desire that those games not be the only ones he ever plays in a Bucks uniform, as he makes clear to Charles F. Gardner of the Milwaukee Journal Sentinel. The 32-year-old is on an expiring contract but wants to re-sign with the Bucks, even though they won’t have more than non-Bird rights to him, and it appears he doesn’t plan on retiring anytime soon. “Being home has been unbelievable,” Novak said. “I see the team that we have and hopefully I can be a big part of that. I am a free agent this summer, but that’s my goal [to stay with the Bucks].”

See more from the Central Division:

The Cavaliers privately deny that they were making Iman Shumpert available in trade talk before the deadline last month, but some in the organization think he might be doing too much to justify the four-year, $40MM contract he signed last summer, reports Jason Lloyd of the Akron Beacon Journal. The fifth-year swingman is averaging career lows in points and field goal percentage since returning in December from a preseason wrist injury, and he often turns the ball over when he tries to drive to the hoop, Lloyd writes.

“His biggest thing for us is defending the best player every single night,” coach Tyronn Lue said. “His shot is going to come and go. Some games, he’s going to get six or seven shots, some games he gets two shots. I’m not really worried about his shots and his scoring. He just has to step up and shoot them with confidence. But for the most part, for Shump and for us, his value is every single night guarding the best player, which he’s done a great job of.”

Players on the Cavaliers were furious when the team let Kendrick Perkins leave in free agency this summer and instead signed Sasha Kaun, as Chris Haynes of the Northeast Ohio Media Group and the Cleveland Plain Dealer said in an appearance on “The Dan Patrick Show” (video link; transcription via Kurt Helin of ProBasketballTalk). They valued Perkins for his emotional leadership and the role of enforcer that he played, even though he doesn’t offer much else on the court at this point in his career, as Haynes detailed. Perkins is averaging 11.3 minutes per game in 15 appearances for the Pelicans on a one-year deal this season. See more from around the NBA:

Paul George has voiced some displeasure with the Pacers’ plan to move him to power forward, though he says he’s willing to stick with it, Candace Buckner of the Indianapolis Star reports.  George felt overmatched trying to guard Pelicans superstar Anthony Davis in the team’s first preseason game but after meeting with coach Frank Vogel and president of basketball operations Larry Bird, George said on Monday afternoon that he would remain in that role, Buckner continues. “We’re going to still stick with it, see how it works,” he told Buckner. That fact that George lobbied to scrap the team’s entire offseason plan after one game is “lunacy,” Indianapolis Star columnist Gregg Doyel opines. But Vogel told Doyel that he’s not worried about George’s reluctance to play there. “Well, he’s going to buy in, so I’m not really sure how to answer that,” Vogel said. “We’re going to work together to figure out the best combination of all these things.”

In other news around the Central Division:

One of the main reasons that the Pacers decided to forge ahead with the purchase of the D-League’s Fort Wayne Mad Ants was the rising salaries of NBA players, Candace Buckner of The Indianapolis Star relays (Twitter links). Team owner Herb Simon said that the Pacers will need young players to go along with the higher paid players on the roster, and that those young players would need development, which purchasing the Mad Ants would help facilitate, Buckner adds.

Here’s more out of the Eastern Conference: 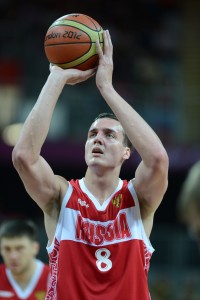 9:42am: The two-year package is worth $2.5MM total, sources tell Marc Stein of ESPN.com (Twitter link).

SEPTEMBER 9TH, 9:35am: The deal is official, the team announced. Kaun will make $1.2MM this season, as Terry Pluto of the Cleveland Plain Dealer wrote recently.

7:38pm: Chris Haynes of Cleveland.com hears that the second year is not a player option, in contrast to what sources told Windhorst (Twitter link).

AUGUST 22ND, 4:44pm: Kaun and the Cavs have reached an agreement on a two-year pact, international journalist David Pick reports (via Twitter).

AUGUST 17TH, 4:09pm: Draft-and-stash center Sasha Kaun appears on his way to the Cavaliers for this season, as a source tells Chris Haynes of Cleveland.com that “it’s only a matter of time” before a deal is done. Kaun and the Cavs had reportedly engaged in talks last month, and GM David Griffin confirmed the team’s interest in bringing the big man aboard for this coming season. Griffin pointed to finances as a concern, and while every dollar the Cavs spend this season will likely entail multiple additional dollars going out in tax penalties, Kaun downplayed any financial hurdles. Still, no deal is imminent, and Kaun, who’s in Cleveland this week to house hunt, among other pursuits, is scheduled to leave town Tuesday, and the sides probably won’t have an agreement in place by then, Haynes writes.

The Cavs can offer no more than the $1.276MM sliver of the mid-level exception they have left over after signing Mo Williams to his deal earlier this summer, and that’s much less than the $2.9MM he had been making for Russia’s CSKA Moscow. Using the balance of that exception on Kaun would also make it virtually impossible for Cleveland to offer a market-rate deal to Cedi Osman, whom the Cavs drafted No. 31 overall this year.

The 30-year-old Kaun, who played collegiately at Kansas, was the 56th overall pick in 2008. The Cavs have seemingly been giving thought to bringing him aboard for the season ahead since at least this past March. Cleveland reportedly had talks with the Nets about trading Kaun’s rights to Brooklyn, but it looks like the Cavs won’t be dealing him away. Cleveland has plenty of room on its roster, as Sunday’s apparent deal with Jared Cunningham gives the team contracts or verbal agreements with only 12 players. Re-signing Tristan Thompson remains the focus for the Cavs, Haynes notes.

Do you think Kaun is the right fit for one of the final roster spots on the Cavs? Leave a comment to tell us.