Former NBA guard Tyrone Wallace has signed with Paris Basketball, according to a team press release. Wallace played six games with the Pelicans last season via a pair of 10-day deals. The 60th pick of the 2016 draft appeared in 92 games for the Clippers from 2017-19 and 14 more for the Hawks during the 2019/20 season.

MARCH 28: The Pelicans have officially announced Alvarado’s new deal, issuing a press release to confirm the move. The team terminated Wallace’s 10-day contract early, as expected, in order to make room on the 15-man roster for Alvarado. 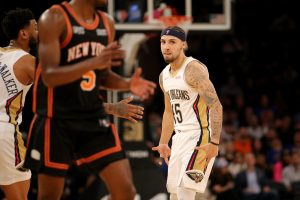 Alvarado’s new contract will include a fourth-year team option, tweets Andrew Lopez of ESPN. That will give the Pelicans the opportunity to turn down that option and make Alvarado a restricted free agent in 2024, if they so choose.

MARCH 27: The Pelicans are converting guard Jose Alvarado from his two-way contract, signing him to a four-year, $6.5MM deal, according to Shams Charania of The Athletic (Twitter link).

The agreement will guarantee Alvarado $3.4MM over the next two years, including $1.5MM on top of the $800K he has already earned this season, according to Charania.

Those numbers appear slightly high if the deal is only worth $6.5MM in total, but it sounds like the rookie guard will at least get two fully guaranteed years followed by two minimum-salary seasons that aren’t fully guaranteed.

Alvarado, 23, signed a two-way deal with New Orleans after going unselected in last year’s draft following four collegiate seasons at Georgia Tech. He has played a key role in the team’s backcourt this season, averaging 6.2 points, 2.8 assists and 1.3 steals in 15.3 minutes per contest entering Sunday. He has also shot 43.5% from the floor and 31.6% from behind-the-arc.

By converting Alvarado, the Pelicans will open up a two-way contract spot. The team owns the 10th-best record in the Western Conference at 31-43, leading the Spurs by one game. Promoting Alvarado to the 15-man roster also makes him eligible to play in the postseason, including the play-in game(s).

New Orleans will dip into its mid-level exception in order to ensure Alvarado makes more than the minimum salary this season and to give him four years. The team had only used $1.7MM of its $9.5MM mid-level in 2021/22 in order to sign Herbert Jones.

The Pelicans currently have a full 15-man roster, but 15th man Tyrone Wallace is on a 10-day contract that only runs through Wednesday, so he’ll likely have that deal terminated a couple days early in order to accommodate Alvarado’s promotion.

12:03pm: The Pelicans have officially signed Wallace to a second 10-day contract, the team confirmed today (via Twitter).

Wallace signed a standard 10-day contract with New Orleans on March 11 after CJ McCollum entered the health and safety protocols. Even after McCollum returned, Wallace saw some action for the club, averaging 4.3 PPG and 1.8 RPG in four appearances (15.8 MPG).

The Pelicans will take on a cap hit of $95,930 for Wallace’s 10-day deal, which will pay him $99,380. If he officially re-signs before Monday’s game, he’ll be under contract through March 30, making him eligible for New Orleans’ next five games.

Once Wallace’s new contract expires, the Pelicans will either have to sign him for the rest of the season or let him walk, assuming the team doesn’t qualify for a hardship exception.

The Pelicans have terminated Alize Johnson‘s 10-day contract a day early, clearing room on the roster to officially sign Tyrone Wallace to a 10-day deal, the team announced today in a press release. Both transactions are official.

Word first broke on Thursday that Wallace would sign a 10-day deal with the Pelicans after CJ McCollum entered the NBA’s health and safety protocols.

Placing McCollum in the protocols gives New Orleans a COVID-related hardship exception, allowing them to add a 16th man. But the team chose to use the final spot on its standard 15-man roster to sign Wallace, which is why Johnson had to be released.

It’s possible that the Pelicans will now use their hardship exception to re-sign Johnson to a new 10-day deal. Since COVID-related hardship signings don’t count toward a player’s limit of two 10-day contracts with the same team, it makes sense that the team would use that hardship exception on a player who has already signed a standard 10-day deal, as ESPN’s Bobby Marks observed (via Twitter).

Johnson has appeared in three games since signing last Wednesday, averaging 3.0 PPG and 4.0 RPG in 8.0 minutes per contest. He’ll be a free agent immediately, without having to pass through waivers.

The news coincides with New Orleans’ announcement on Thursday that CJ McCollum has been placed in the league’s health and safety protocols and will miss at least Friday’s game against Charlotte (Twitter link). Brandon Ingram is out at least seven-to-10 days due to a hamstring strain.

Alize Johnson‘s 10-day contract is set to expire on Friday. However, Wallace could be added under the hardship exception due to McCollum’s status, tweets ESPN’s Bobby Marks.

The Hawks have requested waivers on guard Tyrone Wallace, the team announced in a press release Saturday.

Wallace, 25, was originally claimed off waivers from the Timberwolves by Atlanta on Oct. 23. Since then, the former Clippers guard appeared in 14 games for the Hawks, averaging 2.9 PPG and 1.6 RPG in 11.5 minutes per contest. In parts of three seasons, the California product has appeared in 106 games, averaging 5.2 PPG.

By waiving Wallace, the Hawks opened up a roster spot. As noted by ESPN’s Bobby Marks (Twitter link), the Hawks have $4.8M in room and could direct some of that money toward filling the now-vacant roster spot.

Here are Tuesday’s G League assignments and recalls from across the NBA:

Here are Monday’s assignments and recalls from around the NBA:

Here are Sunday’s assignments and recalls from around the NBA: