The Nets have hired Kenny Atkinson as their new head coach, the team announced via press release and as Adrian Wojnarowski of The Vertical reported minutes before the announcement. Atkinson is currently an assistant for the Hawks. 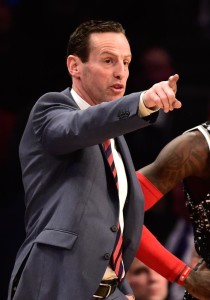 The two sides came to an agreement over the weekend after weeks of discussions, Wojnarowski writes. Atkinson is expected to stay with Atlanta throughout the Hawks’ playoff run, the Nets said. Atkinson is highly regarded as one of the league’s best assistants and has been Mike Budenholzer’s top assistant coach for the past two years. Atkinson has been with the Hawks for a total of four seasons.

Prior to joining Atlanta, Atkinson was an assistant coach for four seasons with the Knicks (2008-2012), helping the team reach the postseason in 2011 and 2012. Atkinson also spent one season as the director of player development for the Rockets (2007-2008).

“We are thrilled to announce Kenny Atkinson as our new head coach and to welcome him and his family to Brooklyn,” said Nets GM Sean Marks in a press release. “Kenny’s years of NBA coaching experience working under successful head coaches such as Mike Budenholzer and Mike D’Antoni have provided him with the foundation and experience we were looking for in a head coach. We believe that Kenny’s core principles, leadership, communication skills and exceptional background in player development make him an ideal fit for the culture we are building in Brooklyn.”

It is worth mentioning that Marks and Atkinson share the same agent. Tony Brown was Brooklyn’s head coach on an interim basis, but he never seemed like a front-runner to secure the job beyond this past season and his future with the team is not yet clear. The Nets fired Lionel Hollins in early January on the same day they reassigned former GM Billy King. Brooklyn finished 21-61 this season.

Several high-profile names were linked to the Nets’ coaching job. Brett Brown, who reportedly isn’t assured of keeping his job with the Sixers, along with Luke Walton, Mark Jackson, Jeff Van Gundy, Vinny Del Negro and Bucks assistant Sean Sweeney, were all reportedly in the mix for the Nets. Spurs assistant Ime Udoka was believed to be a leading candidate.

The decision to go with Atkinson is not a splashy one, and that is a different than moves the Nets have made in the past, as Tim Bontemps of the Washington Post tweets. Several members of the media, such as Frank Isola of the New York Daily News and Howard Beck of Bleacher Report, commended the Nets on their hire (Twitter links). Both scribes pointed to Atkinson’s work with Jeremy Lin while the coach and player were in New York together.

Atkinson is the first of several new coaching hires to take place across the league in the coming months. The Wolves dismissed interim coach Sam Mitchell, the Wizards fired Randy Wittman and the Kings parted ways with George Karl. The fate of Rockets interim coach J.B. Bickerstaff has yet to be decided. The Suns still need to make a decision regarding Earl Watson. The fate of Lakers coach Byron Scott remains up in the air as the team holds an option on his contract for next season. Knicks interim coach Kurt Rambis is expected to be interviewed for New York’s head coaching slot.