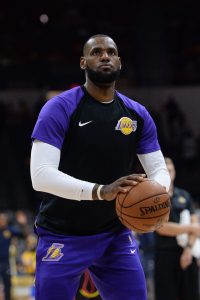 USA Basketball announced a preliminary list of 44 players who will be considered for spots on the Summer Olympics team. The Lakers led the way with five selections in LeBron James, Anthony Davis, Dwight Howard, Kyle Kuzma and JaVale McGee.

The late Kobe Bryant was among eight finalists announced for enshrinement into the Basketball Hall of Fame. Perennial All-Stars Tim Duncan and Kevin Garnett are also eligible for the first time.

Already sporting the league’s best record, the Bucks added some depth by signing Marvin Williams, who reached a buyout agreement with the Hornets. Milwaukee waived Dragan Bender to make room for Williams.

Darren Collison, who had been pondering an NBA comeback with the Lakers or Clippers, decided to sit out the rest of the season. The former Pacers guard may reconsider his plans this summer.

The Trail Blazers had a setback to their playoff hopes when Damian Lillard suffered a groin injury that will sideline him for one to two weeks. Lillard was replaced in the All-Star Game and Three-Point Contest by Suns guard Devin Booker.