NOVEMBER 23: Rondo has officially signed his contract with the Hawks, the team announced in a press release. 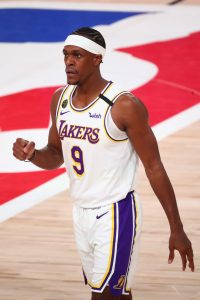 “Rajon is an intense competitor, a proven winner and a true student of the game,” Hawks general manager Travis Schlenk said in a statement. “His resume and experience speak for themselves. We’re excited to add him to our group.”

The Lakers and Clippers were both reportedly interested in signing Rondo as a free agent, but he’ll return to the Eastern Conference with a Hawks team that values his leadership and locker room presence and will be pushing hard to make it back to the playoffs in 2020/21.

Rondo is the third veteran free agent that has agreed to sign with Atlanta since free agency opened nearly 24 hours ago, joining Danilo Gallinari and Kris Dunn. As Adrian Wojnarowski of ESPN notes (via Twitter), the Hawks entered free agency determined to improve defensively in the backcourt, and will do so by adding Dunn and Rondo to the mix.

Rondo played an important role in helping the Lakers capture the NBA title in Orlando this past season. He suffered a fractured right thumb shortly after arriving at the Disney World complex, but was able to return in time for the playoffs, averaging 8.9 points, 4.3 rebounds and 6.6 assists off the bench in 16 games. He turned down a minimum-salary player option in order to reach free agency.

Frank Isola of SiriusXM NBA Radio first reported earlier in the week that the Hawks were expected to offer two years and $15MM to Rondo. As Bobby Marks of ESPN tweets, the club still projects to have upwards of $20MM in cap room available, so another splash – such as a potential offer sheet for Bogdan Bogdanovic – remains possible.