The Sixers entered this season still smarting from their sweep at the hands of the Celtics in the first round of the 2020 playoffs and looking to regain their status as a Finals contender. 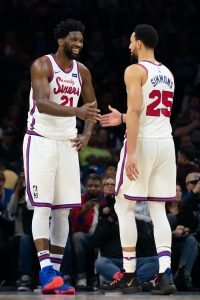 And for much of the year, it looked like they were on track to do just that. With a rebalanced roster and Joel Embiid playing at an MVP level, the Sixers finished the year with a 49-23 record, one game ahead of the Nets for the top seed in the East.

Though Ben Simmons had a disappointing year, averaging the fewest points, rebounds, and assists per game of his career, Tobias Harris looked rejuvenated under head coach Doc Rivers, Seth Curry finished the year sixth in the NBA in three-point percentage, and Dwight Howard and young guards Shake Milton and Tyrese Maxey shined in their limited roles.

In the first round of the 2021 playoffs, the Sixers comfortably dispatched the Wizards in five games, but Embiid suffered a meniscus tear in Game 4. While he was able to keep up his dominant level of play in the Sixers’ seven-game series against the Hawks, the team’s supporting cast was ultimately unable to provide enough to best an underdog Atlanta squad. For the second year in a row, the team was left with more questions than answers heading into the offseason following a disappointing playoff performance.

All questions regarding the Sixers offseason begin with Simmons.

Simmons didn’t just take a step back during the regular season — his lack of aggression against the Hawks in the playoffs was so notable that both Embiid and Rivers addressed it in comments to the media following the series’ end. While team president Daryl Morey spoke publicly of his faith in Simmons to address his unwillingness to shoot and to continue to be an important part of the team, reports have since indicated that the Sixers have opened up trade dialogues and are hoping to get a star in return for the 25-year-old point guard.

Despite his flaws, Simmons is a huge part of how the 76ers function, and the possibility of trading him away creates a major question mark about what the team will look like next year. Luckily, the Sixers are no strangers to offseason overhauls. Should Morey manage to trade Simmons in a blockbuster deal, it will be the fourth season in a row in which one of the team’s highest-paid players was either added or subtracted. From acquiring – then losing – Jimmy Butler to signing Al Horford to a $100+MM contract to dumping Horford for Danny Green, the 76ers have gotten into the habit of shaking up the roster on an annual basis.

The Sixers will also have to address Green’s unrestricted free agency. Although he only scored seven points per game during the playoffs, the threat of Green’s shooting and his versatile defense was important, especially given Curry’s limitations on the defensive end. And with the team paying maximum contracts to Embiid, Harris, and Simmons (or, potentially, the centerpiece of a Simmons trade), there will be very little money to replace Green on the open market.

The team will also need to rebalance its roster, as promising rookie Paul Reed represents the only bench depth at the forward/center spot. Furkan Korkmaz, the 6’7″ scoring specialist, will hit unrestricted free agency this summer, meaning Maxey, Milton, Isaiah Joe and Matisse Thybulle are the only bench players on guaranteed contracts, and all are combo guards.

George Hill, who came over in a midseason deal with the Thunder, has a partially-guaranteed deal and was largely ineffective in the series against the Hawks, though he still provided his typical brand of stout defense. With so many guards on the roster, the Sixers may decide not to guarantee the rest of his $10MM deal.

One player of interest will be Howard. The three-time Defensive Player of the Year was great for the Sixers off the bench and filled in when needed for Embiid. Philadelphia would undoubtedly like to keep him around, but it remains to be seen if Howard will be able to score one last slightly bigger payday elsewhere after two solid years of being a backup center.

Curry could potentially offer a point of flexibility. Curry was massively important to the Sixers, both in the playoffs and the regular season. But should Morey move Simmons for a scoring guard (such as CJ McCollum), it’s possible the club could view Curry as redundant and – given his bargain contract – try to move him for another wing, inserting defensive specialist Thybulle into the starting lineup to complement the newly-acquired guard.

Whatever happens, one thing is clear: given the team’s high expectations, roster holes, and lingering trade rumors, the Sixers we see on opening night of the 2020/21 season could look very different from the group we last saw walking off the floor against the Hawks.

If they were to waive Hill, the Sixers would have $120MM+ in commitments for nine roster spots, giving the team the flexibility to remain below the tax line and even use the full mid-level exception.

However, if Philadelphia either hangs onto Hill or re-signs Green, that flexibility below the tax line will mostly disappear and the club would be limited to the taxpayer mid-level. I lean toward the front office taking that approach for now, but it’s hardly set in stone — the 76ers’ financial outlook could also change if they’re able to trim team salary at all on the trade market.

Salary and cap information from Basketball Insiders, RealGM, and ESPN was used in the creation of this post. Luke Adams contributed to this post.