AUGUST 6: Conley’s deal with the Jazz is now official, the team announced in a press release. General manager Justin Zanik said in a statement that the team is “excited” to bring Conley back and that he has made a “profound impact both on and off the court” during his time in Utah. 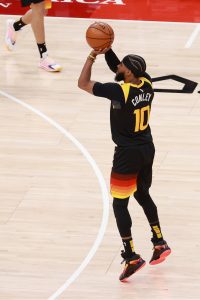 AUGUST 2: The Jazz have reached an agreement with free agent point guard Mike Conley on a three-year contract, Shams Charania of The Athletic tweets.

According to Charania, the deal is worth $68MM. Agents Steve Heumann and Jess Holtz of CAA Basketball told ESPN’s Adrian Wojnarowski the contract is worth $72.5MM (Twitter link), suggesting that it could include incentives or bonuses.

A report surfaced over the weekend that Jazz were on track to lock up the veteran on a three-year deal. Bringing him back was Utah’s top offseason priority.

As a team with luxury tax concerns, the Jazz needed to shed salary to improve that situation and retain Conley. Utah made a deal to dump a contract last week, having traded Derrick Favors to Oklahoma City.

Conley was forced to miss games during the postseason due to a hamstring injury, which led to a disappointing finish for a team that had the league’s best regular season record.