5:49pm: Shamet’s extension is official, according to NBA.com’s transactions log. The deal will include a team option in year four, says Michael Scotto of HoopsHype (Twitter link). 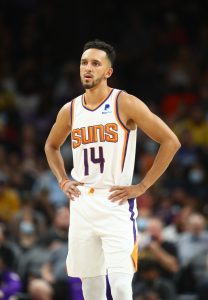 The deal is almost identical to what a four-year deal using the full mid-level exception is projected to look like in 2022/23.

Shamet has yet to appear in a regular season game for Phoenix, having been acquired from Brooklyn in an offseason deal. However, as Wojnarowski notes (via Twitter), head coach Monty Williams pushed for that trade and is planning on having Shamet play a big role for the Suns.

The 24-year-old has bounced around the NBA since entering the league as the 26th overall pick, having already spent time with the Sixers, Clippers, and Nets. However, he has been considered a positive asset each time he has been traded — the Suns gave up Jevon Carter and the No. 29 pick for him this summer.

Even though the Suns were said to be high on Shamet, it’s still a little surprising that the team completed rookie scale extensions with two players this offseason and former No. 1 overall pick Deandre Ayton wasn’t one of them. Mikal Bridges also received a four-year deal from Phoenix, but extension negotiations with Ayton stalled and ended.

Outside of Ayton, the Suns now have their entire core locked up for multiple seasons. Devin Booker is under contract for the next three years, while Chris Paul‘s contract covers four seasons.