“We are pleased that Zach remains with the Bulls,” executive VP Arturas Karnisovas said in the statement. “His work ethic and character have helped him to become one of the top players in the NBA.”

JULY 1: The Bulls and guard Zach LaVine are in agreement on a five-year, maximum-salary contract that will include a fifth-year player option, agent Rich Paul tells Shams Charania of The Athletic (Twitter link). 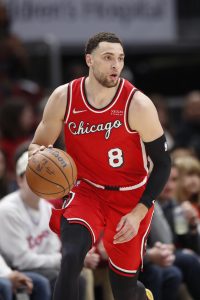 When he was a restricted free agent in 2018, LaVine signed a four-year, $78MM offer sheet with the Kings, which Chicago matched. He significantly outplayed that deal and has long been earmarked for a maximum-salary contract this offseason. His health problems this past season raised some questions about whether that max deal would still be on the table, but the knee injury is reportedly not considered a long-term concern.

LaVine was linked to a number of rival suitors earlier in the offseason and didn’t agree to terms with the Bulls right when free agency opened on Thursday, but was always most likely to remain in Chicago — especially with the team willing to offer a fifth year that other teams couldn’t. The Bulls sweetened the pot further by making that fifth year a player option. That option, which applies to the 2026/27 season, will be worth $48,967,380.

LaVine, who was the No. 2 free agent on our top-50 list, has now received the second-largest commitment among free agents this offseason. Our No. 1 free agent, Bradley Beal, also agreed to a five-year, maximum-salary contract, but Beal is eligible for a higher level of max because he more years of NBA service than LaVine.

The Bulls’ projected 2022/23 team salary remains below the tax line, but the team would likely cross into the tax if it uses its full mid-level exception.