AUGUST 18: The Lakers have officially signed James to an extension, the team announced (Twitter link via Marc Stein). 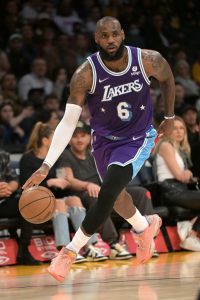 It’ll be a new two-year, maximum-salary deal that includes a second-year player option, per Wojnarowski. That means James is now under contract with the Lakers through at least the 2023/24 season, with an option on ’24/25. The agreement also includes a 15% trade kicker, Woj adds.

The value of James’ extension could increase further if the NBA salary cap for ’23/24 comes in higher than anticipated. The cap is currently projected to be $133MM, but if it ends up exceeding $133,425,000, LeBron’s starting salary on the extension would instead be worth 35% of the cap.

James became eligible for a new two-year extension on August 4. He was ineligible to sign a deal longer than that due to the NBA’s Over-38 rule.

Despite his new eligibility, there was a sense that James wouldn’t rush into a new deal right away. The four-time MVP would have been able to retain leverage and perhaps wield more influence on the Lakers’ roster moves by holding off on that commitment. Taking that route would also have given LeBron a chance to assess the team’s roster additions – and new head coach Darvin Ham – during the 2022/23 season.

However, it appears that James was comfortable renewing his commitment to the Lakers despite last season’s disappointing 33-49 showing and lingering questions about the roster. The new deal will give LeBron the opportunity to become an unrestricted free agent at age 39, at which point he’s expected to try to team up with his son Bronny James, who would be draft-eligible no earlier than 2024.

While the Lakers almost certainly wouldn’t have considered moving him anyway, James’ extension will make him ineligible to be traded during the 2022/23 season — he can’t be dealt for six months after signing the contract, since it exceeds the NBA’s “extend-and-trade” restrictions.

As Bobby Marks of ESPN (Insider link) previously noted, the Lakers’ potential 2023 cap room won’t be affected in any real way by James’ new extension, since his free agent cap hold would have been equivalent to his extension salary. Los Angeles projects to have over $20MM in room next summer when several contracts – including Russell Westbrook‘s – expire, which will open up some options for the team but won’t be enough for another maximum-salary player.

James’ new deal makes him the highest-paid player in NBA history in terms of total earnings, at least for the time being, Marks tweets. Assuming LeBron’s deal ends up being worth $97.1MM, he’ll be at $532MM in career earnings, surpassing Kevin Durant‘s $508MM.