Could the “Birdman” be flying back into the NBA? Chris Andersen, who spent 16 years in the league, spoke with reporters at the Nuggets game last night and emphasized that he hasn’t officially retired from basketball, tweets Duvalier Johnson of Mile High Sports.

Andersen, who played in the BIG3 League over the summer, said he could bring veteran leadership to a team and provide help on defense and in the locker room.

The 40-year-old hasn’t played in the NBA since the 2016/17 season, when he got into 12 games with the Cavaliers. In February of 2017, he was traded to the Hornets, who immediately waived him.

Andersen, who served as a backup center with the Heat during the LeBron James era, had his best years with Denver, spending seven seasons there. He was never a big scorer, but was a fan favorite as an intense competitor with an outlandish appearance and personality. He saluted the Nuggets’ faithful during Tuesday’s brief session with reporters.

“All the years, and all the games that there was a snow storm or it was -20 degrees outside or really cold, the fans always showed up,” Andersen told Jeff Bailey of The Denver Post. “They always showed up, and those were always the greatest memories because they were the ones that influenced me to play harder and faster all the way to the end.”

It wasn’t long ago that Chris Andersen was suiting up for the NBA’s defending champions — he appeared in his last NBA game in December 2016 for the Cavaliers. Less than a year and a half later, however, having not played for an NBA team this season, Andersen is eyeing a move to the BIG3.

While he hasn’t officially announced his retirement as an NBA player, Andersen’s move to the BIG3 may signal that one last NBA run isn’t in the cards for the veteran big man.

1:18pm: The Hornets issued a press release confirming their acquisition of Andersen, and announcing that they’ve already waived the injured center.

11:18am: The second-round pick Cleveland gets in the deal is top-55 protected for 2017, a league source tells Dave McMenamin of ESPN.com (Twitter link). Based on the Hornets’ current record, there’s virtually zero chance of that pick changing hands, as expected.

11:04am: The Cavaliers have opened up a spot on their 15-man roster by making a trade with the Hornets, the team announced today in a press release. According to the Cavs, Cleveland is sending injured big man Chris Andersen and cash to Charlotte in exchange for a protected second-round pick. 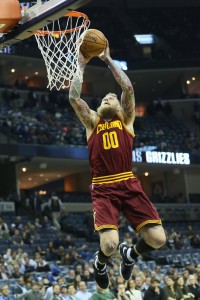 Although the Cavs are receiving a second-round pick in the swap, that selection will likely be a heavily-protected pick that never actually changes hands. Andersen has no value this season, since he’s out for the year with a torn ACL, so Charlotte is doing the Cavs a favor by taking him off their hands. In return, the Hornets will likely get more than enough cash to cover Andersen’s remaining salary, so they’ll come out ahead in the transaction.

While Cleveland will probably never receive that protected second-round pick, the team had been motivated to move Andersen. By sending the Birdman’s contract elsewhere, the Cavs will ensure that they don’t have to pay an extra tax charge for him at season’s end. The club is currently so far into tax territory that every dollar spent results in an extra $2.50 tax charge — that means Andersen’s $980K minimum salary would have cost more than $2.4MM in tax payments. By trading him, the Cavs reduce their tax bill and create an opportunity to add someone new to fill that newly-opened 15th roster spot in the coming days or weeks.

Cleveland had previously sent out $2.75MM in cash in a few separate trades, and teams are limited to $3.5MM in outgoing cash for the 2016/17 league year. It wouldn’t be a surprise if the Cavs sent out the rest of their available trade money ($750K) in this deal, though the specifics aren’t yet known. The Cavs will also create a modest trade exception in the swap, worth Andersen’s cap hit ($980,431). It will expire a year from today.

Charlotte, meanwhile, had an open roster spot after Ray McCallum and Mike Tobey saw their 10-day contracts expire overnight. McCallum already re-signed with the team, but Tobey hasn’t formally inked a new deal yet. The Hornets will likely waive Andersen shortly in order to make room to re-sign Tobey.

The Cavaliers have been “aggressively” exploring ways to clear the contract of Chris Andersen from their books, according to Steve Kyler of Basketball Insiders. Andersen, who is out for the season with a torn ACL, is on a minimum salary deal, but moving him would allow Cleveland to open up a roster spot and create additional savings on the team’s projected tax bill.

Although the Cavaliers have been mentioned in some intriguing trade rumors involving star players like Carmelo Anthony, Cleveland is more focused on bolstering its bench. According to Kyler, the Cavs are prioritizing adding a point guard and a big man for depth purposes.

Here are a few more items of interest from around the NBA, via Kyler’s report:

Acquiring a veteran backup point guard will be the next move the Cavaliers make, but there could be others in store, Joe Vardon of the Cleveland Plain Dealer speculates in his latest mailbag column. The team doesn’t trust that rookie Kay Felder can run the offense and defend for 8-12 minutes in postseason games as Kyrie Irving‘s backup, pushing the need for a backup point to the top of the wish list, Vardon continues. The club would also like to add another big man and perhaps an additional wing player, Vardon continues. GM David Griffin could open up roster spots by dumping the contract of injured Chris Andersen and moving a bench player like Jordan McRae for a draft pick, Vardon adds.

In other developments around the Central Division:

The Cavaliers will be without backup big man Chris Andersen for the remainder of the season, says Yahoo Sports’ Chris Mannix. The 38-year-old tore the ACL in his right knee jumping for a rebound in practice and will undergo surgery. According to an official Cavs update, the prognosis was confirmed by a team physician.

What’s next for the defending champions remains to be seen. The 15-year-veteran’s minimum salary is guaranteed, so the team would have to eat it if Andersen is waived. As a result, Brian Windhorst of ESPN speculates that while the Cavs would be unlikely to outright release the Birdman for tax reasons, they could instead explore trade options. Already taking up a spot on the roster is retired veteran Mo Williams, whose contract could be dealt in a package for a suitable replacement.

In 12 games with Cleveland this season, Andersen has averaged just 2.3 points and 2.6 rebounds per game, playing more than 10 minutes only four times on the year. However, his veteran leadership and ability to match up against bulky forwards and centers will be missed.

JULY 22: The Cavaliers have officially signed Andersen, the team announced today in a press release.

JULY 15: After finalizing a trade to send Sasha Kaun to the Sixers, the Cavaliers have agreed to terms on a one-year deal with Andersen, reports Adrian Wojnarowski of The Vertical (via Twitter). It’s a minimum-salary pact, tweets Dave McMenamin of ESPN.

JULY 8: The Cavaliers are nearing an agreement with veteran NBA big man and all-around entertaining locker room presence, Chris Andersen, Chris Haynes of The Northeast Ohio Media Group relays (on Twitter). Cleveland head coach Tyronn Lue noted during an appearance on NBA TV that the team was in the process of signing Andersen.

If Andersen does indeed join the defending NBA champs, he’ll reunite with former Heat teammate LeBron James. The big man will likely be signing with the team for the veteran’s minimum, though that is merely my speculation. Andersen should provide additional depth, energy and defense off the bench for the Cavs.

Andersen was dealt to the Grizzlies during the season and appeared in 20 games for Memphis after his arrival. He averaged 4.6 points, 4.5 rebounds and 0.5 assists in 18.3 minutes per outing while shooting .548/.222/.688 from the field.

5:52pm: The Sixers intend to waive Kaun, according to Wojnarowski (via Twitter). As I noted below, Cleveland sent Philadelphia enough cash to make the move worth the 76ers’ trouble, per Wojnarowski.

5:42pm: The Sixers and Cavaliers have completed a trade, according to a press release issued by the 76ers. The deal sends center Sasha Kaun and cash considerations to Philadelphia in exchange for the rights to Chu Chu Maduabum. Adrian Wojnarowski of The Vertical tweets that the move clears the way for the Cavs to finalize their signing of Chris Andersen.

Kaun, 31, played his college ball at Kansas and was selected with the 56th overall pick in the 2008 NBA draft. However, as a draft-and-stash prospect, it took him seven years to formally join an NBA roster. Kaun agreed to a two-year contract with the Cavaliers last summer, and still has one season remaining on that deal — he’s owed $1,333,420 in 2016/17.

In his lone season in Cleveland, Kaun didn’t see much action, averaging only 3.8 minutes in 25 games. While it’s possible he’ll see a larger role with the Sixers, Philadelphia has a logjam in its frontcourt at the moment, so this looks like a salary dump for Cleveland. I imagine the Cavs are sending the Sixers more than enough money to cover Kaun’s salary.

Meanwhile, the Cavs didn’t open up any cap room by moving Kaun, since cap holds for LeBron James and others ensure the team is still well over the cap. Wojnarowski’s suggestion that the move opens the door for the club to add Andersen is probably more about clearing a roster spot, and perhaps limiting the team’s tax bill.

Former Pacers coach Frank Vogel will be part of a long list of candidates to replace Dave Joerger, according to Ronald Tillery of The Commercial Appeal. Tillery expects the Grizzlies to reach out to veteran coaches David Blatt, Brian Shaw, Mark Jackson and Jeff Van Gundy. GM Chris Wallace promised a “thoughtful and comprehensive” process, adding that there is no rush to find a replacement. He plans to consider college coaches as well as NBA assistants. “We don’t have a guy,” Wallace said. “We’ll talk to people and see how it goes. It’s not about dealing from a pre-existing category. It’s about finding the right guy. We’re very much in the preliminary stages.” Tillery writes that “reshaping” the team, which the front office didn’t believe Joerger was willing to do, will be among the responsibilities for the next coach.

There’s more out of Memphis:

Many executives believe Dwight Howard‘s slumping productivity and recent history of injuries will keep him from receiving the max in free agency this summer, but the Rockets still see him as preferable to Al Horford or Ryan Anderson, according to USA Today’s Sam Amick. Howard’s agent Dan Fegan sent word to the Bucks, Hornets and Hawks, among others, that Howard isn’t anxious to take any discounts this summer, and he didn’t indicate a willingness to opt in and push back his free agency until 2017, Amick notes, which reportedly turned off the Bucks, at least, if not other suitors. Adding to the confusion before the deadline was that Howard was giving serious thought to changing agents, Amick writes. The USA Today scribe indicates that Howard’s uncertainty regarding Fegan is in the past, though that’s not entirely clear. See more from the Southwest Division: