7:40pm: The Lakers have officially signed both Ryan and Bacon, the team tweets.

7:03am: The Lakers intend to sign free agent swingman Matt Ryan to a non-guaranteed contract, reports Shams Charania of The Athletic (Twitter link). According to Charania, the team is also working toward an agreement on a camp deal with free agent wing Dwayne Bacon.

Ryan, 25, signed a two-way contract with the Celtics in February and finished the season with the team. While he only appeared in a single regular season game for Boston, the former Chattanooga sharpshooter had a big year at the G League level, averaging 19.4 PPG on .469/.413/.860 shooting in 30 total regular season games (33.5 MPG) for the Grand Rapids Gold and Maine Celtics.

Ryan also made a strong impression at the Las Vegas Summer League this July, putting up 19.0 PPG on .550/.526/1.000 shooting in two appearances (22.9 MPG) for Boston before suffering an ankle sprain.

As for Bacon, the 2017 second-round pick has appeared in 207 regular season games for Charlotte and Orlando since making his debut five years ago, but didn’t play in the NBA last season after being waived by the Knicks in October. Bacon signed with AS Monaco shortly after being cut by New York and competed in France’s top basketball league in 2021/22.

The Lakers currently have two openings on their 20-man training camp roster, so they could add Ryan and Bacon without making any cuts.

SEPTEMBER 18: Thomas disputed the claim that he participated in the Lakers’ workout, posting a tweet stating that he didn’t work out for the club.

SEPTEMBER 17: Isaiah Thomas was among several free agents who worked out recently for the Lakers, tweets Michael Scotto of HoopsHype. The 33-year-old guard is looking for his next team after finishing last season with the Hornets.

If Thomas earns a roster spot, it would mark his third stint with the organization. He signed a 10-day contract with L.A. under the hardship provision last December, appearing in four games and averaging 9.3 PPG in 25.3 minutes per night. Thomas also played 17 games with the Lakers during the 2017/18 season.

A report in July indicated that the Hornets still had some interest in bringing back Thomas, who signed a rest-of-the-season contract after joining the team on a pair of 10-day deals in March. Charlotte currently has two openings on its offseason roster.

L.A. currently has one opening on its 20-man roster, but it’s a long shot for any of these players to be with the team once the season begins. Luxury tax penalties would cost the Lakers about $7MM to fill their final roster spot, so they will likely operate with 14 players for most of the season. Friday’s signing of Dennis Schröder gives them 12 fully guaranteed contracts, while Austin Reaves and Wenyen Gabriel are on non-guaranteed deals.

Dwayne Bacon Signs With AS Monaco

Veteran shooting guard Dwayne Bacon will continue his playing career outside of the NBA, having signed with AS Monaco Basket, the team announced today in a press release.

Bacon, 26, was selected with the 40th overall pick in the 2017 draft and spent his first three seasons in Charlotte before joining the Magic for the 2020/21 season. He appeared in all 72 of Orlando’s games last season, establishing new career highs in PPG (10.9), RPG (3.1), and MPG (25.7), though he still struggled to score efficiently, making just 40.2% of his field goal attempts, including 28.5% from beyond the arc.

In four total NBA seasons, Bacon has averaged 7.3 PPG and 2.6 RPG in 207 games (19.4 MPG). He joined the Knicks for training camp this offseason, but was beaten out by Wayne Selden for the 15th spot on the team’s regular season roster and was waived at the end of the preseason.

Bacon will join former NBAers Mike James, Donatas Motiejunas, and Donta Hall on AS Monaco’s roster. The team, which competes in France’s top basketball league, won the EuroCup title in 2020/21 and is playing in the EuroLeague for the first time in ’21/22.

The Knicks are waiving guard Dwayne Bacon, Fred Katz of The Athletic tweets.

Bacon, who was on an Exhibit 10 deal, was considered a strong candidate for the last roster spot on a team with 14 guaranteed deals. This development could improve the chances of Wayne Selden making the opening-night roster.

Kyrie Irving rejoined the Nets for a light workout at the Brooklyn Park Bridge earlier this afternoon, writes Zach Braziller of the New York Post.

Braziller notes that before the public event, Irving posted a tweet that seemed to indicate he still might be hesitant to get vaccinated against COVID-19. Irving received a large ovation from the crowd, and new teammate Patty Mills seems glad to have him back, Braziller relays.

“I think we’re taking it one step at a time, so to have everyone here outside at this [event] is pretty special,” Mills said.

Braziller opines that this represents minor progress, but Irving’s vaccination status is still front and center for the team.

The Knicks are open to signing Mitchell Robinson to a contract extension before the 2021/22 season begins, “as long as it’s not crazy,” a source tells Marc Berman of The New York Post. Robinson, who is one of the Knicks’ longest-tenured players, is entering a contract year and will be an unrestricted free agent in 2022 if he doesn’t sign a new deal before then.

As Berman notes, there are reasons both sides may want to wait on an extension. Robinson is coming off a season in which he suffered a broken hand and broken foot, so the Knicks might want to see him at full health again before making a major investment. The team’s multiyear commitment to Nerlens Noel in free agency also reduces the urgency to lock up Robinson.

Robinson, meanwhile, could significantly boost his stock in the coming months if he shows he’s back to 100% health and continues to improve on both ends of the court. For now, Berman says, league insiders consider the big man’s value to be around the mid-level or slightly higher. Berman suggests $44MM over four years could be a fair price for both sides.

Pistons second-round pick Luka Garza earned a two-way contract with strong performances in the Las Vegas summer league. Garza dropped 25 pounds since the college season ended and noticed a difference in his mobility, Keith Langlois of Pistons.com writes. “I think it definitely improves my ability to move in multiple ways,” Garza said. “But, for me, I’m not comfortable. I want to continue to work on that and get better and better and better. The better I am on that end, the better my career is going to go.”

AUGUST 19: The Knicks have officially signed Bacon, according to RealGM’s transactions log. It’s a one-year, minimum-salary contract, and I’d be surprised if it’s fully guaranteed. 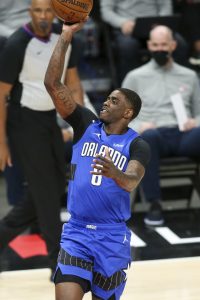 AUGUST 9: After being waived by the Magic on Sunday, free agent shooting guard Dwayne Bacon appears to have lined up a new home elsewhere in the Eastern Conference. The Knicks are set to sign Bacon on a new deal, reports Tim Bontemps of ESPN (via Twitter).

As Bobby Marks of ESPN (Twitter link) notes, the Knicks’ roster currently projects to include 14 guaranteed deals, one non-guaranteed contract (Argentinian point guard Luca Vildoza), and one player on a two-way contract (rookie forward Jericho Sims). It’s unclear whether Bacon will receive a full or partial guarantee on his new deal.

Of course, before he can sign with the Knicks, Bacon will need to clear waivers. That will happen on Tuesday, assuming he goes unclaimed.

Veteran shooting guard Dwayne Bacon has been waived by the Magic, the team announced today in a press release (Twitter link).

Bacon had joined Orlando on a two-year minimum deal during the 2020 offseason, but his $1,824,003 salary for the 2021/22 season was not yet guaranteed, so Orlando won’t carry any dead money as a result of the move.

The 25-year-old was selected with the No. 40 pick in the 2017 draft out of FSU, and had spent his prior three seasons in the league with the Hornets, also moonlighting with Charlotte’s NBA G League affiliate, the Greensboro Swarm, during that time.

Bacon’s proven reliability during a compressed season and his positional fluidity could make him an appealing player for a playoff club looking to take a minimum-salary or partially-guaranteed contract flyer on a young wing with remaining upside.