Although the Cavaliers remain on the lookout for an upgrade on the wing, there’s a “growing sense” that they don’t love the options available to them on the trade market and would be comfortable standing pat if no deal comes to fruition, writes Chris Fedor of Cleveland.com (subscriber link).

Isaac Okoro has been impressive since becoming the full-time starter at small forward, averaging 9.2 points per game with a .500 3PT% in his last 18 games. Given how strong a defender Okoro is, he may be the Cavaliers’ best option at that spot even if his offensive game doesn’t continue to develop, according to Fedor.

Still, Fedor runs through several of the options available to Cleveland, identifying Malik Beasley, Tim Hardaway Jr., Doug McDermott, Luke Kennard, Royce O’Neale, and Hamidou Diallo as some potential players of interest, though most of them come with some caveats.

Sources tell Cleveland.com that there are mixed feelings within the Cavaliers’ front office about Knicks forward Cam Reddish, who is considered more of a fall-back option. Reddish has talent and untapped potential, but he’ll be a free agent in a matter of months and isn’t a clear upgrade on what the team already has at small forward, Fedor explains.

Fedor adds that Trail Blazers forward Josh Hart is one player who is high on the Cavaliers’ list of targets, writing that he has “plenty of fans” within the organization and that Cleveland explored a possible sign-and-trade for him two years ago before pivoting to Lauri Markkanen.

There’s a belief around the NBA that Hart will be on the move this week, according to Fedor, who notes that the Blazer has a similar skill set to Okoro but would bring a level of experience and consistency that the former No. 5 overall pick lacks.

Here’s more on the Cavs:

The NBA has suspended two Pistons players and nine Magic players for their roles in an altercation during the second quarter of Wednesday’s game, the league has announced (Twitter link).

Pistons guard Killian Hayes was given the harshest punishment, a three-game suspension without pay. Magic center Moritz Wagner has been suspended for two games, while Detroit guard Hamidou Diallo was also dinged for a one-game suspension. Both Hayes and Diallo will be held out of the team’s road game against the Bulls Friday.

Hayes, Wagner and Diallo were all ejected from the game Wednesday night, which Detroit won 121-101, for their roles in the on-court confrontation that began when Wagner hip-checked Hayes out of bounds into the Pistons’ bench while the two were scrambling for a loose ball. Diallo subsequently shoved Wagner in the back, but Hayes then escalated the conflict when he punched Wagner in the back of the head. Wagner appeared to lose consciousness after the hit. Several Magic players left the bench to support Wagner and all have been penalized for doing so.

The NBA’s press release indicates that the absences of the Magic players will be staggered to ensure the team has enough available bodies for its ensuing two contests. Anthony, Gary Harris, Hampton, Bamba, and Carter will miss Orlando’s next game on Friday against the Wizards. Wagner will also begin his two-game suspension on Friday. The others will miss the club’s January 4 matchup with the Thunder. 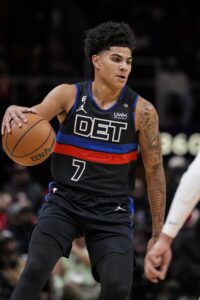 As shown in the video and multiple replays courtesy of Bally Sports Orlando (Twitter video link), Wagner initiated the altercation by hip-checking Hayes into the Pistons’ bench, which obviously riled everyone nearby. Diallo then caught up and shoved Wagner in the back with a forearm, followed by Hayes punching/forearming Wagner in the back of the head, which appeared to cause Wagner to lose consciousness.

Officially, Wagner and Hayes were both given flagrant 2 fouls, while Diallo received two technical fouls.

Hayes is almost certain to face a pretty significant suspension for his part in the altercation, as ESPN’s Bobby Marks notes (via Twitter). Several Magic players left their bench area to join the fray, and while nothing really transpired beyond a few mild shoves (it looked like most were just trying to get Wagner out), leaving the bench typically draws an automatic suspension by the NBA, per Vincent Goodwill of Yahoo Sports (Twitter link).

Since so many of Orlando’s players left the bench, it seems probable that the suspensions will be staggered so the Magic will still have eight available players, the minimum required to play a game, Goodwill adds (via Twitter). The suspensions are likely to be handed down sometime on Thursday.

Both teams’ next games are on Friday; the Pistons play in Chicago, while the Magic are home against the Wizards.

Marvin Bagley III‘s knee injury is the latest mishap for a Pistons team that will start the season with a diminished frontcourt, writes Mike Curtis of The Detroit News.

Nerlens Noel, who was acquired from the Knicks in an offseason trade, is reconditioning after plantar fasciitis and hasn’t played during the preseason. Rookie center Jalen Duren hurt his shoulder last week, but was able to return Tuesday. Newly acquired Bojan Bogdanovic sat out Tuesday’s game with a strained calf, and Alec Burks, Kevin Knox and Hamidou Diallo are all dealing with injuries as well.

“It’s part of the NBA,” coach Dwane Casey said. “That’s one reason (general manager Troy Weaver) has done a good job of bringing multiple guys in. Unfortunately, the multiple guys are (sitting out, injured) behind the bench. I think it’s a freak thing. I do know that some of the guys that were behind the bench — Kevin, (Diallo) — if it was a regular season game, they’d be able to go. That’s refreshing to know that.”

Before the Pistons can take a leap in the win column and contend for the postseason, the team will need its young role players to improve in their development. Mike Curtis of The Detroit News identifies power forward Marvin Bagley III — the former No. 2 lottery pick in 2018 — athletic wing Hamidou Diallo, and center Isaiah Stewart as three such role players capable of growing their games in 2022/23.

Curtis thinks that Bagley could become a reliable option in the post if he can stay healthy next year. Curtis also opines that Diallo could see his standing in the Detroit hierarchy improve if he grows as a long-range shooter. Stewart’s three-point output has been limited in the last two seasons. He has connected on 33% of his 0.8 attempts thus far in his NBA career. Curtis writes that the 6’8″ big man showed off an increased willingness to let fly from outside during two Summer League contests with Detroit in Las Vegas this year. Overall, Stewart shot 5-of-9 from outside.

JUNE 28, 9:03am: The Pistons have officially exercised Diallo’s option in advance of today’s deadline, tweets Smith.

JUNE 27, 8:48am: The Pistons will likely pick up their team option on wing Hamidou Diallo for the 2022/23 season, sources tell James L. Edwards III of The Athletic (Twitter link). Exercising that option would lock in Diallo’s $5.2MM salary for ’22/23.

While turning down Diallo’s option would help the Pistons maximize their cap room, the team likes his athleticism and versatility, and his $5.2MM option salary isn’t exorbitant. Keith Smith of Spotrac (Twitter link) estimates Detroit would still have over $40MM in cap space even with Diallo on the books.

While Diallo’s option looks like a good bet to be exercised, the Pistons are unlikely to pick up Frank Jackson‘s team option, according to Edwards and Will Guillory of The Athletic. That option would pay Jackson a $3.15MM salary for 2022/23.

Jackson would become an unrestricted free agent if the Pistons decline his option.

The Pistons must officially finalize decisions on Diallo’s and Jackson’s options, as well as Luka Garza‘s team option, by Tuesday. The deadline for Carsen Edwards‘ team option is Wednesday.

Pistons’ Hamidou Diallo Out For Season

Pistons swingman Hamidou Diallo will miss the remainder of the 2021/22 season with a left index finger avulsion fracture, the team announced. He suffered the injury against Chicago on March 9. 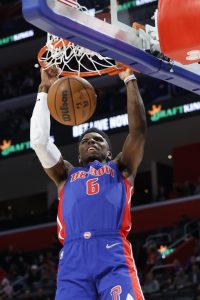 The high-flying Diallo was the 45th pick of the 2018 draft after a single collegiate season with Kentucky. He spent his first two-plus seasons with Oklahoma City prior to being traded to Detroit last March.

In 58 games this season, including 29 starts, Diallo continued to be a valuable contributor. He averaged 11 points, 4.8 rebounds, 1.3 assists and 1.2 steals on .496/.247/.650 shooting. The 23-year-old struggles on threes and free throws, but he’s extremely athletic, a great finisher, and plays solid defense.

The Pistons hold a $5.2MM team option on Diallo for next season, so he could technically become an unrestricted free agent in 2022 if the Pistons decline the option, but I think that’s pretty unlikely since it’s an affordable salary for a solid young player.

Marvin Bagley III is headed to free agency but he seems intent on remaining with the Pistons, as he told James Edwards III of The Athletic.

Bagley has enjoyed his experience with Detroit since he was dealt by the Kings last month. He’s also been productive, averaging 14.1 PPG and 7.1 RPG in 27 MPG during his first 10 games with the Pistons.

“We’ve got some amazing talent here. Now, it’s about figuring out how to work together, gel together to do something bigger,” he said. “I’m definitely excited about it. I can’t wait to be around the guys even more, figure them out even more and make runs in the playoffs … even get some championships here. I’m excited about it.”

Bagley didn’t receive a rookie scale extension with Sacramento. His qualifying offer, which would make him a restricted free agent, will be $7.3MM since he won’t meet the starter criteria.

The Pistons won in Boston just before the All-Star break but they’ll be shorthanded when they visit for the second time on Friday. The team has ruled out starting center Isaiah Stewart and key reserves Killian Hayes, Hamidou Diallo, Rodney McGruder and Frank Jackson due to an assortment of injuries, Omari Sankofa II of the Detroit Free Press tweets. Diallo (finger sprain) and McGruder (hamstring strain) were injured during the loss to the Bulls on Wednesday.

Diallo is being penalized for shoving a referee with 6:29 left in the first half of yesterday’s 113-104 defeat to the Celtics, per the NBA’s statement. With the loss, the Pistons’ record fell to 14-46 on the season.

The 23-year-old swingman, drafted with the No. 45 pick out of Kentucky in 2018, was assessed a technical foul and ejected at the time of the incident, ultimately appearing in just 10:41 of the contest. He has been having a solid season for a rebuilding Pistons team during his first full year in Detroit.