Veteran forward James Ennis has signed a contract to play in Russia with BC Samara, the team announced in a press release (hat tip to Alessandro Maggi of Sportando).

Free agent forward James Ennis has agreed to a lucrative deal in Israel with Hapoel Haifa, sources told Hoops Rumors. Ennis will head overseas for the first time since the 2013/14 season. 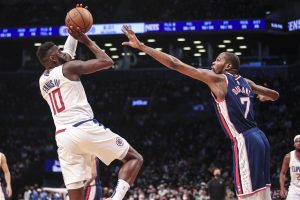 Ennis, who has signed 10-day contracts with the Nets, Clippers and Nuggets since December, plans to leave the door open for an eventual NBA return, sources said.

After being selected with the 50th overall pick in the 2013 draft, Ennis began his professional career as a draft-and-stash player, spending a year in Australia and Puerto Rico before coming stateside in 2014.

An eight-year NBA veteran, Ennis has since appeared in 395 regular season games. In addition to Brooklyn, Los Angeles and Denver, he has also made stops in Miami, Memphis, New Orleans, Detroit, Houston, Philadelphia and Orlando since making his NBA debut.

In 41 games with Orlando last season, Ennis averaged 8.4 points per game and made 43.3% of his three-point attempts, the second-highest mark of his career. The 31-year-old also showed versatility by guarding multiple positions defensively.

Hapoel Haifa currently ranks seventh in the 12-team Israeli Basketball Premier League with a 9-8 record, putting the club on track to qualify for the eight-team postseason. Ennis will join former Celtics and Knicks guard Kadeem Allen as the players on the roster who have NBA experience.

6:53pm: The signing is official, according to a team press release.

2:04pm: The Nuggets intend to sign forward James Ennis to a 10-day contract, according to Shams Charania of The Athletic (Twitter link), who says the plan is for Ennis to be available for Tuesday’s game vs. the Clippers.

The Nuggets, who have a full 15-man roster, will sign Ennis using a hardship exception. Will Barton has entered the health and safety protocols, per Charania (Twitter link), making the team eligible for a new hardship addition when Carlik Jones‘ 10-day contract expires tonight.

Denver is also reportedly likely to sign DeMarcus Cousins to a 10-day contract. The team doesn’t have any players besides Barton in the protocols, but will qualify for a non-COVID hardship exception because at least four players are on the shelf with long-term injuries.

Less than 24 hours ago, it looked like Ennis would be joining another Northwest team, having reportedly lined up a 10-day deal with Utah. However, the Jazz decided to sign Denzel Valentine instead after Ennis was said to be a close contact of someone who tested positive for COVID-19. Presumably, the Nuggets are confident that Ennis will clear the testing process.

JANUARY 10, 1:02pm: The Jazz have officially signed Valentine to a 10-day contract, according to NBA.com’s transactions log.

Utah pivoted away from Ennis because he was a close contact of someone who tested positive for COVID-19 and the Jazz wanted to make sure their newly-added player could be cleared in advance of Monday’s game vs. Detroit, Charania tweets.

JANUARY 9, 7:12pm: Utah no longer plans to sign James Ennis to a 10-day contract, according to ESPN’s Adrian Wojnarowski (Twitter link). Instead, the team will sign forward Denzel Valentine in his place, Wojnarowski tweets.

Valentine holds five years of NBA experience and most recently played in Cleveland. He has appeared in 254 games in his career, averaging 7.0 points and 3.4 rebounds per game. In his 22 games with the Cavaliers this season, he averaged 2.9 PPG in 9.3 MPG, shooting 37.1% from the floor.

JANUARY 9, 5:52pm: The Jazz plan to sign veteran forward James Ennis to a 10-day contract, according to Shams Charania of The Athletic (Twitter link). Ennis most recently played on 10-day contracts with the Nets and Clippers.

Utah lost forwards Rudy Gay and Elijah Hughes to the NBA’s health and safety protocols on Sunday, opening space to add Ennis to the rotation. The team is also missing Rudy Gobert and Joe Ingles due to the protocols.

For his career, Ennis has averaged 6.7 points and 3.3 rebounds in 20.4 minutes per game across 392 appearances, making stops with nine different NBA teams. In 41 games with the Magic last season, the 31-year-old averaged 8.4 PPG and 4.0 RPG, shooting 43.3% from three-point range.

Utah owns the third-best record in the Western Conference at 28-12. The team is also 17-3 at home and has upcoming games against Detroit on Monday and Cleveland on Wednesday.

DECEMBER 29: The Clippers have officially signed Ennis to a 10-day hardship deal, the team announced today. The contract will run through January 7, covering L.A.’s next five games.

DECEMBER 28: Veteran forward James Ennis is expected to sign a 10-day hardship contract with the Clippers, Shams Charania of The Athletic tweets.

Ennis’ 10-day contract with the Nets expired last night and our JD Shaw reported today (via Twitter) that the team didn’t plan to sign him to a second deal. Ironically, Ennis made a cameo appearance against the Clippers on Monday. He also played one other game for the Nets.

The well-traveled Ennis appeared in 41 games for the Magic last season, including 37 starts. He averaged 8.4 PPG and 4.0 RPG in 24.0 MPG. He failed to find a free agent offer after  playing out his one-year, $3.3MM contract with Orlando.

The Clippers currently have three players in the league’s health and safety protocols.

DECEMBER 18: Brooklyn has signed both players, the team tweets.

DECEMBER 16: The Nets are planning to use the hardship exemption to sign forward James Ennis, Shams Charania of The Athletic tweets. They will also give Shaquille Harrison a 10-day deal using the same exemption, Chris Haynes of Yahoo Sports tweets.

Despite being shorthanded, Brooklyn won its fourth straight by downing Philadelphia 114-105. The club had only nine players available, including Langston Galloway, who received a 10-day contract on Thursday using the exemption.

The well-travelled Ennis appeared in 41 games for the Magic last season, including 37 starts. He averaged 8.4 PPG and 4.0 RPG in 24.0 MPG. He failed to find a free agent offer after  playing out his one-year, $3.3MM contract with Orlando.

Harrison played a combined 34 regular-season games off the bench for the Jazz and Nuggets last season. He also appeared in nine playoff games for Denver. He was waived by the Sixers during training camp.

“I don’t know we can continue to lean on him the way we have,” he said, according to ESPN’s Tim Bontemps. “It doesn’t feel right.”

Immanuel Quickley has become the latest Knicks player to enter the NBA’s health and safety protocols, the team announced today (via Twitter). Quickley joins RJ Barrett, Obi Toppin, Kevin Knox, and Quentin Grimes in the protocols, as COVID-19 continues to drain New York’s roster of available players. If Quickley tested positive for the virus, he’ll be out for the next 10 days or until he can return two consecutive negative tests at least 24 hours apart.

Free agent forward James Ennis worked out for the Lakers this week, sources tell Jovan Buha of The Athletic (Twitter link). Ennis, who was linked to Los Angeles earlier in free agency, would make sense as a depth piece on the wing for the Lakers, who only have 13 players on guaranteed contracts.

As we relayed earlier today, the Lakers figure to keep their 15th roster spot open during the regular season to keep their projected tax bill in check, but the 14th spot remains up for grabs.

Here’s more from around the West:

The Trail Blazers have 13 players with guaranteed contracts on their roster and have added Dennis Smith Jr. and Marquese Chriss on non-guaranteed deals to vie for one of the team’s open roster spots. However, that competition may end up including more veterans than just Smith and Chriss.

The Blazers still only have 16 players under contract, which means there are four more spots available on their 20-man offseason roster.

As we wait to see how Portland fills those openings, here are a few more items of interest from Scotto:

With Paul Millsap agreeing to join the Nets, the Bulls don’t have a lot of attractive free agent options to add to their frontcourt depth, K.C. Johnson of NBC Sports Chicago notes. Millsap strongly considered the Bulls but they now have to shift gears. They could bid for restricted free agent Jarred Vanderbilt, take a flier on D.J. Wilson or add an international player to fortify the power forward spot. They could also sign small forward James Ennis and use him in smaller lineups, Johnson adds. Otherwise, they may have to pursue a trade.