The NBA has issued a memo to its 30 teams, warning that franchises will not be allowed to pursue or administer COVID-19 vaccines on a team-wide basis ahead of public health guidelines for prioritization, according to ESPN’s Adrian Wojnarowski.

The league will make exceptions for team physicians, health-related personnel, older staff members, and those with underlying conditions, however, Wojnarowski notes.

Throughout the country, states are administering vaccine doses to healthcare workers as the fight against COVID-19 rapidly accelerates. The vaccines come from Pfizer and Moderna, with a country-wide expectation that those with an increased risk of contracting the virus will have access to the vaccine sooner.

Seniors and those with underlying conditions would naturally come next, though many have questioned whether the NBA would move quickly and get its players and staffers vaccinated sooner than expected.

“It goes without saying that in no form or way will we jump the line,” commissioner Adam Silver said last week. “We will wait our turn to get the vaccine. When you think about the logistical feat that now the federal and state governments are undertaking, where if every citizen ultimately requires two doses and with a population of over 300 million, it’s beyond comprehension when you start to begin to think about the logistical challenges of transporting and distributing this vaccine.”

The Knicks still haven’t settled on a starting point guard but Frank Ntilikina is “motivated” by the franchise’s decision to pick up his contract option for next season, as he told Marc Berman of the New York Post and other reporters. The Knicks took a cap hit of $6,176,578 to retain Ntilikina through the 2020/21 season. “It’s great here in New York to be part of this situation,” he said. “It’s motivation and a big excitement. It makes me willing to give even more on the court on a daily basis.”

8:05pm: The transaction is official, according to a team press release.

This comes as a surprising development, as the Rockets were expected to claim Evans after the two-way player was waived by the Suns on Saturday. Oklahoma City, which has tumbled to sixth in the Western Conference standings, made a preemptive strike to prevent Evans from going to Houston. The Rockets are currently third in the West.

It’s a kind of homecoming for the 22-year-old Evans, who starred at Oklahoma State. He made seven brief appearances with Phoenix this season.

Oklahoma City had a two-way opening after converting Deonte Burton‘s two-way deal to a standard contract earlier this month. Two-way players are not eligible for the playoffs.

It’s unlikely Evans will get any significant playing time with Russell Westbrook, Dennis Schroder and Raymond Felton at point guard.

Houston was looking to fill a two-way slot after promoting Danuel House to its 15-man roster.

The Clippers waived him in October just before the start of the regular season, although he had a guaranteed $1.378MM deal.

4:17pm: The Suns will waive two-way player Jawun Evans, who already has interest from the Rockets, tweets Michael Scotto of The Athletic.

Evans signed a two-way deal with the Suns in December, but has only appeared in seven games for Phoenix, playing about nine minutes per night and averaging less than a point per game. He was much more productive with Northern Arizona, posting a 15.1/3.8/5.8 line in 32 games.

The second-year point guard had a promising rookie season with the Clippers, but couldn’t earn a spot on this year’s roster. He was waived in October just before the start of the regular season, although he had a guaranteed $1.378MM deal.

The Suns won’t be able to replace Evans because the deadline for signing two-way players has already passed. The G League season ends this weekend, and Northern Arizona won’t be in the playoffs.

Houston has a two-way slot open after promoting Danuel House to the 15-man roster. No move would be necessary before adding Evans, but the Rockets’ record puts them toward the back of the line for waiver claims, so it’s possible another organization could seize Evans. Teams will have 48 hours to submit claims once Evans is officially waived.

Over the weekend, the Suns struck a deal — which initially started as a failed three-team trade — that sent swingman Trevor Ariza to the Wizards in exchange for Kelly Oubre and Austin Rivers. The deal became official on Monday as both teams announced the move.

The Wizards reunited with a former player who has experience contending for the postseason. For the Suns, their return is more rooted in maintenance, head coach Igor Kokoskov told reporters (via Gina Mizell of The Athletic).

“We need somebody who’s gonna help us with maintaining,” he said.  “A lot of games, we can’t go through the 48 minutes…We’re gonna find their roles. We definitely can use the talent and experience they have.”

Kokoskov’s comments are reflective of the Suns’ NBA-worst 6-24 record. It’s possible that Phoenix trades one or both of their new players closer to the trade deadline but in the meantime, they should help the Suns at least appear competitive.

Check out more Suns notes below:

5:55pm: The Suns have officially signed Evans, the team announced in a press release.

5:00pm: The Suns will sign guard Jawun Evans to a two-way contract, Michael Scotto of The Athletic tweets.

The Suns have been searching for a short-term solution at point guard with Devin Booker, who had been moved to the point in the starting lineup, nursing a hamstring injury.

Phoenix had an open two-way slot. George King, a shooting guard, has the other two-way deal.

The Clippers waived Evans in mid-October despite having a guaranteed contract worth approximately $1.378MM after they acquired swingman Wesley Johnson. Evans underwent sports hernia surgery last spring after appearing in 48 games with the Clippers as a rookie. He averaged 4.8 PPG and 2.1 APG in 16.2 MPG.

The Oklahoma State product was the 39th pick of the 2017 draft and was traded by the Sixers to the Clippers in a draft-night swap.

4:11pm: The Clippers have officially announced their trade with the Pelicans and confirmed that they’ve waived both Ajinca and Evans. L.A. is now in compliance with the regular season roster limit. 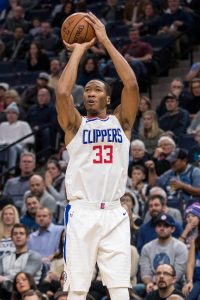 2:19pm: The Clippers and Pelicans have reached a trade agreement that will send Alexis Ajinca to Los Angeles and Wesley Johnson to New Orleans, according to Shams Charania of The Athletic (Twitter link). Marc Stein of The New York Times first reported (via Twitter) that the two teams were in advanced discussions on a swap involving Ajinca and Johnson.

From the Clippers’ perspective, the trade will simply be about saving a little money before they make their final roster cuts. Ajinca ($5.29MM) earns a more modest 2018/19 salary than Johnson ($6.13MM) and both players are on expiring deals.

According to ESPN’s Adrian Wojnarowski (via Twitter), the Clippers will waive Ajinca after acquiring him. 2017 second-round pick Jawun Evans will be Los Angeles’ other cut, Wojnarowski adds. That means that non-guaranteed players Patrick Beverley and Tyrone Wallace will both open the regular season on the Clips’ roster.

There are some teams that like Evans, according to Keith Smith of RealGM.com (Twitter link), but those clubs opted not to trade for the second-year guard, who could draw interest on waivers or as a free agent if he goes unclaimed.

As for the Pelicans, they weren’t expecting to get much out of Ajinca, who missed the entire 2017/18 season with knee issues and still hadn’t been cleared for contact at the start of training camp. By swapping him for Johnson, New Orleans will add some veteran depth at a position of need, without sacrificing future cap flexibility.

With the roster deadline for the 2018/19 season just a few days away, the Clippers are exploring the trade market in the hopes of finding a deal or two that will help them clear their roster logjam, reports Keith Smith of RealGM.com (Twitter link). According to Smith, the club had been hoping to address the issue in a potential Jimmy Butler trade, but that seems like a long shot at this point.

The Clippers have 15 players on guaranteed contracts, but likely won’t end up keeping those specific 15 players on their regular season squad. Patrick Beverley has a non-guaranteed deal and Tyrone Wallace has a partial guarantee worth $300K, and both guards are strong candidates to make the roster.

Of the players with guaranteed salaries, Wesley Johnson ($6.13MM) and Jawun Evans ($1.38MM) are among those who may not be locks for the 15-man squad. Neither player projects to have a major role in the Clippers’ 2018/19 rotation.

The Clippers already found a trade that allowed them to clear one guaranteed salary when they sent Sam Dekker to Cleveland in August. If the team can’t find similar deals in the coming days, two players will need to be waived in order to get the roster down to 15 (plus a pair of two-way players) for opening night.

Kings lottery pick Marvin Bagley III has a pelvic bone bruise and will miss the remainder of summer-league action, Chris Mannix of Yahoo Sports tweets. Bagley, who suffered the injury during the Kings’ game against the Suns on Saturday, will be able to resume basketball activities after 1-2 weeks of rest. The 6’11” Bagley was the No. 2 pick in the draft after one season at Duke.

In other news around the Pacific Division:

Jimmy Butler‘s return date remains unclear, but it looks like the Timberwolves forward is getting closer and closer to getting back into the lineup. According to Sam Amick of USA Today (Twitter link), Butler took part in five-on-five action during practice today for the first time since injuring his knee in February.

The Timberwolves only have four games left in the regular season, but Butler is still expected to return before the playoffs. Minnesota’s next game is on Thursday in Denver, and the Wolves would certainly like to have their veteran star back for that contest, which will be big for playoff purposes.

If Butler can’t suit up for the Timberwolves on Thursday, he could aim to return Friday against the Lakers, next Monday against the Grizzlies, or for next Wednesday’s finale against the Nuggets once again.