Sixers power forward Al Horford shot down an ESPN report that his new team was guilty of tampering prior to free agency. He addressed the issue on the Dan Patrick Show (hat tip to NBC Sports Boston’s Chris Forsberg). Horford declined his team option with the Celtics and signed a four-year, $109MM contract with Philadelphia. “It’s ridiculous. … (Celtics GM) Danny [Ainge] was really good to me. I know he’s definitely frustrated that things didn’t work out with us,” Horford said.

The Lakers felt betrayed by Kawhi Leonard in the free agent process, ESPN’s Brian Windhorst said on his latest podcast (hat tip to Michael Kaskey-Blomain of CBS Sports). Some members of the team’s front office believe Leonard “played” them as he negotiated a deal with the Clippers. Leonard didn’t announce his intentions until July 6, causing the Lakers to miss out on other free agents while they were waiting.

The Raptors weren’t happy with the way things worked out either, Windhorst adds, saying that Leonard asked for “the sun, the moon, the stars” before deciding to leave.

The Celtics have been slumping but Kevin Durant believes they’ll be dangerous when the playoffs arrive, as the Warriors star told a group of reporters, including ESPN’s Nick Friedell. Durant, whose team faces Boston on Tuesday, believes the Celtics are “still getting used to each other” but they’ll be a tough out in the postseason. “They’re right up there at the top,” Durant said. “They’ve been losing a couple games, but they’ve got the top talent, some of the top talent on that team, so they’ll be fine once the playoffs start.”

October 15th, 2018 at 5:15pm CST by Dana Gauruder
Celtics point guard Terry Rozier turned down a rookie scale extension offer prior to Monday’s deadline and will become a restricted free agent next summer, A. Sherrod Blakely of NBC Sports Boston reports. Boston offered Rozier approximately $12MM annually, according to Blakely, but chose to take his chances in free agency. Talks were cordial and the two parties will revisit each other when Rozier hits the market, Adrian Wojnarowski of ESPN tweets.
“I’m in a great situation,” Rozier told Blakely. “My team (representatives) felt it wasn’t good for me to sign an extension right now. It opens my options a little bit, but I’m focused on what’s happening right now.”
Rozier is expected to have multiple suitors even as a restricted free agent, since Kyrie Irving recently announced that he plans to re-sign with the Celtics next summer, Blakely notes. Rozier broke out last season, particularly after Irving went down with a knee injury. He was especially potent in the playoffs, averaging 16.5 PPG, 5.3 RPG and 5.7 APG.
We have more extension decisions:
Retweet 3 Share 0 Send via email0

There are conflicting views among lottery teams over the medical report on Michael Porter Jr., tweets ESPN’s Jeff Goodman. Doctors from some teams advised staying away from Porter entirely, but medical staffs from other organizations don’t believe the risk is all that high. Concerns about the long-term condition of Porter’s back have caused ESPN’s Jonathan Givony to drop him to 12th in his latest mock draft.

There are a few more draft notes to pass along:

The Clippers have their eyes on Michael Porter Jr. and are hoping to use their picks at No. 12 and 13 to trade up in the draft, according to Kevin O’Connor of The Ringer. The Missouri forward, who missed almost the entire season with a back injury, could give L.A. a reliable scorer in the frontcourt. O’Connor notes that team owner Steve Ballmer stopped his session with the media at the combine to listen to Porter’s interview.

Porter, who is projected at No. 8 to the Cavaliers in the latest mock draft by ESPN’s Jonathan Givony, told reporters he had combine interviews scheduled with 13 teams, including the Clippers. He also stated that he believes he’s “the best player in the draft.”

L.A.’s challenge is finding a team willing to trade down. O’Connor cites the Grizzlies, Mavericks, Magic and Bulls — who hold picks four through seven — as teams in need of multiple assets. However, it’s not clear if any of them is willing to move back in the draft, and O’Connor has heard that Memphis is planning to keep its No. 4 pick. The Grizzlies are looking for size, O’Connor adds, but are the only team in the top eight not to ask for a meeting with Texas center Mo Bamba.
O’Connor’s recap on the combine is filled with interesting tidbits. Here are a few of the highlights:
Retweet 4 Share 0 Send via email0

Despite starting the season with four centers, that could become a position of need for the Knicks this summer, writes Marc Berman of The New York Post. Enes Kanter has signed with Mark Bartelstein, one of the NBA’s most powerful agents, as he ponders whether to opt out of an $18.6MM salary for next season, adds Stefan Bondy of The New York Daily News.

Backup center Kyle O’Quinn has a $4.3MM opt out that he is expected to exercise, as he recently expressed a desire to join a playoff contender. Joakim Noah is on an extended leave of absence from the team, and Willy Hernangomez has already been traded to the Hornets. Berman expects the Knicks to use the stretch provision on Noah once September 1 arrives to open up future cap space.

University of Florida shooting guard Jalen Hudson plans to declare for the draft without hiring an agent, Jeff Goodman of ESPN tweets. A Virginia Tech transfer, the 6’6” Hudson averaged 15.5 PPG in his junior year while making 40.4% of his 3-point tries. He’s currently ranked No. 39 on ESPN’s Jonathan Givony’s Top 100 prospects list.

In other news regarding the draft: 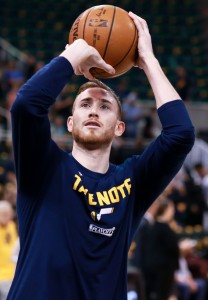 2:34pm: Hayward has changed his mind four times since Saturday, a source tells Tony Jones of The Salt Lake Tribune (Twitter link). Agents are speculating to Sean Deveney of The Sporting News that a sign-and-trade or possibly a separate Celtics deal is holding up a formal announcement (Twitter link).

2:25pm: Boston’s offer is $127.8MM over four years, with a player option likely after the third season, reports A. Sherrod Blakely of CSNNE.

2:05pm: The leak regarding Hayward’s decision may lead to a delay in his announcement, Himmelsbach tweets, with Bartelstein suggesting the situation may not be resolved today. “That was the goal,” he said, “but now we’ve got to kind of regroup here a bit.”

Jazz president Steve Starks has tweeted a statement that reads, “We trust Gordon and his agent that no decision has been made. Good communication all day and a great relationship.”

1:50pm: The Celtics haven’t heard from Hayward yet, but they aren’t denying the report from ESPN, tweets Mark Murphy of The Boston Herald. Sources are telling Adam Himmelsbach of The Boston Globe that the move is a formality and the teams just need to be notified (Twitter link).

1:40pm: Conflicting information is beginning to filter out concerning Gordon Hayward. David Aldridge of TNT claims Hayward has not reached a decision and is still weighing his options (Twitter link). Hayward’s agent, Mark Bartelstein, says the same thing to Adrian Wojnarowski of ESPN.com. “Gordon hasn’t made a decision yet,” Bartelstein said. “We are still working through it.” (Twitter link).

The All-Star forward, who spent his first seven NBA seasons in Utah, was considered the top prize left on the free agent market. The Celtics, Jazz and Heat all held meetings with him over the past three days. The move will reunite him with Brad Stevens, his college coach at Butler.

Boston’s belief that it had a shot at Hayward affected its decision to be conservative in its pursuit of Jimmy Butler and Paul George, according to Eric Pincus of Basketball Insiders (Twitter link).

With about $27MM in cap space, the Celtics don’t have quite enough cap room to sign Hayward to a full max deal. Hayward could agree to accept a little bit less, or the Celtics could try to move some salary before the moratorium ends on Thursday. One path, Blakely tweets, is to pull their qualifying offer for Kelly Olynyk, renounce all their free agents, waive Jordan Mickey and Demetrius Jackson and trade away one other contract.

Hayward, 27, is coming off his best season, setting careers highs with 21.9 points and 5.4 rebounds per game. He gives the Celtics another dangerous shooter who can stretch defenses and share the scoring load with Isaiah Thomas.

Trail Blazers big man Mason Plumlee doesn’t expect to get a new deal done today, per Joe Freeman of The Oregonian (Twitter link). “Unless I go to my phone and my agent has something unexpected for me, there’s not going to be an extension,” Plumlee said. Agent Mark Bartelstein said earlier today that there was “no news” on the Plumlee front, Freeman notes (via Twitter). Still, the 26-year-old would like to remain in Portland long-term (Twitter link via Freeman).

Here are a few more updates and rumors on extension talks around the NBA, with tonight’s deadline looming…