Collin Sexton‘s season-ending surgery has thrust Isaac Okoro into the spotlight for the Cavaliers, according to Chris Fedor of Cleveland.com.

The 20-year-old Okoro has had a terrible start to the season shooting the ball, with a slash line of .369/.176/.720 through 11 games. The team doesn’t expect Okoro to replicate Sexton’s offensive output; it’s not why they drafted him, and it’s not what he hangs his hat on, writes Fedor. The second-year wing is an athletic, defense-oriented hustle player who’s a good finisher in transition.

Coach J.B Bickerstaff says the Cavs aren’t concerned with Okoro’s poor shooting yet, but they need him to stay aggressive and make the right plays on offense to keep opposing defenses honest.

“Not yet is there a level of concern,” Bickerstaff said. “We have to figure out how to help him. How do we put him in positions to be successful and what does he need to do to help this team? That’s the most important thing. We all need to make open shots. I think we have had open shots out there that we can knock down. But each guy has a different role. He has to make himself more difficult to guard. That’s something that we have been talking to him about. He is a really good mover, he’s a really good runner, he can catch and finish at the rim, he’s a good offensive rebounder. We have to get him to do more of those things. He just needs to impact the game the way he impacts the game. We don’t need him to score 20 points a night. We need to help this team win.”

The Cavs have lost four straight games and sit at 9-9. They’ve dealt with several injuries and illnesses to key players, including Okoro, who was sidelined for seven games with a strained hamstring.

Nate Bjorkgren Back With Raptors As Assistant

The Raptors are listing Nate Bjorkgren as an assistant coach, Blake Murphy of Sportsnet.ca tweets.

Bjorkgren was at Toronto’s training camp as a consultant and it seems the club has rehired him in his previous capacity. Bjorkgren was on Nick Nurse’s staff until he was hired as the Pacers’ head coach prior to last season. His tumultuous one-year stint ended in June when the team fired him.

Bjorkgren reportedly had major communication issues with players and coaches alike in Indiana and the front office opted to bring back Rick Carlisle for a second stint. Bjorkgren had one more guaranteed year on his contract.

He was an assistant on Nurse’s Team Canada staff this summer.

Raptors head coach Nick Nurse cited COVID-19 and injuries as reasons why the battles for the last two or three spots on the team’s regular season roster are more important than ever, tweets Josh Lewenberg of TSN.ca. As Nurse pointed out, even if a player makes the team as a 13th or 14th man, he may end up being thrust into a rotation role if others ahead of him are sidelined.

Ishmail Wainright, Yuta Watanabe, Freddie Gillespie, Sam Dekker, and Isaac Bonga are the five players believed to be fighting for spots on the 15-man squad. Toronto has 12 players with fully guaranteed salaries — assuming none of those players are traded or cut, there would be room on the roster for up to three players from that five-player group.

With Paul Millsap agreeing to join the Nets, the Bulls don’t have a lot of attractive free agent options to add to their frontcourt depth, K.C. Johnson of NBC Sports Chicago notes. Millsap strongly considered the Bulls but they now have to shift gears. They could bid for restricted free agent Jarred Vanderbilt, take a flier on D.J. Wilson or add an international player to fortify the power forward spot. They could also sign small forward James Ennis and use him in smaller lineups, Johnson adds. Otherwise, they may have to pursue a trade.

The Nets plan to re-sign unrestricted free agent Blake Griffin and are also looking to add depth at center as the free agency period begins, general manager Sean Marks told ESPN’s Malika Andrews and other media members (Twitter link). Money does not appear to be an object — Marks said the Nets are “married to the luxury tax” and owner Joe Tsai is willing to spend whatever it takes to win.

Jimmy Butler will not play for Team USA at the Tokyo Olympics, Ira Winderman of the South Florida Sun Sentinel tweets. Butler had an invite but he battled through a variety of ailments this season and had a short turnaround between seasons after Miami surprisingly reached the NBA Finals last summer.

We have more info on this year’s Olympics:

Prior to the 2021 trade deadline, J. Michael of The Indianapolis Star reported that the Hornets, Lakers, Clippers, Knicks, and Pelicans were among the teams to express interest in Pacers big man Myles Turner. With Turner possibly available again this summer in trade talks, many of those teams could renew their interest in the NBA’s shot-blocking leader.

Exploring that possibility, Michael tweets that the Hornets and Timberwolves are the teams that seem to “really” want Turner. Michael speculates (via Twitter) that Charlotte would be the team most likely to make an aggressive trade offer for the 25-year-old if the Pacers are willing to move him.

Here’s more out of Indiana:

The team fired Bjorkgren on Wednesday after one season on the job, but the decision has seemed inevitable for weeks. Reports began circulating in early May that management was unhappy with Bjorkgren’s coaching style and his relationship with his players and staff.

With only one season remaining on his two-year contract, there was little reason not to move on.

“It’s my fault,” Pritchard said after the decision was made. “It’s our organization’s fault. We’ve got to do better.” He later added, “When we hired Nate, we wanted to take a risk. We wanted to try something new … I’m thankful for Nate; he worked his tail off. There were some things he did well. And there were some things I think he wished he had done differently.”

Bjorkgren, 45, is a former G League coach who spent two years as an assistant with the Suns and two years with the Raptors before the opportunity arose with Indiana. He led the Pacers to a 34-38 record and a spot in the play-in tournament despite significant injuries, but they were eliminated after two games.

Bjorkgren got a reputation in the locker room for not being tough enough, tweets J. Michael of The Indianapolis Star. Although there were numerous complaints about Bjorkgren, Michael adds there’s no evidence that the team’s best players, Domantas Sabonis and Malcolm Brogdon, ever asked for him to be fired.

Pritchard repeatedly took matters into his own hands, Michael adds (via Twitter). A source said Pritchard went to the locker room following games at least four times this season to berate the players for what he viewed as poor effort. Pritchard had never done that before, according to Michael.

After being burned by the Bjorkgren hiring, Kravitz expects Pritchard to be far more conservative next time. Former Trail Blazers coach Terry Stotts has been mentioned as a candidate, and Kravitz suggests the team might also look at Nets assistant Mike D’Antoni, Clippers assistant Kenny Atkinson and Sixers assistant Dave Joerger, who all have previous head coaching experience.

12:15pm: The Pacers have officially announced in a press release that Bjorkgren won’t be retained for the 2021/22 season. 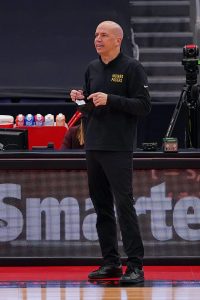 “The 2020/21 season was not what any of us hoped or anticipated it would be, and our results on the court certainly did not meet the standards for what our organization and our fans have come to expect,” Pacers president of basketball operations Kevin Pritchard said in a statement.

“We have determined this is the right time to move in a different direction, and on behalf of the Simon Family and the entire Pacers organization, I want to express my gratitude to Nate for his efforts leading our team. While we do not have a definite timetable for our search, we will move quickly to identify candidates who will make our team and our organization stronger.”

10:56am: The Pacers have decided to part ways with head coach Nate Bjorkgren after his first year on the job, sources tell Adrian Wojnarowski of ESPN (Twitter link).

According to Wojnarowski (Twitter link), Bjorkgren was informed today of the Pacers’ decision to let him go after he met with management on Tuesday. The team intends to seek out a more experienced, established head coach to replace Bjorkgren, who lost the locker room and “much of the organization” this season, Wojnarowski adds.

The Pacers moved on from Nate McMillan a year ago after a fourth consecutive first-round playoff exit in the hopes of hiring a new coach who would modernize the team’s offense and increase its ceiling. Although Bjorkgren did help improve Indiana’s offense, the defense took a major step backward and the former Raptors assistant reportedly had major communication issues with players and coaches alike.

Multiple reports during the final weeks of the regular season indicated that Bjorkgren was on the hot seat, and failing to secure a playoff spot in the play-in tournament presumably didn’t help his chances of sticking around.

Given how many injuries the Pacers dealt with during the 2020/21 campaign, it’s unclear how much more another coach could’ve gotten out of the roster. And since Bjorkgren had one more guaranteed year on his contract, there was a belief that the small-market Pacers may prefer to give him another chance rather than having to commit financially to a second head coaching contract. However, it sounds like the issues with Bjorkgren were too widespread to make continuing the relationship a viable choice.

Indiana becomes the fourth team to enter the market for a new head coach this spring, joining Boston, Portland, and Orlando. Because they conducted an extensive search for a coach in 2020 before landing on Bjorkgren, the Pacers may already have a leg up in this year’s search, having gotten familiar with several candidates who could be on their radar again. However, new candidates will be considered as well.

One of those new candidates, who wasn’t available a year ago, is former Blazers coach Terry Stotts. Chris Haynes of Yahoo Sports reports (via Twitter) that the Pacers are expected to take a look at Stotts, while Jake Fischer of Bleacher Report says (via Twitter) league sources have increasingly identified Stotts as a leading candidate for the job in Indiana. Josh Robbins of The Athletic previously reported that league sources expect the Pacers to interview Steve Clifford following his exit from Orlando.

As for Bjorkgren’s future, Josh Lewenberg of TSN.ca tweets that he wouldn’t be surprised if Nick Nurse‘s former assistant – and good friend – ends up returning to Toronto. The Raptors lost a top assistant midway through the 2020/21 season when Chris Finch was hired as Minnesota’s head coach, and Nurse strongly defended Bjorkgren amidst last month’s negative reports.

Bucks center Brook Lopez will be facing his former team in the conference semifinals and Nets coach Steve Nash believes he could be a key player in the series, according to Ryan Dunleavy of the New York Post. “He could be one of the wild cards,” Nash said. Lopez, who is signed through the 2022/23 season, averaged 15.8 PPG, 6.8 RPG and 1.3 BPG during the first-round sweep of the Heat.