Raptors big man Precious Achiuwa has been sidelined since November 9 after sustaining partial ligament tears in his right ankle and will remain on the shelf for the foreseeable future. Head coach Nick Nurse told reporters on Monday that it will be another two or three weeks before the team even has a clearer sense of a timeline for Achiuwa’s return, tweets Josh Lewenberg of TSN.ca.

One silver lining of Achiuwa’s injury is that it has given two other Raptors bigs an opportunity to prove their mettle as regular contributors.

Veteran forward/center Thaddeus Young has averaged 10.1 PPG, 6.4 RPG, 3.1 APG, and 1.6 SPG in eight games (26.7 MPG) since Achiuwa went down, while forward Juancho Hernangomez has averaged 6.6 PPG and 6.5 RPG in the same eight games (24.2 MPG). Neither player was a rotation mainstay during the early part of the season.

Raptors guard Fred VanVleet will miss his second straight game on Monday due to a non-COVID illness, Josh Lewenberg of TSN Sports tweets. The Raptors are facing the struggling Pistons in Detroit. Forwards Pascal Siakam and Precious Achiuwa are also out of action, while big man Khem Birch is listed as questionable.

Raptors big man Precious Achiuwa has suffered partial ligament tears in his right ankle, the team announced today in a press release. According to Toronto, Achiuwa will wear a walking boot for the next 10 days and has been ruled out indefinitely. 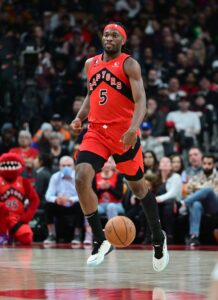 The 23-year-old underwent an MRI last night after Toronto’s win over Houston which confirmed the injury, per Josh Lewenberg of TSN.ca (Twitter link).

The Raptors picked up their ’23/24 team option on the fourth year of his rookie contract last month, so he will be eligible for a rookie scale extension next summer.

Achiuwa is an important bench cog for a Toronto team that is already shorthanded in the frontcourt, with All-NBA forward Pascal Siakam (adductor strain) and center Khem Birch (right knee) currently sidelined. As Lewenberg notes (via Twitter), rookie center Christian Koloko, big man Chris Boucher, and veteran forwards Thaddeus Young and Otto Porter are likely to receive an uptick in playing time with Achiuwa out.

It’s unclear how long Achiuwa will be out of action, since indefinitely is a vague timeline (the Raptors might not know), but it sounds like he could be out for at least several weeks given the nature of his injury.

Sixers forward Tobias Harris is seeing his role change again after a recent injury to James Harden, writes Keith Pompey of The Philadelphia Inquirer. With Harden sidelined for about a month, Harris is being asked to carry more of the scoring load.

“Evolving into what the situation is when presented,” Harris said. “Sometimes that is going to be a space on the floor. And obviously at times, it’s limited play calls. But you just find other ways to adapt.”

Harris is averaging 15.0 PPG through 11 games this season, but that number has risen to 22.0 in the two games without Harden. He’s also taking on more play-making duties, setting up teammates for open three-point shots with drives to the basket.

“I’ve always prided myself on being a very good team basketball player in the half-court offense,” Harris said. “That’s something I was always able to do and be a part of.”

While Chris Boucher would rather have been playing in the Raptors‘ first three games, the veteran forward/center found a silver lining in having to sit out with a hamstring injury, as Doug Smith of The Toronto Star relays.

“To be honest with you, I feel like it was good for me just to see what I can bring to the team, sitting down and watching,” Boucher said on Monday before returning to the Raptors’ lineup in Miami. “If I was playing and we were losing games, I probably wouldn’t see as much.”

Boucher got into quick foul trouble in his season debut on Monday, picking up five fouls in just 12 minutes of action. But he was effective in his limited role, scoring 10 points on 4-of-5 shooting in a Raptors victory.

11:52am: The Raptors have officially announced that they’ve exercised their 2023/24 options on Barnes, Flynn, and Achiuwa, locking in approximately $16.26MM in total salary for the trio in ’23/24.

11:42am: The Raptors have exercised their team option on guard Malachi Flynn for the 2023/24 season, according to ESPN’s Adrian Wojnarowski (Twitter link), and are doing the same for their ’23/24 option on big man Precious Achiuwa, tweets Blake Murphy of Sportsnet.ca.

As Murphy notes, Flynn’s fourth-year option wasn’t a lock to be exercised, since he has yet to establish himself as a regular rotation player in Toronto. However, the Raptors’ decision to guarantee his $3,873,025 salary for 2023/24 suggests they still believe he can become one.

Achiuwa was also Toronto’s most-used reserve in the team’s playoff series vs. Philadelphia, averaging 27.8 minutes per contest despite coming off the bench in five of six games. His fourth-year option for 2023/24 is worth $4,379,527.

The Raptors also hold a third-year option on Scottie Barnes, which will pay the reigning Rookie of the Year $8,008,680 in 2023/24. That option is a lock to be exercised before the October 31 deadline, but it’s not technically official yet, tweets Murphy.

With Dalano Banton likely to make the team after a strong preseason, the Raptors appear to have a three-man battle for their final roster spot, writes Lori Ewing of The Toronto Star. Justin Champagnie, Josh Jackson and D.J. Wilson are all in the running and Friday’s preseason finale is their last chance to make an impression.

The competition is particularly stressful for Champagnie, who missed the first three preseason games with pain in his hip, Ewing notes. He played only eight minutes Sunday, recording one point and one rebound. Champagnie, who appeared in 36 games for Toronto as a rookie last season, estimates that he is 90 to 95 percent recovered from the hip issue.

“I sensed some urgency from Justin,” coach Nick Nurse said. “I think some other guys just kind of let their game each day do what it does. It’s hard to get all excited one game and be not so excited the next because they play good and then not so good. Then they come back in practice and light it up again and get you thinking again. (Making cuts) is always a tricky thing. We’ll see how it all shakes out. I think there are still a lot of questions to be answered.”

Fred VanVleet made changes to his diet as well as his strength and conditioning regimen in order to stay healthy while playing heavy minutes, according to Josh Lewenberg of TSN.ca. Lewenberg notes that VanVleet has played the second-most minutes per game in the NBA over the past three seasons (trailing only James Harden), and 47 of his 55 missed games over that span have come in the second half of seasons.

“It’s a 12-month season now, year ‘round,” said a noticeably slimmer VanVleet. “Hopefully I can stay on this regimen the rest of my career. There’s always gonna be new changes and things you have to adjust and adapt to as you try to grow. I’ve had a hell of a run so far, so to continue to try to keep growing is going to be challenging every year but I’m up for it.”

“It’s not easy,” Nurse said, per Lewenberg. “When you got a super competitive guy who’s playing great and he wants to play, to rest him, to just say, ‘Sorry, it’s your rest time, we don’t care what’s happening on the floor right now, it’s your rest time,’ that’s hard to do. But I think we learned a lot about how we can shift our team around without him in there and I think that we’re going to need to be able to do that. I hope we can get it done.”

Following Danilo Gallinari‘s ACL tear and Robert Williams‘ knee surgery, it remains to be seen whether the Celtics will look to fortify their frontcourt with a free agent addition. If they do, it’s possible veteran big man LaMarcus Aldridge will be one of their targets.

During a TV appearance on Tuesday, ESPN’s Adrian Wojnarowski (video link) said the Celtics showed “a little interest” in Aldridge earlier in the offseason. Dwight Howard, Hassan Whiteside, Blake Griffin, and DeMarcus Cousins are among the other centers and power forwards who remain unsigned with training camps just days away.

While Fred VanVleet, Pascal Siakam, OG Anunoby, and Scottie Barnes look like safe bets to be part of the Raptors‘ starting lineup this fall, the fifth spot may come down to Gary Trent Jr. vs. Precious Achiuwa. And, as Eric Koreen of The Athletic writes, both players will be motivated to have big years — Trent can become an unrestricted free agent next offseason if he declines his 2023/24 player option, while Achiuwa will become eligible for a rookie scale extension in 2023.

If the Raptors decide Achiuwa’s size makes him a better fit for that starting role, Trent is still capable of maintaining or improving his value while coming off the bench, Koreen argues. As a sixth man, Trent’s usage rate would likely be higher than it would be as a starter. Throw in the fact that he’ll only be 24 years old next summer and projects to be part of a playoff team, and Trent should be in line for a nice payday whether he’s a starter or a reserve in 2022/23.