SEPTEMBER 27: Hollis-Jefferson has signed with Besiktas, agent Adie von Gontard confirmed to Jonathan Givony of ESPN (Twitter link). According to Givony, Hollis-Jefferson’s contract with the Turkish club will include an NBA out clause.

Hollis-Jefferson also had a nice run off the bench for Toronto a couple of years ago, but struggled to catch on with NBA teams last season, playing in just 11 games for the Trail Blazers on a couple of 10-day contracts before finishing out the season with the team.

It’s a little surprising that a player who’s had a solid track record and is still just 26 years old couldn’t find another NBA home this summer. However, the league has trended away from players similar to Hollis-Jefferson in recent years, as his unique skill set isn’t as valued without a reliable outside shot or the size to match up against true centers.

Urbonas notes that Besiktas features several former NBA and G League players, and will be participating in the Basketball Champions League, which begins on October 4.

Rondae Hollis-Jefferson Signs With Blazers For Rest Of Season

APRIL 28: The Blazers have officially signed Hollis-Jefferson to a deal for the rest of the season, the team announced in a press release. 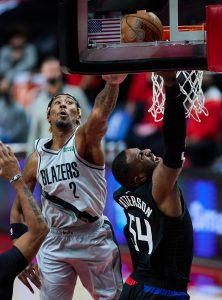 APRIL 27: With the second 10-day contract he signed with the Trail Blazers set to expire, defensive-oriented reserve forward Rondae Hollis-Jefferson will ink a deal that will keep him in Portland for the rest of the 2020/21 season, tweets Adrian Wojnarowski of ESPN.

Because a player is not permitted to sign a third 10-day deal with a team during the same season, it became decision time in a hurry for Portland.

Hollis-Jefferson was actually selected with the No. 23 pick by Portland out of Arizona in 2015, but the Trail Blazers traded him to the Nets before he ever suited up for them. He spent four seasons in Brooklyn before landing with the Raptors for the 2019/20 season.

The 26-year-old Jefferson has appeared in just five games (including one start) for the Trail Blazers this season, averaging a respectable 12.6 MPG, but the athletic forward could help shore up the club’s frontcourt with his ability to cover multiple positions on defense.

If Jefferson officially completes his new deal on Wednesday after his second 10-day expires tonight, he’ll make $245,031 over the course of the season’s final 19 days. Portland’s cap hit would be $210,895.

The Trail Blazers have given Rondae Hollis-Jefferson a second 10-day contract, the team announced in a press release.

The 26-year-old forward got into two games during his first 10-day deal, scoring four points in 12 total minutes. He joined the team on April 8 as Portland faced a league deadline to fill one of its two roster openings.

A first-round draft pick in 2015, Hollis-Jefferson spent his first four seasons with the Nets before signing with the Raptors as a free agent last year. He was with the Timberwolves in training camp, but failed to win a roster spot.

Players can only sign two 10-day contracts with a team during the season, so the Blazers will have to either part with Hollis-Jefferson or sign him for the rest of the season when this deal expires April 27. He will earn $128,963 over the next 10 days.

APRIL 8: The Blazers have officially signed Hollis-Jefferson, according to ESPN’s Adrian Wojnarowski, who tweets that it’s a 10-day contract. The forward will earn $128,963 on the deal.

APRIL 2: The Trail Blazers plan to sign forward Rondae Hollis-Jefferson, Shams Charania of The Athletic tweets. Hollis-Jefferson was on the Timberwolves’ training camp roster but was waived in December.

The Trail Blazers had two openings on their 15-man roster and needed to sign at least one player under NBA requirements. Portland was seeking another wing or guard to fill a roster spot.

The Blazers dropped to 13 players on the 15-man roster in the 2-for-1 trade with the Raptors that brought Norman Powell to Portland.

Hollis-Jefferson, 26, played for the Raptors last season, providing energy and defense off the bench. He averaged 7.0 PPG and 4.7 RPG in 60 games (18.7 MPG) for Toronto.

The veteran forward has averaged 9.3 PPG, 5.6 RPG and 1.9 APG in 294 career NBA games. He played his first four seasons with Brooklyn.

Speaking to Darren Wolfson of SKOR North, Timberwolves owner Glen Taylor praised Rondae Hollis-Jefferson‘s performance during training camp and the preseason, explaining that the team’s decision to release him was an “insurance policy” for roster flexibility.

“If we’d (retained Hollis-Jefferson), then we’d have the roster. We wouldn’t have any room for any movement at all,” Taylor said. “And I just think that you want to go into this year leaving a little bit of flexibility to see if you get some injuries or something like that, that you can bring in somebody to fill it.”

While Taylor’s point is a fair one, it’s worth noting that Hollis-Jefferson had a non-guaranteed contract, as do Jaylen Nowell and Naz Reid, who remain on the roster. So even if the Timberwolves had carried a full 15-man roster into the regular season, they would’ve had some flexibility to make changes if necessary prior to February’s league-wide salary guarantee deadline.

Timberwolves owner Glen Taylor cautiously expects his team to reach the playoffs this season, as relayed by Chris Hine of The Minneapolis Star Tribune.

Minnesota sports a young core of Karl-Anthony Towns, D’Angelo Russell, Anthony Edwards, Malik Beasley and others, and enters the season with higher expectations than it had last year.

“I think I expect playoffs,” Taylor said. “We’re in a really tough division, but I think we really have a good team. By that I mean, what we have done is we aren’t relying on four or five players. I just think the way that we have put this team together that the first unit or second unit should go in and be very competitive with the groups that they need to compete against.”

Taylor understands how difficult it will be to achieve that goal, especially in the Western Conference, but he hopes the acquisitions of point guard Ricky Rubio and No. 1 draft pick Edwards help propel the team to success this season.

Hollis-Jefferson was in camp on a non-guaranteed, minimum-salary contract, but he played well in three preseason games, averaging 7.7 points and 2.0 rebounds per night. After four years in Brooklyn, he joined the Raptors last season and posted a 7.0/4.7/1.8 line in 60 games.

Brown appeared in 10 games for the Hawks last season, but spent most of his rookie year in the G League. Cheatham got into four games for the Pelicans as a rookie, while Cook played a combined 13 games for the Cavaliers and Nuggets.

The moves leave Minnesota’s roster at 14, with 12 guaranteed contracts, plus a pair of two-way players.

Veteran forward Rondae Hollis-Jefferson will be among the players waived by the Timberwolves in advance of the regular season, sources tell Shams Charania and Jon Krawczynski of The Athletic (Twitter link). 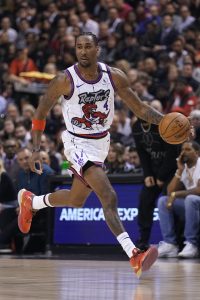 While most of today’s roster cuts are moves that had been anticipated, Hollis-Jefferson’s release comes as a surprise. He had played fairly well in three preseason games – including a 17-point outburst on 6-of-6 shooting on Monday – and the Wolves aren’t exactly loaded with depth at the power forward spot.

According to Krawczynski (Twitter link), the decision to part ways with Hollis-Jefferson is a “flexibility play” for the Wolves, who will enter the season with an open roster spot. Krawczynski hears that there’s a possibility Minnesota will bring back RHJ at a later date, but for now the club wants to keep that 15th spot open in case an injury replacement is required or an opportunity for a two-for-one trade arises.

Hollis-Jefferson, who will turn 26 next month, played for the Raptors last season, providing energy and defense off the bench. He averaged 7.0 PPG and 4.7 RPG in 60 games (18.7 MPG) for Toronto.

Since Hollis-Jefferson was on a non-guaranteed one-year, minimum-salary contract, a team with interest would be able to claim him off waivers on Monday using the minimum salary exception. If he goes unclaimed, he’ll return to the free agent market.

The Timberwolves will have to cut a few more players – likely Tyler Cook, Zylan Cheatham, and Charlie Brown Jr. – to set their regular season roster.

Veteran forward Rondae Hollis-Jefferson is making a strong impression on the Timberwolves so far, writes Chris Hine of The Star Tribune. Hollis-Jefferson is on a non-guaranteed contract, but made a case for a regular season roster spot with his play on Monday night, when he scored 17 points on 6-of-6 shooting and made several plays on defense.

“Since Day 1 Rondae has been great,” Timberwolves wing Josh Okogie said. “He tells me all the time we got to be the ones that anchor the defense down. Just seeing him play is very inspiring. The energy he brought out (Monday), and he just makes you ask yourself, what kind of guy wouldn’t want to play with a guy like Rondae?”

The Timberwolves are only carrying 12 players with fully guaranteed salaries and don’t have a ton of depth at the power forward spot, so Hollis-Jefferson looks like a good candidate to be retained for the start of the season.

“I’m a competitor at the end of the day,” Hollis-Jefferson said, per Hine. “Any time I come out and compete it shows with how I play, the energy. I feel like everything else will naturally come when the time is right. I’m definitely looking forward to being out there competing in the regular season.”

DECEMBER 3: The Timberwolves have officially signed Hollis-Jefferson, the team announced today in a press release.

It’s a non-guaranteed, training-camp deal for one season, Jon Krawczynski of The Athletic tweets.

He played for the Raptors last season, appearing in 60 games. He averaged 7.0 PPG, 4.7 RPG and 1.8 APG in 18.7 MPG. He also saw action in five playoff games but averaged just 7.8 MPG in those appearances.

Hollis-Jefferson, 25, played his first four seasons with the Nets. He could add defensive versatility to Minnesota if he makes the roster.