In a conversation with ESPN colleague Bobby Marks about Portland’s possible approach to this season’s trade deadline, Lowe stated that there are “a lot” of teams around the NBA who would like Hart, specifically citing Miami as a possible suitor since the 27-year-old is a “Heat kind of guy.”

Hart is playing a crucial role this season for the Blazers. In addition to starting all 45 games he has played, he’s averaging 34.0 minutes per contest and ranks third on the team in total minutes played (1,530). However, his contract situation has made him the subject of trade speculation — he holds a player option on his contract for 2023/24, so he could become an unrestricted free agent this summer.

Here’s more from Lowe and Marks:

The Mavericks and Kings are among several teams that have contacted the Wizards about Rui Hachimura, according to Michael Scotto of HoopsHype.

Hachimura, who has been on a scoring tear lately, addressed trade rumors over the weekend, saying he wants to be with a team that “believes in me.” Washington faces a potential salary crunch this offseason with Kristaps Porzingis and Kyle Kuzma both holding player options, and Hachimura might be expendable due to luxury tax concerns.

Hachimura is making just $6.26MM this season, so teams would have to send back at least $4.9MM in salary to Washington in any deal. Scotto notes that the Kings can use either Terence Davis or Alex Len to match Hachimura’s salary.

There had been reports that Hachimura was offered to the Suns as part of a deal for Jae Crowder, although a Wizards official denied that rumor earlier this month. Scotto hears that Washington no longer has interest in Crowder because he may not be able to make an immediate impact after such a long layoff.

As Fedor writes, Mitchell has been dealing with the soreness for a while. He initially sprained his ankle against the Warriors on November 11, which caused him to miss a game, and then aggravated the injury on November 28 against Toronto, when he scored a season-low eight points.

Mitchell, who is averaging a career-high 29.0 PPG with a career-best .496/.424/.890 shooting slash line, was limited during the Cavs’ shootaround on Friday and the team decided to be cautious with him on the first night of a back-to-back, Fedor notes. Caris LeVert will start in Mitchell’s place.

Fox, who is averaging 22.8 PPG with a .507/.366/.826 shooting line, recently disclosed that he’s been dealing with right foot soreness for over a month, and the pain obviously was bad enough to be ruled out tonight. Head coach Mike Brown said the Kings plan to take his injury “day-by-day” and will “see how he feels,” (Twitter link via Anderson).

Second-year guard Davion Mitchell will start in Fox’s place, Anderson adds in another tweet. Kings guard Terence Davis, who was previously listed as questionable, was also ruled out with lower back soreness.

The Lakers should have their two superstars back on Friday night in Philadelphia. LeBron James missed Wednesday’s game in Toronto to rest his sore right ankle, but he’ll be available on Friday, sources tell Dave McMenamin of ESPN (Twitter link). Anthony Davis, who left Tuesday’s game in Cleveland with a non-COVID illness and remained out on Wednesday, is listed as probable to play on Friday, McMenamin adds.

Meanwhile, in Utah, Jazz guard Mike Conley has been cleared to return, as expected, per Tim MacMahon of ESPN (Twitter link). Sidelined since November 19 due to a knee injury, Conley said today that he had already been planning to return tonight, but felt more urgency to get back on the court with Collin Sexton now on the shelf (Twitter link via Eric Walden of The Salt Lake Tribune).

The Kings improved to 12-9 with a rout of the Clippers Saturday afternoon and they seem to have added another element to their already dangerous offense, writes Jason Anderson of The Sacramento Bee. Domantas Sabonis continued his hot shooting from three-point range, connecting on both of his shots from beyond the arc. After starting the season 1-of-12 on three-pointers, Sabonis has hit 8-of-14 in his last 10 games.

“It’s big,” he said. “The more I can keep shooting them and knocking them down, teams are eventually going to have to respect it, which is going to allow me to be even more of a play-maker. A lot of times, I can’t thread the needle because the big is so far down. Now, he has to be up, to open the room up for everybody.”

Sacramento had everyone available today as Trey Lyles returned after missing two games with an illness, Anderson adds. Coach Mike Brown likes having the extra option among his reserves and cited the performance of Terence Davis and KZ Okpala while Lyles was unavailable.

“That just makes our bench deeper,” Brown said. “Trey was playing well when he was playing. Obviously, TD stepped up and played big minutes for us. KZ played some pretty good minutes in the last game. So, it makes my decision making harder, but (Lyles) has been playing his behind off and it’s great to see.”

After being ruled out indefinitely due to a right wrist ECU tendon injury, Kings shooting guard Terence Davis underwent surgery today on the ailment, the team announced in a press release.

The team stated that Davis is expected to be re-assessed in three months. Thus, barring a playoff run, he’ll miss the rest of the NBA season.

At 18-34 and losers of seven straight, the Kings are currently the No. 13 seed in the West. That said, the club is still just 3.5 games out of the No. 10 seed (and thus, a play-in tournament berth) in the conference.

After being dealt to the Kings during the 2020/21, in part due to disturbing legal issues, Davis entered free agency this past summer, and signed a two-year, $8MM deal to return to the club during the offseason.

Kings guard Terence Davis has suffered a right wrist ECU tendon injury which will sideline him indefinitely, per Sean Cunningham of ABC10 (KXTV) Sacramento (Twitter link). The injury occurred during the second quarter of Tuesday’s 128-75 blowout loss at Boston. 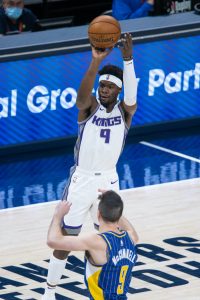 Davis had an MRI on the wrist in Atlanta Wednesday morning which confirmed the injury. An X-ray taken of the wrist in Boston was negative. Davis also received five stitches above his right eye to repair a laceration after the hard fall.

Davis, a third-year undrafted guard out of Mississippi, is in his second season with Sacramento after spending his rookie year and part of last season with Toronto.

He had a tumultuous offseason prior to the 2020/21 campaign in which he was arrested in New York and had domestic assault charges filed against him. The legal problems certainly didn’t help matters for Davis, and the Raptors ended up trading him to the Kings last March in exchange for a second-round pick (Dalano Banton was later selected).

Reserves Buddy Hield and Davion Mitchell figure to see an uptick in minutes with Davis sidelined. The Kings have struggled of late, losing four straight games and eight of their last ten. They currently hold a 18-31 record, 13th in the West.

The Warriors‘ postponed game Thursday in Denver allowed the team to hold a rare scrimmage, which served as a dress rehearsal for Klay Thompson‘s return, writes Anthony Slater of The Athletic. Thompson teamed with backcourt partner Stephen Curry under game-like conditions for the first time since the 2019 NBA Finals, marking a significant step in his return to action after missing two full seasons with injuries.

“Being out there, going up and down with the first unit, that was a big moment for me,” Thompson said. “A silver lining in the NBA canceling the game.”

Thompson has been physically ready to play for about a month, Slater adds, but the team has been cautious to avoid any setbacks. His first game will take place at home, but it’s unlikely to happen Monday, and Slater notes that a January 9 contest against the Cavaliers seems to be emerging as the target date. Thompson will return to the starting lineup right away, but he’s not expected to be used in back-to-backs and will begin with a restriction of about 18 minutes per night.

“Somewhere around there,” he said. “We got such a great, deep team. I don’t need to come back and shoulder a huge load. We’re so deep and talented that I can ease into things, which I’m very grateful for.”

If the Cavaliers are able to host the Raptors Sunday afternoon, both teams will have a shell of their normal lineups. Cavs forward Cedi Osman has become the team’s eighth player in the league’s health and safety protocols, tweets Chris Fedor of Cleveland.com. He joins Jarrett Allen, Ed Davis, Evan Mobley, RJ Nembhard, Isaac Okoro, Lamar Stevens and Dylan Windler.

There’s more COVID-19 news from around the league: