Daniel Gafford thought there was a “50-50” chance he could be dealt by the Bulls before the Wizards traded for him, according to Fred Katz of The Athletic.

“I was in and out (of the lineup). I wasn’t really playing as much,” Gafford said. “So, there was a lot of stuff going on in my head, just really trying to stay as positive as I could.”

The Wizards were not only interested in adding an athletic body in Gafford. They also liked his affordable contract — he has a non-guaranteed $1.78MM salary next season, a guarantee Washington will almost certainly pick up given his production.

Heat center Dewayne Dedmon is ready to help his new team in any way he can as Miami looks to establish playoff positioning in the coming weeks, Anthony Chiang of The Miami Herald writes.

Dedmon, 31, signed a rest-of-season contract with the Heat earlier this month and is available to make his season debut on Sunday against Portland. He’s expected to provide depth for a Miami team that also has Trevor Ariza, Bam Adebayo, Andre Iguodala, Nemanja Bjelica and Precious Achiuwa in the frontcourt.

“I feel like I fit on the defensive end, helping with the rim protection, helping rebound, getting more opportunities for these shooters we’ve got here,” Dedmon said of his fit with the club.

Udonis Haslem – who is in his 18th NBA season, all with the Heat – has not played a single minute this season. And while the 41-year-old would welcome the chance to see some action, he has embraced his increasingly off-court role within the organization, writes Ira Winderman of The South Florida Sun Sentinel.

“I’m always ready,” Haslem said. “And that’s my job, is to stay ready so I don’t got to get ready. And I’m always ready if Spo (head coach Erik Spoelstra) needs to put me out there and contribute to winning basketball games. But I understand that the bigger impact that I have is off the basketball court, before the clock starts.”

Last season, Haslem only played in four regular-season games, but he helped the Heat make their sixth NBA Finals appearance since 2005. The role on the team he plays is deeper than actually going out there to set screens and rebound the basketball, according to Spoelstra, who says the big man is “moving mountains with his leadership.” However, the Heat coach said the team would have no qualms about using Haslem on the court if needed.

“I always have the ultimate confidence in UD,” Spoelstra said. “And he and I have been through so many pressure-packed moments that I feel I can throw him in at any time, even in the fourth quarter if he hadn’t played before that.”

More from the Southeast Division:

Throughout the season, Hoops Rumors takes a closer look at players who will be free agents or could become free agents this off-season. We examine if their stock is rising or falling due to performance and other factors. This week, we take a look at players from the Southeast Division: 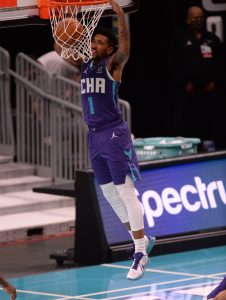 Monk has forced his way back into Charlotte’s rotation — 36-point explosions will do that for you. Monk’s scoring outburst led the Hornets to an overtime victory against Miami on Monday. That was sandwiched by an 18-point game against Milwaukee and a 13-point output against Philadelphia. A 2017 lottery pick, Monk has never shot better than 34.2% from deep in his first three seasons and bottomed out at 28.4% last season. He’s made 52.5% of his long-range shots this season. Charlotte would have to extend Monk a $7MM+ qualifying offer to make him a restricted free agent this summer. The Hornets might opt to deal him this winter but Monk will continue to pump up his value if he keeps shooting like this.

Snell had a player option that was much too lucrative to turn down last offseason. When he becomes an unrestricted free agent this summer, he’ll be looking at substantially smaller offers that the one he received from Milwaukee in 2017. Snell started regularly for Detroit last season but he hasn’t gotten much floor time with Atlanta despite several injuries to wing players. He played a season-high 24 minutes against Utah on Thursday but once De’Andre Hunter and Bogdan Bogdanovic return to action, Snell will reside at the end of the bench once again.

Nunn was one of the league’s feel-good stories last season, an undrafted rookie who graduated from the G League to become a starter with the Heat, then finished second in the Rookie of the Year voting after averaging 15.3 PPG and 3.3 APG in 67 regular-season games. However, he lost his starting job in the Orlando bubble following a bout with COVID-19 and hasn’t regained it this season. Nunn was playing regularly when Jimmy Butler battled the virus last month but he has fallen completely out of the rotation the last three games. Avery Bradley‘s latest injury should allow him to regain his spot. Nunn’s qualifying offer is a meager $2.1MM if he doesn’t meet the starter criteria, so he’ll likely become a restricted free agent. Still, it’ll be harder to land a big offer sheet from another club if his playing time continues to wildly fluctuate.

Smith has carved out a nice career as a second-unit sparkplug. He’s always been capable of tossing in a 20-point night with his quickness and driving ability. Those outings haven’t occurred this season. He’s only reached double digits once despite averaging a steady 20.7 MPG. He’s still making a positive contributor with his passing – he’s averaged 7.0 assists the last five games – but he’s 1-for-12 from the field in his last two games despite playing 54 minutes. At 32, Smith will find it increasingly difficult to get offers ahead of younger players. That reality could strike as early as this summer.

Bucks swingman Torrey Craig suffered a nasal fracture on Sunday against the Knicks and won’t play against the Heat on Tuesday, the team’s PR department tweets. Craig signed with Milwaukee last month after the Nuggets failed to extend a qualifying offer.

We have more injury and COVID-19 news:

James Harden has reportedly added the Bucks to the teams he’d be willing to play for but acquiring the perennial All-Star guard would be very complicated even if Milwaukee wants him, as Eric Nehm of The Athletic points out.

Milwaukee can’t move nearly half of its players on guaranteed contracts since the club added six players via trades or free agent signings. Most of those players aren’t eligible to be dealt until late February. The Bucks’ proximity to the hard cap also makes it nearly impossible to trade multiple players for Harden unless a third party is involved or Houston tosses in some minimum salary players.

After reporting earlier today that the Kings passed on a Hawks sign-and-trade offer for Bogdan Bogdanovic that would have allowed Sacramento to acquire either a lottery-protected 2022 first-round pick or two future second-rounders in exchange for the restricted free agent, Sam Amick of The Athletic has updated his story with some new intel.

As Amick explains, that Hawks offer came with caveats. Atlanta wanted Sacramento to accept Tony Snell‘s expiring $12MM+ salary and asked for an answer within an hour. Additionally, the Kings didn’t know at that point what sort of contract the Hawks were offering Bogdanovic, so they were reluctant to agree to a sign-and-trade if Atlanta’s offer was one they were comfortable matching.

The Kings asked for some of the Hawks’ young talent in a deal, but didn’t have any luck, and Atlanta ultimately took its chances by signing Bogdanovic to an offer sheet. Sacramento didn’t match it.

While The Athletic’s new information lets the Kings off the hook to some extent, Amick says there’s “strong reason” to believe that Atlanta would have done a sign-and-trade for Bogdanovic that included a draft pick even if the Kings hadn’t been willing to take on Snell’s contract. However, sources tell Amick that scenario wasn’t discussed.

Here’s more out of Sacramento:

Isaac is recovering from a torn ACL and is expected to miss the entire 2020/21 season, so his absence is unsurprising. Aminu and Bamba were unavailable for the Magic at the end of last season due to knee surgery recovery and coronavirus complications, respectively. It’s not clear if those same issues are keeping them sidelined this fall, but Clifford said today that both players are still “a ways away” from being 100%, per Keith Smith of Yahoo Sports (Twitter links).

NOVEMBER 21: The Pistons likely won’t use the stretch provision on McGruder after all, according to Edwards (Twitter link). The team will save some money in its trade for Delon Wright and no longer needs the extra space that waiving and stretching McGruder would provide.

NOVEMBER 20: The Pistons have made a flurry of reported free agent moves and they’ll apparently clear cap space by using the waive-and-stretch provision on two recent acquisitions.

They’ll waive center Dewayne Dedmon and use the stretch provision to ease the cap hit, according to Vincent Goodwill of Yahoo Sports (Twitter link). They’re likely to do the same with Rodney McGruder, James Edwards III of The Athletic tweets.

Detroit officially acquired Dedmon from the Hawks on Friday in exchange for Tony Snell and Khyri Thomas. Dedmon was slated to make $13.33MM in the upcoming season with an identical contract number that was only guaranteed for $1MM for the 2021/22 season.

The Pistons acquired McGruder from the Clippers in a three-team trade that became official on Thursday. McGruder had a guaranteed $5.2MM contract for the upcoming season with a non-guaranteed salary of $5MM for 2021/22.

Those non-guaranteed years are significant because they allow Detroit’s front office use the stretch provision for five years instead of three, Eric Pincus of Bleacher Report notes (Twitter links). Since only the guaranteed money counts, Dedmon would only count $2.9MM against the Pistons’ cap over the next five seasons, while the cap hit on McGruder would be just over $1MM in those years.

The Pistons made the trade with Atlanta because it allowed them stretch Dedmon’s contract over five years, rather than stretching Snell’s $12.2MM expiring contract for three years, Edwards tweets.

Those moves will allow Detroit to ink free agents Jerami Grant and Mason Plumlee, as well as completing a sign-and-trade with Houston involving Christian Wood.

NOVEMBER 20: The Hawks and Pistons have officially completed their swap, as detailed below, per a press release from Atlanta. As expected, the Hawks have already waived Thomas.

NOVEMBER 19: The Hawks and Pistons have agreed to a trade that will send center Dewayne Dedmon to Detroit, according to Shams Charania of The Athletic (Twitter link). Wings Tony Snell and Khyri Thomas will head to Atlanta in the swap, per ESPN’s Adrian Wojnarowski (Twitter link).

The move essentially sees both teams trade from areas of depth. Dedmon, acquired at last season’s deadline from Sacramento, became expendable in Atlanta with the Hawks expecting Clint Capela back from injury this year and also preparing to incorporate lottery pick Onyeka Okongwu into their frontcourt.

Meanwhile, trading Snell and Thomas will open up more minutes on the wing in Detroit for the likes of Sviatoslav Mykhailiuk, Sekou Doumbouya, and Saddiq Bey, observes James Edwards III of The Athletic (Twitter link).

Dedmon will earn $13.3MM in 2020/21 and also has a $13.3MM cap hit for ’21/22, though that second year is only partially guaranteed for $1MM, per Basketball Insiders. Snell is on a $12.2MM expiring contract, while Thomas’ minimum-salary contract for ’20/21 only includes a partial guarantee. In other words, the deal is close to salary-neutral.

It remains to be seen how many of these players will be part of their new teams’ plans for next season. Omari Sankofa II of The Detroit Free Press suggests (via Twitter) that the Pistons aren’t done dealing and he wouldn’t assume Dedmon will stick around.