Hoops Rumors is breaking down the 2019 offseason for all 30 NBA teams, revisiting the summer’s free agent signings, trades, draft picks, departures, and more. We’ll evaluate each team’s moves from the last several months and look ahead to what the 2019/20 season holds for all 30 franchises. Today, we’re focusing on the Washington Wizards.

None of the NBA’s new heads of basketball operations had things easy this summer, but new Wizards general manager Tommy Sheppard was arguably thrust into the toughest situation of any of them.

After years of being unable to break through in the postseason behind their Bradley Beal/John Wall backcourt duo, the Wizards would have been justified in blowing things up this offseason and launching an all-out rebuild. Beal was coming off a career year and his trade value would have been at an all-time high if Sheppard had opted to make him available.

However, the Wizards’ other All-Star guard was on the opposite end of the trade-value spectrum — a torn Achilles will likely sideline Wall for most or all of 2019/20, the first season of his monster four-year, $171MM contract extension.

In order to move Wall without surrendering multiple positive assets, Washington likely would’ve had to tie him to Beal, which would’ve taken some potential trade partners off the table due to the sheer amount of money involved (the duo has a combined cap charge of over $65MM). It also would’ve seriously limited the return the Wizards could have realistically sought for their healthy star.

Ultimately, Sheppard opted to hang onto both players, which isn’t an unreasonable approach. Beal still has two years left on his contract, so the Wizards still have plenty of time to change course if they decide to move on or if Beal asks to be dealt. Wall, meanwhile, will always be tough to move on his current contract but could rebuild his value to some extent if he returns from his Achilles injury and shows he can still be a reliable on-court performer.

While Sheppard’s approach is understandable, it’s certainly not without risk. If Beal eventually requests a trade and that request goes public, it would negatively impact the Wizards’ leverage. And there’s no guarantee that Wall ever comes close to recapturing his old form.

For now, the franchise remains somewhat in limbo. A playoff berth is hard to envision, but the roster also doesn’t feature a ton of young talent with star upside to develop.

The Wizards’ roster overhaul this summer included the departures of several one-and-done players. Trevor Ariza, Jabari Parker, and Bobby Portis all arrived in midseason trades and initially looked like candidates to be re-signed, but Sheppard didn’t appear to seriously consider bringing any of them back.

Dwight Howard and Jeff Green were free agent signees in 2018 who won’t return this year. Injuries limited Howard to just nine games during his lone season in D.C. before he was traded to Memphis. Green was productive as a Wizard, but opted to sign with a team closer to contention once he reached the open market.

Tomas Satoransky was perhaps the most notable offseason loss for the Wizards. The underrated guard provided stability at the point over the last two years when Wall missed time with injuries, and was a nice fit next to Beal since he didn’t always need the ball in his hands. With Wall on the shelf and Satoransky gone in 2019/20, point guard may be an area of concern in Washington. 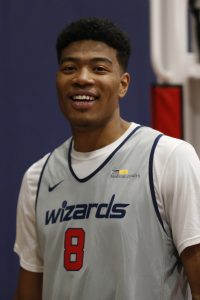 Not many mock drafts had Rui Hachimura coming off the board as high as No. 9, but the Wizards were happy to get him at that spot and are in position to provide him with consistent minutes right away. Hachimura, who projects to be a dynamic scorer, still has work to do on his defense and his outside shot, but he may be the closest thing the Wizards have to foundational long-term piece outside of Beal.

Having lost Satoransky, the Wizards addressed the point guard position by signing Ish Smith and Isaiah Thomas in free agency. Smith is reliable enough, though he fits in better as a backup playing primarily against second units. It will be interesting to see how he holds up as a full-time starter in D.C.

Of course, a healthy Thomas could force his way into the starting lineup if he looks anything like his old self, but we’re getting further and further removed from the All-Star version of IT we saw from 2015-17. He has been limited to just 44 games over the last two years and will still be recovering from thumb surgery when the season starts. Anything Washington gets from him this year should be considered a bonus.

Acquiring Davis Bertans in a trade with the Spurs for essentially nothing was a steal for the Wizards, who will rely on the young power forward for some much-needed outside shooting in the frontcourt. Bertans has made over 40% of his career three-point attempts, including 42.9% last season.

Finally, the Wizards sneaked into the Anthony Davis blockbuster between the Lakers and Pelicans by taking on a trio of young players – Moritz Wagner, Isaac Bonga, and Jemerrio Jones – from L.A. While it would probably be foolhardy to count on all of them to become regular contributors, the Wizards only gave up a small amount of cash in the deal, so they’d be coming out ahead even if just one of the three develops into a solid rotation player.

The Wizards didn’t have a bad offseason, but with Wall injured and taking up $38MM+ of the team’s cap room, the new management group just didn’t have the cap flexibility to add the pieces necessary to make Washington a strong postseason contender in 2019/20.

Still, this will be a big year for the organization. If the team exceeds expectations, makes a couple savvy trades, or just generally shows that it’s on the right track, it could go a long way toward convincing Beal he should stick around long-term, which seems to be the Wizards’ preference. If things go south, it probably won’t be long before the club shops Beal and goes all-in on a rebuild, which could be a long, painful process.

One thought on “2019 Offseason In Review: Washington Wizards”